Jaxsta usually has the same credits as Tidal as well. I’m not sure if there’s a Jaxsta API though. If there is, it’d be awesome because they also have the best country distribution list as provided directly by the label, and not just such store sells it in such country, so Tidal would likely be the best way as far as that goes.

Wow, awesome tip! They do have a freely available (not sure if there’s a cap to requests or if it’s good faith) API. They even credits in the format of which tracks a credit+person contributed to, so I won’t have to compile that data myself.

The tricky part, is they don’t have links to the artist/performer per credit, so autofill of artist from MB wouldn’t be possible…In the unlikely event MB adds relationship seeding

EDIT: their API is wide open. Can see myself writing a search function that returns anything we could want

I just deployed a small update so that Apple Music URLs are submitted with releases now instead of the deprecated iTunes URLs that now redirect to Apple Music anyway. The type for the URL relationship is set to “streaming page”.

Unfortunately he code is not easy to extend. As previously mentioned it’s in maintenance mode only as it would need a huge refactoring or probably just a ground up rewrite to make it extendable and maintainable.

I actually implemented a Ruby client with support for querying MB, Spotify, Deezer and Bandcamp earlier in the year but unfortunately real life stuff took over and I haven’t had the time or inclination to work it on any further. I even got to the stage of hooking it up to a simple Ruby on Rails app to test some design ideas (this release had a massive description which screwed up the column alignment): 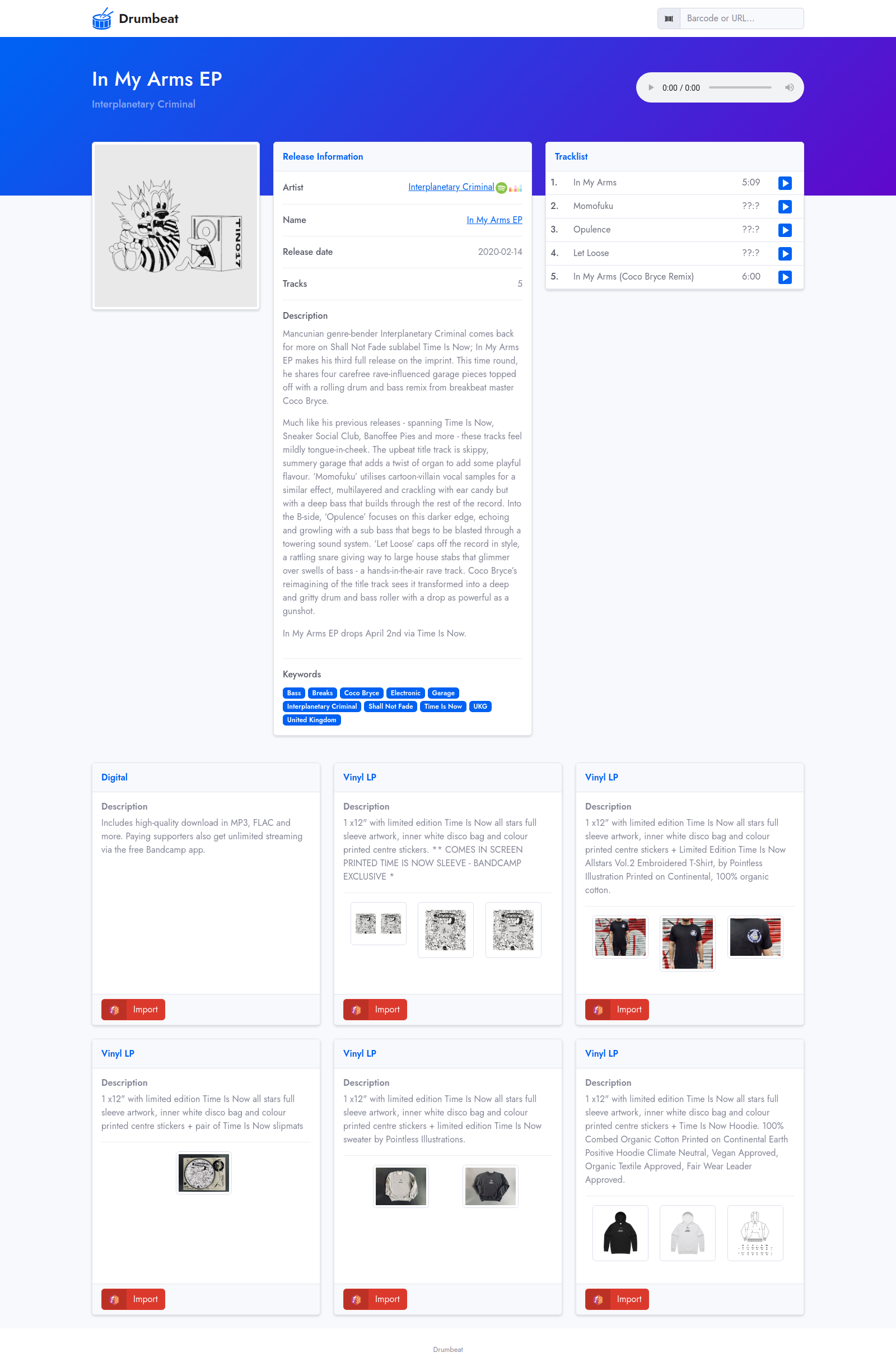 I managed to get the audio player fully working, which I think would be a nice feature given that most of the services provide preview links in their API responses.

I doubt I will have time to work further on it until later this year, so it sounds like @Chilkara might have a suitable replacement ready before I do.

The tricky part, is they don’t have links to the artist/performer per credit, so autofill of artist from MB wouldn’t be possible…In the unlikely event MB adds relationship seeding

You might be able to get relationship seeding working via a userscript. It’s not ideal but would be better than nothing. I managed to a implement a userscript for seeding artist links via URL parameters. Dealing with the relationship editor would be more complex but I’m sure @ROpdebee could work his JS magic!

This actually looks very clean. The description would probably be a simple ellipses cut after a certain length.

My Jaxsta project, I got everything parsing and displaying nicely. Need to pick it back up and finish it

Is anyone having issues with apple music? When I paste a link in to the seeder it loads to a blank page.

On the original (MarlonOB), it will do that sometimes if you don’t also have the barcode there. Try the mirror, it should work there. You can find the barcode by right clicking on the Apple Music page going to “view page source” and searching for UPC.

thanks tigerman325, I had no idea there was a mirror we could use, using the mirror let me import that link that wasn’t working!

When using these seeders, sometimes I find out a release only excludes one or two countries from the list and it creates a release event for 200+ countries.
Is this the intended way of using it? Or should I set it as Worldwide and use an annotation to list the two excluded countries?

Only mark Worldwide, if it exempts British Indian Ocean Territory. That is not really a country and it has zero permanent residents that live there. I’d double check with Jaxsta because, especially Sony Music Entertainment releases, has the release Worldwide, but doesn’t put it on the 3 (Apple Music, Spotify & Deezer) services in a certain group of islands. You start to recognize the patterns the more edits you do. But on almost every release that Jaxsta has shows it as Worldwide. But if you don’t get verification from Jaxsta, I’d go with what a-tisket returns. Jaxsta gets their country distribution list directly from the distribution labels.

Thanks!
I’ll keep the long country list then!
I was wondering because I found a release where the only excluded country was Curaçao and I was quite puzzled.

I remember someone upthread (@tigerman325, was it you?) mentioned that Curaçao is listed as excluded due to an API error on Deezer’s end, and that their service is not actually available there.

Yes, the mirror isn’t always right. I only use it for iTunes & Spotify, but it’s wrong on Deezer. There are many instances where China & Curacao show up as excluded, but if you run it on the original, it doesn’t show this. This is because it removes countries that the Deezer API shows as having the release, but Deezer says they don’t support. Long story short, if Deezer has the release, run it on the original because it’ll give you a Worldwide result more often than the mirror will. Spotify isn’t in China, so it can’t override the removal from Deezer’s list. And Curacao was an addition in 2020, so many releases before that aren’t in Curacao on Spotify, even though they are in Deezer, and the mirror removes that positive result. Also, between 20-30 countries more show up on most releases that are on Deezer.

Thanks!
I’ll edit that later then!

It looks like the code excludes tracks which are not marked as “song” from iTunes API responses on purpose (e.g. videos, booklets).
I did run a test with your first example release where I allowed tracks which are marked as “music-video” and it kind of worked in this case: 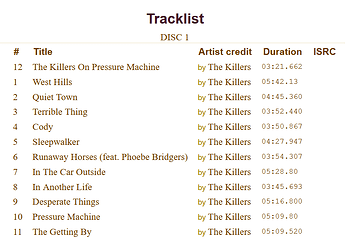 Not sure why the video is displayed first although its the last track with the highest track number in the API response and there is no reordering done on a-tisket’s side.
While it would be easy to simply sort the results by track number if that is the only thing which is necessary, I wanted to try another example first and found one which used to entirely break a-tisket because the video tracks were the first items in the iTunes API response (even before the album item itself). 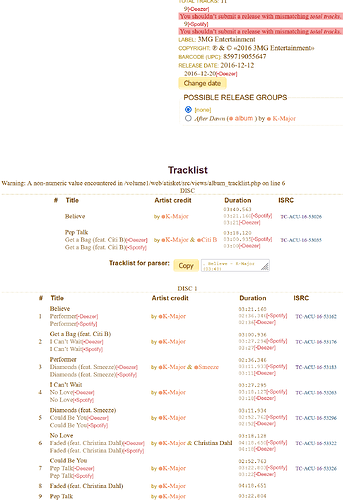 The second example definitely is a bug but I don’t have the time to also have look at this now, maybe later

Edit: Scratch that, the second example seems to be an Apple Music exclusive release for which the iTunes API does not return any tracks (only the album item), so unfortunately this is a “won’t fix”

It doesn’t recognize videos. Always be looking at the Apple Music page while editing and don’t rely solely on a-tisket. The iTunes importer many times also misses videos, so it’s something to do with the way the iTunes API is set-up. Also, if a-tisket says it found the release but couldn’t find a tracklist that means that the release is not on iTunes, but only Apple Music. a-tisket does not have access to the Apple Music API, only the iTunes API.

I’ve never seen a release that has the same barcode be the same as one with videos on iTunes. I just clicked your link in this example and the Apple Music release doesn’t have any videos. I’ve noticed that in the iTunes API they show the promo videos they link at the bottom in the music video section. This is not part of the release, just links to other videos. But many releases, such as The Killers shown above as an example actually has videos in the track listing.

Note: Do you have access to make changes on the page??