how do you check the history on Discog release? and what do liner notes look like? and how do you search for info on a catalog number?

how do you check the history on Discog release? 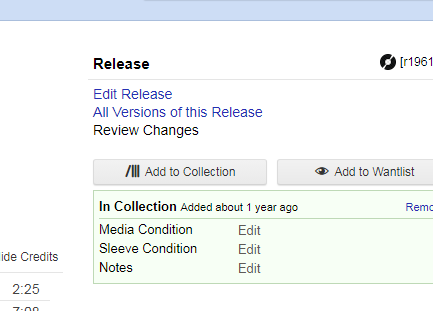 Pick up that old vinyl record. Pull the inner sleeve out that holds the actual record. That inner sleeve is normally covered in lyrics \ notes \ etc. That is the liner. So the liner notes are what you have already been using as reference material. With a CD that will be translated to the booklet.

and how do you search for info on a catalog number?

Personally answer here is I will search cat numbers here, discogs, Google. I’ll locate the label pages here and at Discogs. Look for patterns. Also checking Wikipedia and fan pages can help. See if I can link it to other releases, etc. (Harder question to answer without the context for “what info”?)

another two question are if an album is compilation of another album and the compilation album does not have the performers and only the writers (the people that came up with the song) and the albums it came from have the performers who would you put as the artist?
and if an album has the writers and the producers who would you put as the artist?

Any info? In that case - any search engine. Or more accurately I end up with a heap of fan type discographies along side wikipedia \ discogs \ google. Ebay can be an interesting source to. Depends on what you are trying to work out.

Is that some kind of brain twister? Examples would be easier to answer with.

Now I assume you are not talking Classical as that has its own set of rules.

In your example the RECORDINGS will be the same and linked together. So the RECORDING level it will have full credits of the artists. And you can even set the WORKS up there and give the writer their credits.

But when you enter the details of the TRACKs on the second release then it all ends up credited as per the cover art. So in that case the “artist” will be as per the cover who is being shown as the Writer.

and if an album has the writers and the producers who would you put as the artist?

You have not told me what is written on the cover artwork. Not enough information to give an answer. now lets say the album is not a compilation or the albums it comes from do not have the performers and all thats on it is the writers and the two kinds of producers who would you put?

Various - War In The Heavenlies

Trying to understand a little bit more of the context here. What do you have in hand? Do you only have digital copies of these? So there is no CD Artwork to work from? Just these odd web resources?

That first link just shows me lots of Releases, with only one name to each Release. So that is the only name available to be used as artist.

Lack of any images of the releases means there is nothing to work from. So best guess is all you have.

With “producers” then their credits are done with the Relationship Editor. do you have the “Edit Relationships” tab when looking at a release? Or is that something I got from a script?

I’d use that to get the producer and executive producer credits added to each of the recordings. I would never bother adding a Producer at a track level.

On teh Discogs example taht seems a sensible way of doing things. The compilations are clearly a repacking of repackaged stuff which are loosing more and more of the connection to the originals. I’d concentrate on getting the RECORDING credits the most accurate in those cases as the artwork is clearly hopeless. then find a consistent solution for the Track credits based on teh artwork available.


here it is on discogs

I would enter that one with the Release Artist as Graham Kendrick.

Then add all the separate credits from the Wikipedia page in at Recording level.

It looks to me like Graham Kendrick is “leading the band”. And he is the “name” on this. He is clearly of high enough standing to be the only name proper on the front cover of the CD.

I expect if Graham Kendrick then goes to a different church and “leads a performance” there he may well have different vocalists, musicians who do the performance. This is why his name would be up front. Just like an artist like Elvis would often change the musicians he worked with, it was always his name on the front.

I am intentionally trying to think “Rock Band” when looking at your releases to find a way of matching names \ ideas. I think Rock\Pop band is a better fit than Classical.

Various - War In The Heavenlies

thanks iv started dooing that but iv run in to a problem 2 artists have been made that are the same artist i need help merging them. should i merge Martin J. Nystrom into Marty Nystrom or vice verser? im 100% sure they are the same. on most of the albums on the web he is Marty Nystrom

Merge in the direction of keeping the one with the MOST details, biggest edit history.

Or if equal you aim at the oldest.

In that example I would merge “Marty” into “Martin J”. then once merged I’d make sure “Marty” is an available Alias of “Martin J”

ok thanks for the help
is there a way to pm someone on here?

There is no PM system. It is all just open Forum. So you can “summon somone” by mentioning them with the @st3v3p command. That may work. Or just reply to a thread they are in.

The closest you can get to PM is to see if the “send an email” will work. Or that may just be on the MusicBrainz site. That assumes people are watching the mailboxes that are registered which may not always be the case…

Whoops - close, but no cigar

Don’t tick the “rename artist” box. By not ticking it you’ll keep the Marty alias in place for that Best of Marty release.

ok thanks for the info. i was just thinking that maybe some things other people may not be interested in so i was thort PM would be the way to go. there are some eddies i made not long after i joind that i may need to revert back or add more info to like One One Heart At A Time by Don Francisco and
100 Bible Songs for Kids by The St. John’s Childrens Choir
if some one can have a look at them that would be good. i dont have the disc for ether the

The “no PM” thing means that the community is more community. Always good to hear other opinions

Never worry about filling the forum up… it is what it is here for.

And making mistakes is best way to learn anything.

I’ll have a look at your other items in a bit. I know I have been back over some of my earlier edits and corrected a few based on knowledge I now have of the system here.

It is also funny seeing some of the earlier arguments I had with people while still trying to get my head around the bizarre guidelines. Guidelines that are not helped by not all of them having being written down as some of the rules are “learnt knowledge” from the forums… All adds to the fun.

One Heart At A Time by Don Francisco and

Looking at that one I think the main mistake is you have only put in ONE release. That should be TWO different releases. One for the Aus edition, and another for the Europe edition. But both point to the same Recordings.

As the artwork is different, then they are different releases. I expect they have different barcodes for those different territories too.

If I was working on those, I would also borrow some of the Discogs artwork to show those differences between releases. Just make sure the edit note says it is Discogs art.

Aha - spotted an error. You set the Release to Cassette and then pointed to LP editions. Ideally correct the media type at MB to what you have, and then link to the same versions at Discogs.

iTunes links don’t have to be to the US store. Point to the store that is local to the release. So if it is an AUS release then point to the AUS iTunes store.

100 Bible Songs for Kids by The St. John’s Childrens Choir

With this one it looks mostly fine. I notice in your edit notes a heap of links. I would add those links to the actual release (except the EBay one).

Ah - an obvious mistake. You set it to “Digital Media” instead of CD. Or if you only have Digital Media, then the links shouldn’t really be there as they should be attached to a CD edition.

To get a picture of a normal Release Group with all the complexities of the madness of all the different editions, have a look at this one: That may be a better picture of where the above two examples are getting confused.

. I need people like you to give me a hand every now and then so thanks

If anyone on the forum ever complains about being asked for help then I think they are in the wrong place. Especially as this place has some of the weirdest guidelines around.

There are certainly some people on this forum who love to shout and scream. Or want to lecture. OR are locked in their little worlds and forget that not everyone out there is “normal”. I am far from “normal” and some of the comments I’ve had directed at me have hurt. But then the person doing the shouting will not have realised the effect of their words. They cannot see my face.

So I take a time out from this place… know that the shouty idiot is really the one with the hidden issues. I take some breaths and return. Usually I have then learnt what I did wrong and then adjust to better deal with the issues.

My attitude is to dive in and make the mistakes. And in untangling the mess one learns soooo much more about it all.

Any time I have the spare time, I’ll help out where possible. Just ping a message in one of these threads, or @IvanDobsky me. Though some days my head is on upside down and I can’t help too well.

Note: I am on GMT up here… where the Cricket comes from.

And will be on here at random times when bored or annoyed with the world.

nw all good yer i know all about GMT. im a gamer so i interact with people from all over the world

I’ll add a few more notes to the post a couple back as to errors I’ve spotted on those two you asked to be checked. The main problem I am seeing is that you have missed that a Release should be different for each Media Type (LP\CD\Cassette\8-Track\Digital Media) and for each country of release.

And then the links to Amazon\Discogs\etc should also match that same media type.

We’ll sort this all out over the weekend. I’ll be on here at various times.