Record label gets mistaken as artist?

So I noted that currently MusicBrainz has artist entries for:

But I digged into Mitsuki’s home page and some of the albums that she released, and it seems that ABSOLUTE CASTAWAY is just used as the entity for marketing and planning of her work, and the actual performer should be just Nakae Mitsuki. 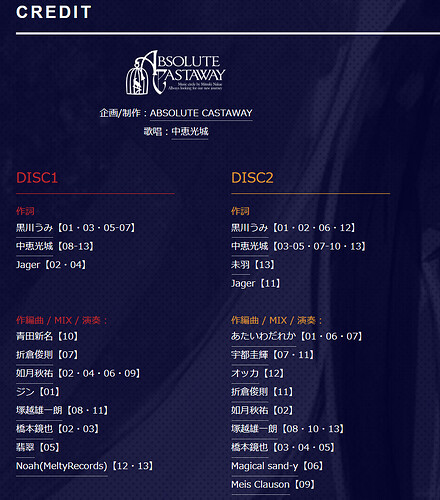 Should I merge both artist entries, and keep ABSOLUTE CASTAWAY as just a record label entry? I would like some suggestion on how to deal with this issue.

There is a discussion on cataloging the music of doujin circles here:

How should we handle doujin music? MusicBrainz

There’s an area of the Japanese music industry that I’m just starting to wade into. It’s known as doujin (or dōjin) music and there’s a Wikipedia article about it here. Basically, they are amateur individuals or groups self-producing music that are often “tributes” or “inspired by” official franchises (kinda like fan art, but for music). But there is also a lot of original music created by these doujin artists. You may have heard of vocaloid, or the character Hatsune Miku that features a lot in …

I would expect the “group” to be kept separate from the person regardless of what release artist and track artist is chosen.

My current approach is to keep the entities as-is, and added a “performs as” relationship between the two. The rationale of adding this relationship (besides the usual member relationship) is explained here: https://musicbrainz.org/edit/78727781

When it comes to attributing individual releases, I will use 中恵光城 as the artist by default, unless online or printed materials suggest differently, and use ABSOLUTE CASTAWAY as the label.

I don’t know if there is a better approach, but it seems that at least one other editor thinks it’s the preferred way for now: https://musicbrainz.org/edit/78725459