While submitting releases with quad or 5.1 tracks, I keep running into the same problem: Should the channel information be included in the track title, like appending “(5.1)”, or should this go into the recording disambiguation field?

a) It certainly looks cleaner to have only recordings of the same title and add channel information to the recording disambiguation field.

Is such a script possible and would someone knowledgeable volunteer some code?

It is very easy in MusicBrainz to add disambiguation to track titles. I’m not on the right computer to copy and paste the code, but as one of the premiere 5.1 title editors, that is the approach I take.

Thanks, when you say Musicbrainz you mean Picard?

That does not work for me, you have the escape the brackets (and you don’t need replace IMO). Here’s what I do, because I prefer square brackets for disambiguation and round brackets for ETI:

If you want to have round brackets, you have to escape them:

FYI, the related edits where this discussion came up: Medium edit and associated recording edits

Edit: I replaced the direct link to the medium edit by a search link to all edits, because I want votes on all of them.

I would vote to keep this in the track name until there is a way of storing that kind of data in its own field in the database. Until then don’t do edits to the database that will loose information for people using this database.

Ideally there would be way of adding number of channels to recordings as a data field. When\if that is possible, then I can see the logic of coming back to this debate.

The (4.0 mix) is an important difference and should be kept as part of the track title. Don’t forget that most people using MusicBrainz do so without extra scripts. Meaning the majority of users never see those Track and Recording disamigurations. Fire up a browser without the scripts and have a look what “normal” users see on MB.

Also remember that there are many users of this data who never see the database, but use external tools to lookup their music data. Not just Picard.

The suggestion for always adding disambiguration text to files using Picard will lead to all kinds of extra text that is not always wanted on the files. You’ll be asking users of the data to keep toggling this on and off.

Not everything is written into the guidelines, but I have seen the general practice for SACDs is to include the channel data in the track names. The tracks sound VERY different on four channels than two.

The Dark Side of the Moon (30th anniversary edition)

Floyd is even more relevant in this conversation as there are different multi-channel mixes that sounds different to each other depending on who and when they were done.

The (4.0 mix) is an important difference and should be kept as part of the track title. Don’t forget that most people using MusicBrainz do so without extra scripts. Meaning the majority of users never see those Track and Recording disamigurations. Fire up a browser without the scripts and have a look what “normal” users see on MB.

I totally agree that the number of channels is a very important piece of information that should be stored in the DB. But abusing the title for it is a suboptimal approach.
Such information should be kept as disambiguation as long as we don’t have extra fields for this. Releases and recordings can have these disambiguations which are visible on their respective pages, but unfortunately tracks do not have a disambiguation (and the recording disambiguation is not shown for tracks by default).

Therefore the main point of my edits is to change the recording titles, the change of the tracklist is just a side effect of a simplified workflow and I’m willing to cancel this edit: I simply moved the channel information from the ETI into disambiguation, because this seems to be a common agreement for many multi-channel releases. Please pay attention to the track titles and recording disambiguations (open the recording pages if you can’t see them) of the following examples:

Wish You Were Here

A Trick of the Tail

Every Breath You Take: The Classics

I’ve also changed my above link to the edits, because I want votes on the recording edits too and not only on the medium edit which I’ll probably cancel anyway.

Yeah, I can maybe see the logic of having this in a Recording title and a clear disambiguration, but let some of the tickets get dealt with that put this data somewhere safe that it can be used.

This is still removing vital information for other users of the database. When was the last time you looked at those pages WITHOUT your userscripts enabled and LOGGED OUT?

Have a look at a recording on a Web Browser which is NOT logged in to your MB account and Not running scripts. There is no trace of the disambiguation text. https://musicbrainz.org/recording/06fc551f-565f-413e-a443-5a03f1460ae0 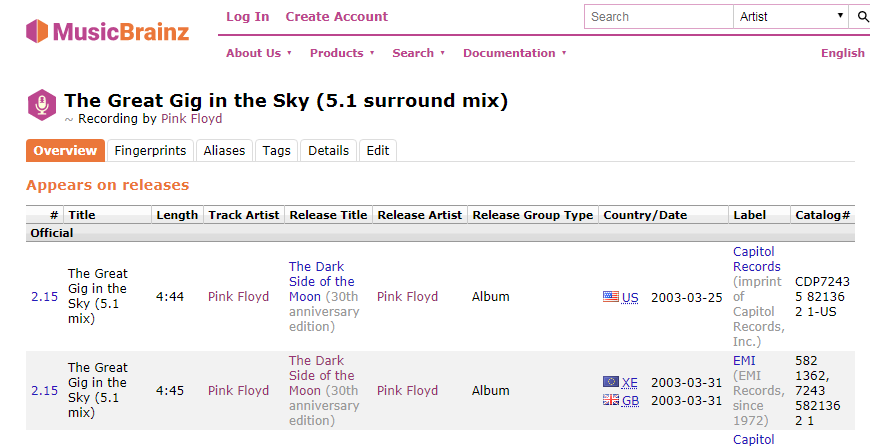 I also worry as to how fragile disambiguration text is. What also concerns me are those people who merge on “title and length match”. And then they just blindly push the merge to the oldest item. In the process they loose the disambiguration text. (There are some heavy editors who do this rather too often

Your example shows no disambiguation, because it has none. The following screenshot was taken w/o userscripts and being logged out:

The disambiguation comment is one of the few fields that is shown everywhere – when it is filled out.

Sorry - I am doing too many things at the same time here. 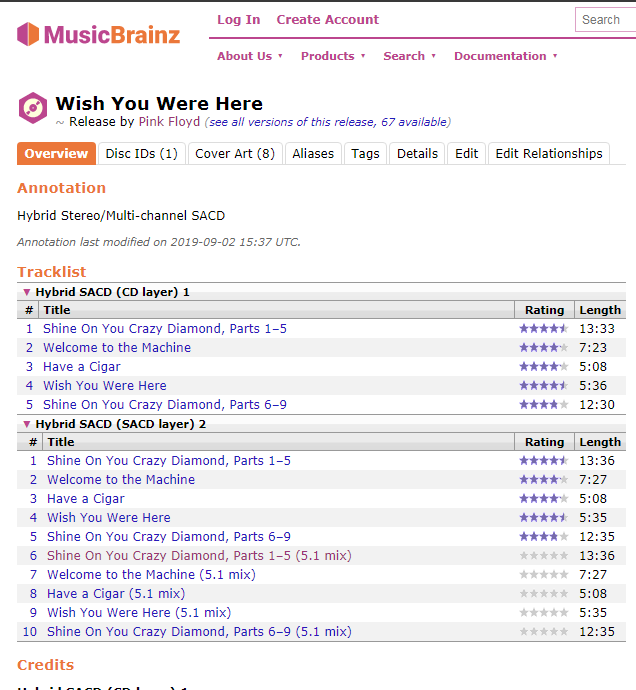 And disambigurations are lost in a merge if done in the wrong direction.

And disambigurations are lost in a merge if done in the wrong direction.

Using your example the disambiguarion is on the Recording page, but not the Release page.

That’s exactly the example I would go after: Disambiguate recordings and abuse ETI for the track titles because they have no track disambiguation field. When we finally have the correct field for channels this discussion will be garbage of course

So you know the people I mean.

Trouble can be made worse as some merges can fly through within a day if they get the popularity votes. And then the channel data is lost… so their next merge will be to merge the multi-channel version into the stereo version…

That’s exactly the example I would go after: Disambiguate recordings and abuse ETI for the track titles because they have no track disambiguation field. When we finally have the correct field for channels this discussion will be garbage of course

I loose track of the tickets and don’t go there.

Maybe there is a ticket from 2012 to fix some of this. Or even a ticket to MERGE the disambiguration text when the target is blank…

All I am asking is wait. Wait for a time when data can’t be lost. At the moment I can’t really see a need for deleting this. I know if I was talking about these recordings to someone I would certainly mention the number of channels as part of the title.

At the moment I can’t really see a need for deleting this.

I don’t understand why you are so concerned about losing data, because the only thing I did was to move 4.0 mix or quad mix from the recording title into the disambiguation:

This is exactly the same that was done for the WYWH SACD. Maybe I should just cancel this damn medium edit that seems to confuse everyone. This edit is the only one that would have “lost” data and I only kept it open for general discussion

Because once it is gone through an “Oldest MBID Merge” - it is gone.

Maybe the confusion here is the same I cleared up for myself on the testing server. We all agree that we want to keep the channel information in the track title. That is what this here thread is about.

Then there is the separate question of how to format the recording title. As I have verified on the testing server, changing the recording title - which initially has the same name as the track it is based upon - by moving the channel information to disambiguation will NOT affect the track title.

@IvanDobsky maybe run some tests at test.musicbrainz.org so we’re all sure we’re talking about the same issue?

Addendum: OK, I didn’t get your concerns about disambiguation being prone to vanishing when merged with other recordings. I don’t have enough experience to chime in there.

It is common for an editor to just look at two tracks and see matching names and track times. They then decide these are the same recordings. So they merge them into one. When doing that they pick the “oldest” MBID as the target and hit merge.

It is normal that people make mistakes – in this case merges into the wrong direction. This is the reason why we have the voting system, you can vote against such edits that are destroying data. But you should not vote against edits that comply to both the guidelines and common sense only because someone in the future might destroy the resulting correct and well organised data.
Having information as ETI does not prevent people from merging into the wrong direction, I have witnessed that. So there’s no place for this data which is safer – some editors remember to adapt the target’s data during or after the merge, but some do not.

It is normal that people make mistakes

I know mistakes are made, but it is also impossible to catch every single edit. Some merge edits can happen very fast if there are a lot of votes. But this is an off topic tangent that should go into a different thread. Especially as I am having one of those days where I can’t write clearly. Sorry. I’ll delete the post is probably better. This is not suppsed to be a conversation about merging mistakes. All I was trying to do is highlight that data that ONLY lives in a disambiguration gets lost by accidental means.

Guidelines clearly state to keep ETI on names. Not sure why so many move to disambiguation, but it’s not correct according to guidelines. This doesn’t change because it’s a recording and not a track name. Especially when all associated tracks have the ETI in their name.

Please link the guideline that you are thinking about.

IMO, when it does not appear next to the track on printed tracklist, it should go to comment. Including in the cases of a title of a trackset, MBS-6680.