After musicbrainz has done its magic collecting all the metadata. Sometimes the cover art is missing.

What I currently do, is google the album and use windows snipping tool to grab the image. Then drag and drop the image onto each file track and then resave the album.

I can’t seem to drop it onto the album so all the songs get it. So I have been doing it individually, little time consuming though it gets the job done. Is there a quicker way??

Have you considered adding the images to musicbrainz?
I mean, it isn’t going to help you. But it will help the database in general.

Give this a try and see if it works for you (because it works here with Picard 1.4.2 on Windows 7). 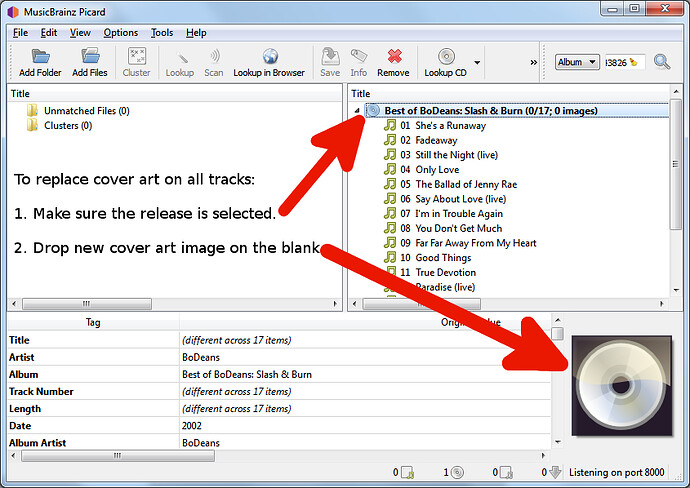 Maybe you can try Jaikoz. In Jaikoz it’s possible to add the image (front and/or back cover(s)) to all tracks of an album at once.

I have though, I’m not overly fused on what picture i use. Sometime I will just put a picture of the band/ singer. Doesn’t mean its the correct cover art

That worked rdswift, I was doing it the wrong way, thanks again

Excellent! Glad I could help.

@rdswift’s answer is correct, but I discovered that it only works when you drop your image file onto the album cover slot before adding your music files to the album, in order for it to be automatically applied to all the music files when you add them.

If you already have your files attached to the album, you’ll have to remove them before dropping the cover, or you’ll be stuck with having to apply the same cover individually to every single track.

I’m pretty sure I’ve added tracks to the album after artwork as been applied on a regular basis.

Just to be clear, is this on the right or left?

On the former, I’m just not recalling ever having issues with tracks and any metadata not being applied where as on the latter, yes- anything that was not present/selected when a change was made will not inherit changes.

Due to the nature of the way Picard works I wouldn’t see that as a bug. The Right is all about MBDB values with regard to a release. You’re building that release to save it. Yes tracks / tags can individually be selected and set to use edited data or their original values as an exception.

The Left side is the workbench and shouldn’t be doing any kind of change on it’s own.

This would be a bug, yes. I haven’t tested this myself yet. I think rdswift had already added a ticket for this.

EDIT: The issue is at https://tickets.metabrainz.org/browse/PICARD-1269 , and @edgeztv discovered it before me

But as I commented there I can’t reproduce this. Applying cover art to the album and having it used for all the files works for me, no matter if I do drop the new art before or after matching the files.

I always do it after matching the files, and it seems to work for me.

Me either, it’s always worked no matter what order when working with the Right side.
Don’t “fix” it on the Left though. An Album is one thing, but a Cluster may not always be an Album