Superlative Music Recordings is a fake label set up by Jered Threatin. In MB the start date is set as 2006-04-07 and I wonder where that date comes from. Wayback Machine shows no activity at http://www.superlativemusic.com/ until recently and that corresponds with Threatin’s first release in the latter half of 2017. The start date of the “label” is now said to be 2006 on their website, but earlier it said 1964 (see http://rockmetal.news/jered-threatin-also-created-a-fake-record-label-fake-press-outlet-fake-award-and-fake-web-design-company-to-promote-his-band/ ).

Your answer lies in the edit history:

Scroll to the bottom and you see the details being initially entered in August this year.

There is also a common theme to all of their edits:
https://musicbrainz.org/user/MagnifiedMedia/edits

The problem is this same person is no doubt on all the other user editable databases creating the cross linked “proof” of all of this. Bet if you were bored enough to chase all the links you’d find they only ever edit Threatin’s entries over there too.

Meanwhile… I think you’ll find that “superlativemusic.com” is not in the Wayback machine because it only came into existence as a domain on 29th March 2017 according to the WHOIS database.

Yeah… these guys are inventing a neat little history for themselves. “I read it on the Internet - so it must be true” (Can’t work out where the sarcasm font is…)

Hahahaha - it is quite funny when you start following some of those links elsewhere. His odd marketing has clearly been rumbled. The funniest are the comments on Last.FM about how suddenly he gained lots of listeners in a single day… hints of paid marketing sock puppets.

Listen to music from Threatin like Living Is Dying, Breaking the World & more. Find the latest tracks, albums, and images from Threatin.

I think he also needs to sack that photographer. Is it just me or has that obviously one photo session led to some odd looking photos. The fact he looks identical in all of them is a bit too weird.

Surely MagnifiedMedia would not be so daft to use their own name on a fake campaign like this? Otherwise it will lead to MagnifiedMedia being linked with faked scams. (Hello Google Spiders).

It also shows exactly how not to do a campaign if it stands out so comically to a few people on these various musical websites.

I started to read your news item you linked - quite funny. That should be added to the artist’s page in the links section. I’m going to give that a read in a bit as it looks quite interesting.

without going and reading edit histories and old websites…

Don’t most artists “create” a label to give them more credibility?
Especially in the modern era, since technology makes “basement tapes” sound like professionally mastered cuts?

Don’t most artists “create” a label to give them more credibility?

There’s kind of a difference between making up a name to release your material under on the one hand, and claiming your label has been around for 40 years and sold 10 million units on the other.

What I don’t get with this whole thing is - how can they be so arrogant? Do they seriously thing no one would look back in history? That record labels claim to have been around in 1964 is comedy gold. Did they really expect no one to question them?

Now that Wikipedia has written this up I have updated Threatin’s MB page to include that link.

Will also add the rockmetal.news item to the Record Label page. This is all good information to keep together. It gives the clear history of what this whole event is \ was.

As much as I don’t like giving promotion to situations like this, if we are going to host the information, we should do it correctly.
Threatin should be changed to a band, with a new entry for Jered Threatin as founding member who also founded the record label. And then the band can have the other members, and their releases. And the individuals can have information added as it arrives.

MB is an ‘authored’ site. The band exists. We should host the information. Let WP and Rolling Stone do the commentary on its validity.

Threatin should be changed to a band, with a new entry for Jered Threatin as founding member who also founded the record label.

As far as I can tell Threatin is not a band as the only member is Jered Threatin.

As far as I can tell Threatin is not a band as the only member is Jered Threatin.

I agree. This is a solo artist performing. Look at the edits and the way it is termed by his marketing team. Jered Threatin performs as Threatin. And then hires musicians in to play alongside him.

Look at that news article which shows the musicians hired for the “tour” left in the middle of the “tour”.

Notice how all the photos only have Jered in them. I’ve not seen one with any of the other musicians apart from a few “live” videos.

I still haven’t seen a photo taken outside the initial photo shoot either. How is that man so pale? He must have been kept in a cellar away from the daylight. He is scary pale - almost ill looking. Almost feel sorry for the guy.

Updated with a Wikipedia quote:

Jered Threatin began the namesake band as a solo act after moving to California in 2012. In 2015, Threatin released a single, “Living is Dying.” In 2017, the album Breaking the World was released, with Jered Threatin performing all instruments.

And if anyone wants to add in the other musicians that played along side him, those facts were on the same Wikipedia page. Maybe they didn’t like playing to empty rooms.

http://www.superlativemusic.com/ shows 2006 as start date on main page, and 1964 after you click “HISTORY” on the upper menu.

@Ataki Have a read of the rockmetal.news item in the first link. It shows you the original faked 1964 history, followed by a replaced 2010 history. Soooo much of that site is broken. And all the other bands listed are fakes.

It’s on the BBC News now too. Good write-up 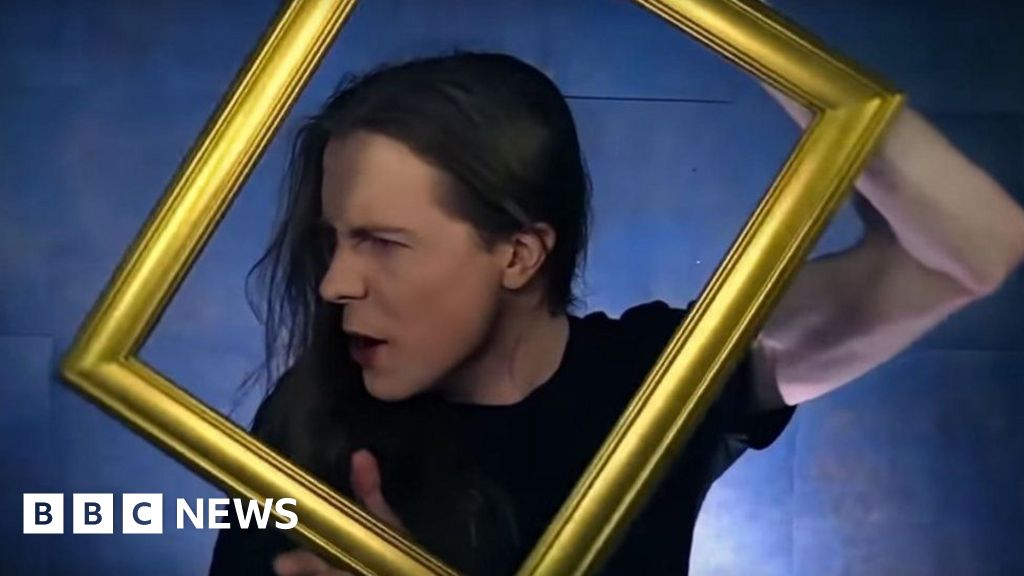 The band who faked a fanbase and failed

LA band Threatin booked a tour promising hundreds of people would attend - but no-one showed up.

This is a fascinating example of how not to do Marketing. Must be a start-up marketing team in well over their heads. This HAS to stay here in MusicBrainz for those people who want to track him down in future.

This HAS to stay here in MusicBrainz for those people who want to track him down in future.

THAT is what I was alluding to earlier. Or, maybe the speaking against would be a better way of putting it.
MB doesn’t get involved with hype or scandal. MB has no notability (or, in this case, notoriety) requirement, MB simply fills out the data. His music, since it exists, can be on MB without anything else getting involved.
Let the reporters write the hit pieces. Let Wikipedia write their freeform information. MB has a form, we fill in the form.

BTW, I do not know a single business that has never done this. Technology just makes it so much easier.

The Spotify account has gone - or the link goes nowhere now.

Fascinating to dig around this one. I have found other photos… and it is more looking like a single guy doing all of this. Including the Marketing company. Wow. I wonder where the money came from?

But I can’t forgive him now - he is holding our flag upside down!!!

366 Likes, 6 Comments - Threatin (@jeredthreatin) on Instagram: “Tell England I'm Coming... Get your tickets now. I'll see you there. For Tickets go to:…”

Or maybe this is a secret signal from him. This is a distress signal when you hold the flag inverted like that.

@justcheckingitout yeah - I get what you are saying. The core details that need to be recorded here at MB are about the music, what was released, when, and in which formats. I assume “Event” should also include the tour details.

I find this a fascinating set of events though. And thanks to MB I have learnt a lot more about it. I still think Threatin should stay in MB as an individual. He plays all the instruments on his own album, so the session musicians are hired for just the tour. And walked out before the Belfast gig.

Hang on… that’s a point… why is he holding an Irish flag on his Instagram page? Did he not realise he was still in the UK when in Belfast?

There is an interesting puzzle for the OP though. What do we put at the start date? The real side of this looks like it started in 2017. Yet the faked links and references will claim much earlier.

Of course, all the verifiable data should stay. But the hoaxes are notable in as much as we’d normally assume that what a band or label says about themselves is reliable, which it clearly isn’t in this case. The label should exist in MB but its start date shouldn’t be set to 1964; it probably shouldn’t be set to 2006 either, since there seems to be no evidence of that. We shouldn’t create artist entries for all the fake artists that the label claims to have signed.

We shouldn’t create artist entries for all the fake artists that the label claims to have signed.

@highstrung There is already an edit in place to delete the fake date.

I think it makes more sense to change that to 2017 as that is what the evidence points to. Domain setup in March 2017, Twitter account appears in April. Album release in August.

I wonder if any physical singles ever existed? OR they are only ever iTunes \ digital releases?

Now if the CDs have been printed, but never sold - is that still a release? There are clear photos of these in existence.

And I bet in the last few days he has sold a few copies on iTunes. And if he is clever he could now make big out of this if he owns up to what has happened. He has gained fame - but maybe not in the way he initially aimed.

The music does exist. You can listen on YouTube. And he played something at those gigs. Look at the BBC article as they interviewed some of the tour locations and talked to the support bands. It looks like he has written music and clearly happy to perform in front of an empty room. As bizarre as that may seem to us.

There are also photos of a production run of CDs. Even if there are only a few dozen CDs ever printed - they have still be printed. It exists.

This sorry is funny and I feel little bit sad for that musician.
I will listen to the previews, if any.
What matters is his music.
I think we should not loose much more time on this except setting the start date to 2017 and maybe subscribe to the artist/label to prevent further fakery.