I have a small dilemma as to what to do with the artist relationships for the recordings on the “Gold” compilation by The Moody Blues. The CD liner notes list the various people involved with each track, but not their instruments or vocal parts; Wikipedia does list the breakdowns ( Gold (The Moody Blues album) - Wikipedia.
Because the album is a compilation, many of the recordings come from the various albums in their discography, and adding relationships will have them appear selectively on the individual releases which makes things ugly and inconsistent. Further, the Wikipedia page is too broad (e.g., all four members are unlikely to be vocalists on all the songs) and so inaccurate.

When you have credits that don’t break down for each recording, they should only be shown on a release level, not recording level relationships. I wouldn’t use Wikipedia as a sole source, but most of the time it does cite the sources for their information and that could be pointed to, i.e. the booklet, etc. I definitely wouldn’t apply any instrumental or vocal relationships from a compilation unless they show them on each track specifically.

Thanks for the response. Yeah, I agree with you: accuracy is very important. I was leaning this way, so your answer confirmed my thinking. =)

I don’t think this is a concern - I’d say this is pretty standard for MusicBrainz actually! If recordings are used properly I’d expect it.

Further, the Wikipedia page is too broad (e.g., all four members are unlikely to be vocalists on all the songs) and so inaccurate.

Hmm, Wikipedia only lists all four as vocalists on some of the songs, which makes me think there must be some logic to it. I don’t know enough about the Moody Blues, but do they ever sing harmonies etc? Can you find any credits in the original album release booklets?

Anyway, I would lean towards you being able to add these to the recordings, unless you find that WIkipedia really has derped it up here.

edit: only had time for a quick look but it does look like all are credited for vocals sometimes: 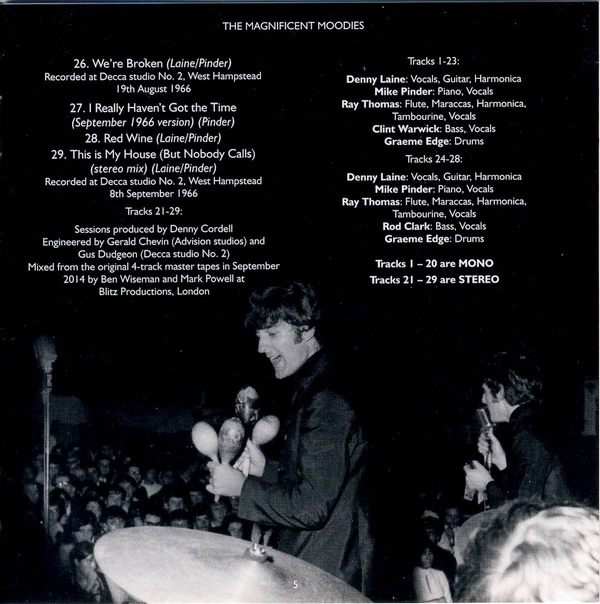 Unfortunately, the CD liner notes only list the names of the performers, not the parts they play. That said, for most of the parts, I could go down the rabbit holes for each song since I can mostly find the credits from each album from which the songs were taken. The Wikipedia listing is pretty good, with just one stray credit on a song.

I do a lot of editing for classical music which usually has excellent breakdowns, so when I come across these cases, it makes me squirrelly.

Just saw your edit. Justin Hayward and John Lodge alternate lead vocals on songs, with Ray Thomas doing the odd one. Thus, to list them all as vocalists makes the information accurate at the release level, but not at the individual recording level.

In the end, I decided to be conservative since I don’t want to enter incorrect or misleading information. I listed all the names as “Performer” at the release level. Not ideal in my mind, but I don’t want to create a mess.

Sometimes a “by ear” listen can untangle some instruments and vocalists, but it can be tricky.

I have one band I edit where one guy plays Bass, one plays Drums, another is usually on lead vocals or maybe guitar - but not always clear so he ends up as a Performer as the fourth guy may be singing or playing a guitar.

I have been known to watch live videos with pen in hand taking note who is singing, and who is playing which type of guitar or mandolin…