Can’t think of a concise way to word this for the sake of a post title, but anyway, I am talking about the following four releases:

As you can see if you click through, the artist name for these releases is some various form of a list of the individual musicians involved, for example “Jusell, Prymek, Sage, Shiroishi”. This is, I believe, how they were initially released. However, in the time since releasing these albums they have named their band that of their first album, Fuubutsushi. All of the Bandcamp pages for their respective albums are now attributed to the artist name “Fuubutsushi” (example), as is an anthology release of the four albums. Additionally, liner notes within the physical release has band members referring to themselves by the name Fuubutsushi.

So: it’s pretty clear that the artist Fuubutsushi deserves to be added to the database, but is a changing of the artist name in order? Things start getting into a weird grey area when things like this happen with digital releases, because while they were once available before the band name became official, they no longer are. Not sure the right way to go about it all, so I’m looking for some advice! Sorry if I’m wording things badly, I am extremely tired. Thanks!

here’s another similar example, in this case a name change by the label:

What is "Withdrawn": a discussion thread + examples Style

a few points i’d like to talk about some releases are more withdrawn than others, right? as an example, a release that was withdrawn due to licensing issues like the ticket mentioned i…

I do not have an exact date for when the change was made, so how would you recommend I approach that? Using the Wayback Machine I can narrow the change down to sometime probably mid-2021 or so, but I’m not sure how I could get any more precise than that. Such is the way of digital releases, very hard to get reliable information on these things when they change.

edit: meant to post this as a reply but messed up and couldn’t delete and repost. Whoops.

if it can’t be found, then I’d just set the release date to 2021. however, it might be possible, as Bandcamp embeds the date the page was last modified in the page source. I’ve got a userscript that displays it, and it currently shows a last modified date of October 15th, 2021 for all 4 albums you mentioned. if this lines up with what you found on the Wayback Machine, you can use that date. 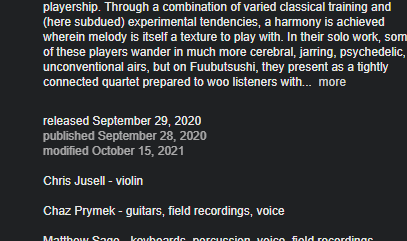 without the script, you can view the page source and search the page for dateModified. that should pull it up.

if you’re interested, you can find the userscript here. it’s quite handy in conjunction with the Wayback Machine, as it also works on archived versions of the page.

oh thank you, that is super helpful to know!