How do I move a release (not added by me) to my release group?

I want to correct an error in the entries for Kokomo (Kokomo - MusicBrainz).

Merge them and then wait:

You need to go to the page of the release you want to move between release groups, then go to “Edit” tab. Then click on the magnifying glass icon in the “Release group” text field. This will pull down a menu where you can search and select release group to move to.

A picture is worth a thousand words: 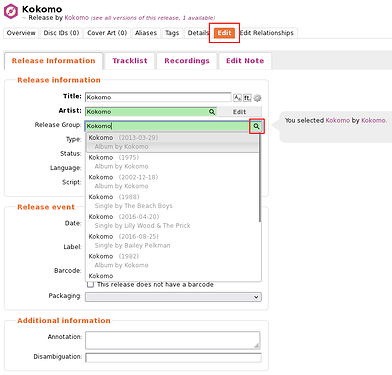 As a side note. I’m not familiar with this Kokomo band, but is seems strange that there should be so many release groups with the same name. Is there a reason to keep these release groups separate?

MetaBrainz wants Discourse not to quote preceding posts, so not my fault if people can’t figure out which advice I’m referring to.