(I’ve just read the newly started thread about “Alternate CD matrix/runout inscriptions: enough for a new release?” but decided to start a new one for my current problem…)

If a DVD-V is included, there’s always a BBFC (UK) or FSK (DE/AT) certification (or something that-like in other countries). Is this relevant for the release country categorization?

I’ve got all of these. One release I have edited recently (Synthesis) is set to release country Germany. That’s how it is on Discogs and I didn’t question it until I’ve seen the BBFC certification logo printed on the front cover (on Discogs too, see more images). It matches my release 100% (…sent to me from the UK). So is Discogs wrong?
On the disc are two certification logos printed: BBFC and FSK. Is it a German + UK release? Or UK only? (because of front and back)

If attached to the packaged product, it’s probably not a separate release (is it?), but what if the sticker is directly attached to the cover (prior to packaging)?
And/or, what if it’s printed on the DVD itself?

Or should I forget about these certification? (… as another local sticker could be attached to the packaging anyway)

On the disc are two certification logos printed: BBFC and FSK.

That’s a common case: The discs are identical and shared by multiple releases, because they were manufactured for multiple countries. If the rest of the packaging is different, create a new release.

I’ve already created this release. Only it’s set to Germany, acording to the matching Discogs release.

And my current problem is a matching European MB release and on my album cover and DVD medium is printed “FSK” only. So probably only for sale in Germany (and Austria of course).

… I don’t want to add the images by now, but it’s already on Discogs (more images).

I’ve added a new release for this one, made it a German release:

It can be merged if necessary. Vice versa it would be difficult to separate without canceling the image uploads.

It’s a “second case” example - sticker attached directly to the cover. Is it a separate release, if the same discs were packed into different covers?

It’s a “second case” example - sticker attached directly to the cover. Is it a separate release, if the same discs were packed into different covers?

IMO this is an edge case: If you remove the FSK sticker of your German MB entry you have exactly the European release as on Discogs – or did I misunderstand you? Independent of the release country, the (much smaller) BBFC certification is always printed on the back cover – maybe because it is not as annoying to the German consumer as the big FSK logo would be for the British buyer

Personally I would say an FSK sticker that was attached to the finished product is similar to a price tag and can be ignored (IMO for both cases 1&2), but it is your decision whether you consider these releases different enough.

maybe because it is not as annoying to the German consumer

It is annoying! At least to me it is.

The sticker is not going off easily and I tried not to hard in fear of damaging the cover.

I agree on this. A sticker should not make a different release, even if it’s directly attached to the cover.

Although there are cases, where a sticker makes definitely another release. The latest La Roux album had a special signed release with a sticker, giving this release another barcode.

I have the same release, maybe the same edition: https://musicbrainz.org/release/f824ce28-5819-4121-be35-abaf6ffdbbd4 bought in France.
But I don’t remember why I uploaded a cover with an FSK sticker while mine, according to what I said, had none (honestly I don’t remember now as this album did not stun me).
I want to inspect your scans to see if we couldn’t merge our releases.

I doubt it. This release has no bonus DVD, so there will be no certification logo. The images should better be replaced. They belong to the deluxe edition.

But it’s interesting. On this front image a FSK sticker is attached in addition.

I do have a bonus DVD but I did not have time nor enough motivation to add to MB, yet.

Yes, then it should be merged, but before that your release has to be completed as there’s probably no chance to clone only one medium. Luckily there are only 34 tracks. Is it possible to merge if the titles are different?

there’s probably no chance to clone only one medium

The BBFC logo seems to appear on a lot of packages, no matter where they came from. Here is a confusing example from my own collection: https://musicbrainz.org/release/0f9da849-2a36-4011-8cb4-b02a2c2cd0a2

My copy of The Jimi Hendrix Experience - Are You Experienced is a European Market edition bought new from Amazon UK. Manufactured in Argentina (disks and packaging). With a UK BBFC logo on the rear. Zoom in on the small print at the bottom and you see Spanish language text detailing the Argentine distributor. 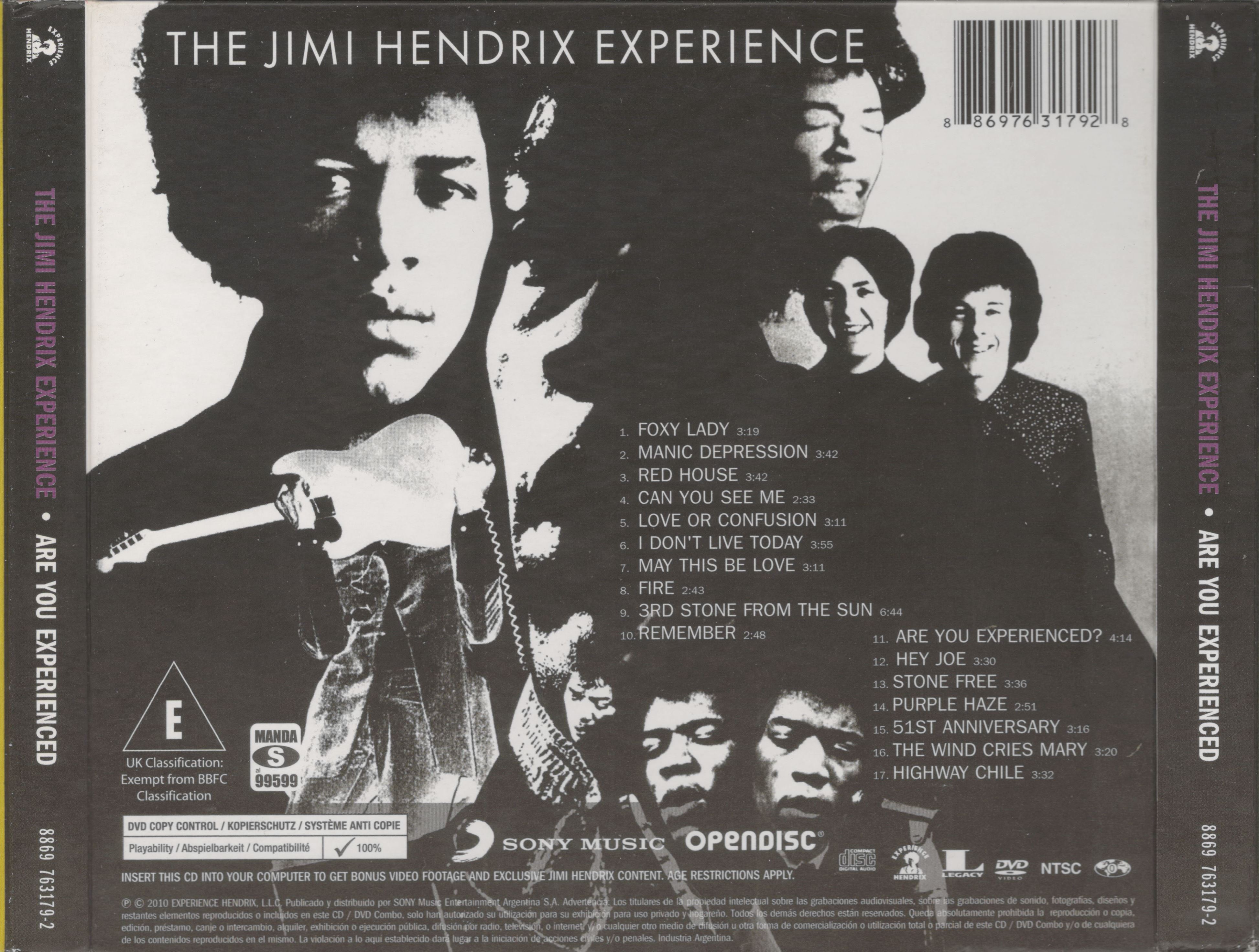 I was advised to add this as an Argentine release due to that small print.

The BBFC logo seems to appear on a lot of packages, no matter where they came from.

Yes, it seems there is no big hint from that.

It says in the small print that it was published and distributed by Sony Music Entertainment Argentina. This is a good indication that the release was issued in Argentina.

What @Kid_Devine said. It is that “distributed by” part. In this case it is caused by Amazon being a global company. They probably decided that excess stock in their Argentine warehouse should be moved to Europe. And then it was sent to me from there.

The key is those words on the back and where it was originally released to. The fact that Amazon pick these up and send them worldwide is secondary.

I assume they can get away with this due to Sony not bothering to translate the booklets.