Hello! I’m posting this topic in an attempt to bring attention the MusicBrainz’s metadata limitations and hopefully create a space to unify people’s ideas about what should be added.

Most importantly, I think that all roles should provide users with the ability to further specify the task within that role. This feature, which is already present within the producer role, would benefit the site by cutting down on the need for sub-optimal credits, which I find myself having to use quite often, especially when it comes to photography. It would also better account for any major changes in technology use in the future, such as the increasing popularity Pro-Tools engineering during the pandemic.

Here’s a photo of the producer field in case you don’t know what I’m talking about. Note the ability to specify a task within the producer role. This is what I think should be expanded to all roles. 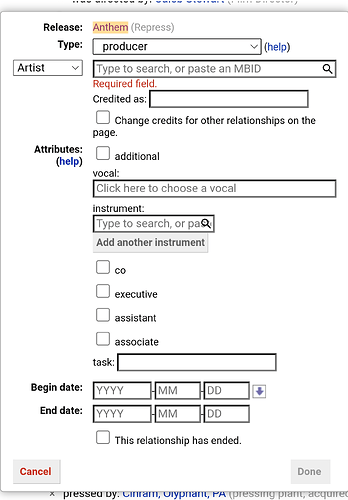 Next on the list is video roles. Because music videos are so popular in the music industry, I think an expansion of video roles is in order. Some important roles include the screenwriter, filmer, cinematographer, director of photography, production designer, costume designer, and production company.

Finally, I think the are some more minor tweaks that would be helpful. Just small role additions, such as:

Any additional comments or contributions welcome

Are you aware of the tickets?

You can request tweaks and additional roles, etc. there. Search for these there as many of these may already be in the pipeline or denied with a reason why.

Yes, I’m aware, thanks. The post here was more meant to bring wider attention to the problem as well as allowing people suggest roles that I may not have thought of. Furthermore, this would likely be a larger project that may not fit the scope of ticket suggestions.

I’m also interested in music videos but sometimes I can’t add many of the credits and have to stuff them into the annotation. E.g.

• RYM now supports music videos! These can be added using the new “music video” release type. Please read site documentation (Release types) to know what qualifies as a music video before adding one to the site, and join the Site Policy board if you’d like to shape the direction of this feature going forward. You can include music videos in new music/upcoming if you wish via account settings-> new music updates.

• Music video charts will be available sometime in the next few weeks, once the feature has accumulated enough ratings.