I’m adding a historic release that includes take numbers on its back cover, formatted as:
“It’s a Lonesome Old Town -2”
“Honeysuckle Rose -1”

My first impulse was to remove this from the track titles; they’re not part of the title, and in the liner notes only the title itself appears. However, there are multiple takes of the same title, so removing them entirely would be confusing.

Per ETI style, these should go in parentheses:

That’s a bit ambiguous as to what that number means, so I think it’d be more sensible to take it one step further. This is a format used on some actual releases:

Anyone have thoughts on this? Again, it’s a reissue of 1920s material, so artist intent doesn’t apply.

The brackets style is clearer. It is more like a remix \ alternate version of something. Not a “part”. And the dash does look a bit vague but is what appears on covers.

I’ll watch this conversation and tweak that if needed. Especially the recording level.

I certainly agree that this is vital data. Just like the (mix) details on remixes. Otherwise someone comes along later and merges them in error. I wouldn’t be surprised if a second and third take can generate a very similar AcoustID and length.

When making a style decision like this, I consider what this looks on the artist’s recording page ( https://musicbrainz.org/artist/16f74a5b-bb94-4025-93e4-ca56ece9f947/recordings ) and the ability to spot the different recordings on that page.

This as it’s a version information.

When making a style decision like this, I consider what this looks on the artist’s recording page ( https://musicbrainz.org/artist/16f74a5b-bb94-4025-93e4-ca56ece9f947/recordings ) and the ability to spot the different recordings on that page.

For the recording itself, I would rely more on the disambiguation comment as you can fit more detail in there than you’d want to see in a title (see here for some examples). With this type of recordings, they have almost always been on multiple releases, with different detail on the cover - take numbers, “alternate take”, or no distinguishing information at all.

So that brings up a followup question. Suppose this release didn’t include the take numbers on the cover at all. From the liner notes I can identify which takes are which. Would it still be okay to label the tracklist with “(take 1)” and “(take 2)”? Now we’ve moved from standardizing format to adding information.

Suppose this release didn’t include the take numbers on the cover at all. […] Would it still be okay to label the tracklist with “(take 1)” and “(take 2)”?

I’d say the track list should be as close to as‐written as possible, but name the recording with the " (take N)" (and maybe even also add it to disambiguation). If the track list doesn’t mention this, then it’s likely not that important for that specific release/track list, so IMHO shouldn’t be included.

@Freso in this example the cover is clearly showing -1, -2, -3 so it is showing that the take numbers are important. Seems to make sense to take that to the more compliant level of (take 1) instead as the text looks weird otherwise. That slight tweak is like when we remove the ALL CAPS that those covers are written in.

Or that is how I have understood this question.

I really prefer the second example with (take 2). I think it adds clarity.

I really prefer the second example with (take 2). I think it adds clarity.

If I had seen that back image without having read this thread, I wouldn’t have the slightest idea “-2” means take 2. It seems like a pretty rare notation to me.

@IvanDobsky, @Freso was responding to my hypothetical followup question, not the original one.

I think he’s correct that alternate takes are usually indicated in the tracklist somehow, when they are important (in particular, if there are multiple takes of the same title). I’m pretty sure I’ve seen exceptions to that, but none come to mind.

However, there does seem to be general support for the idea of standardizing the format of take numbers when they are present.

I am new to this, and wondering how and where to even add something like ‘alternative take’.

I guess it shouldn’t be in the title since it can depend on a compilation if it is considered the main take or an alternative take.

So I probably shouldn’t look at the recording level to add this?
(I couldn’t find something that seemed a candidate for this there anyway)

Where should I look?

While at it, the same question for ‘bonus’ tracks?

@Rai_ner post a link to the example you are asking about. It makes answering easier as we can use real examples. Even better if you can link an image of the rear cover.

The Recording should keep a clear name. Generally aiming at the most commonly used name for that recording. When there is an alternate take then that is kept as part of the title (alternative take). Though other info like a live recording date gets move into the disambiguration filed.

Now there is some text that never makes it to the Track Titles. And that is stuff like (bonus track).

Here is the guideline page for this that should help.

The Recording should keep a cleaner name. In those cases words like (alternative take) is added to the disambiguation field.

The guidelines you link to don’t say that though.

For recordings, follow the same guidelines [as for tracks], with the exception of live performance data.

The guidelines you link to don’t say that though.

Sorry. I’ll reword my reply. I’m never good around ETI as personally I want it all kept as part of the titles but I am regularly told I have it wrong again.

Is that better wording now?

Yep, that seems good. I’m not sure, but maybe @Rai_ner just wants the tracklist editor?

This is part of a print of the release I want to enter.
It’s considered a re-release of an original 1977 album, and they use the same album title for it.
(Chet Baker - You can’t go home again)

The original album has 4 tracks. This one has 20.
Some of the additional 16 tracks come from another ‘original’ release, and some were not previously released. 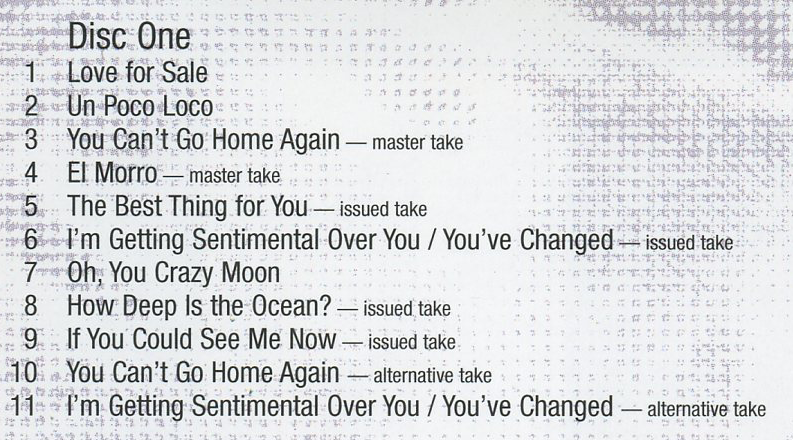 The first 4 tracks come from the original album with the same name released in 1977.

Tracks 10 and 11 could be considered ‘previously unreleased’

Looking at the link to the guidelines you provided, it seems to suggest that I should add ‘master take’, ‘issued take’ and ‘alternative take’ to the titles.
But somehow that feels wrong to me.

Can you confirm that I should add it to the titles themselves?
Wouldn’t it (undesirably) affect the titles on the other releases too?

Can you confirm that I should add it to the titles themselves?
Wouldn’t it (undesirably) affect the titles on the other releases too?

When asking for help on these forums please always link to the actual release that you’re working on, it makes it much easier to help you.

Huh? I think that’s my contribution that I entered just today?
I thought it took a week before a newly entered release/edit became available?

Well, life should be full of surprises, and MusicBrainz seems to have plenty of those.

On the recording, I feel strongly that this information belongs in disambiguation rather than ETI, along with other disambiguating data as needed/available like recording date and matrix number. My habits continue to evolve here, but I’ve started using a format similar to the live ETI format:

The track naming can reflect how the take is identified on the specific release, which tends to vary from release to release: “take 1”, “alternate take”, “alternate master”, or no indication at all.

On the recording, I feel strongly that this information belongs in disambiguation rather than ETI,

Ok, so I am now looking to add ‘master take’, ‘issued take’, ‘alternative take’ to something called ‘disambiguation’ for the tracks, and not adding those to the recording.

This is what I am looking at. (my own edit): 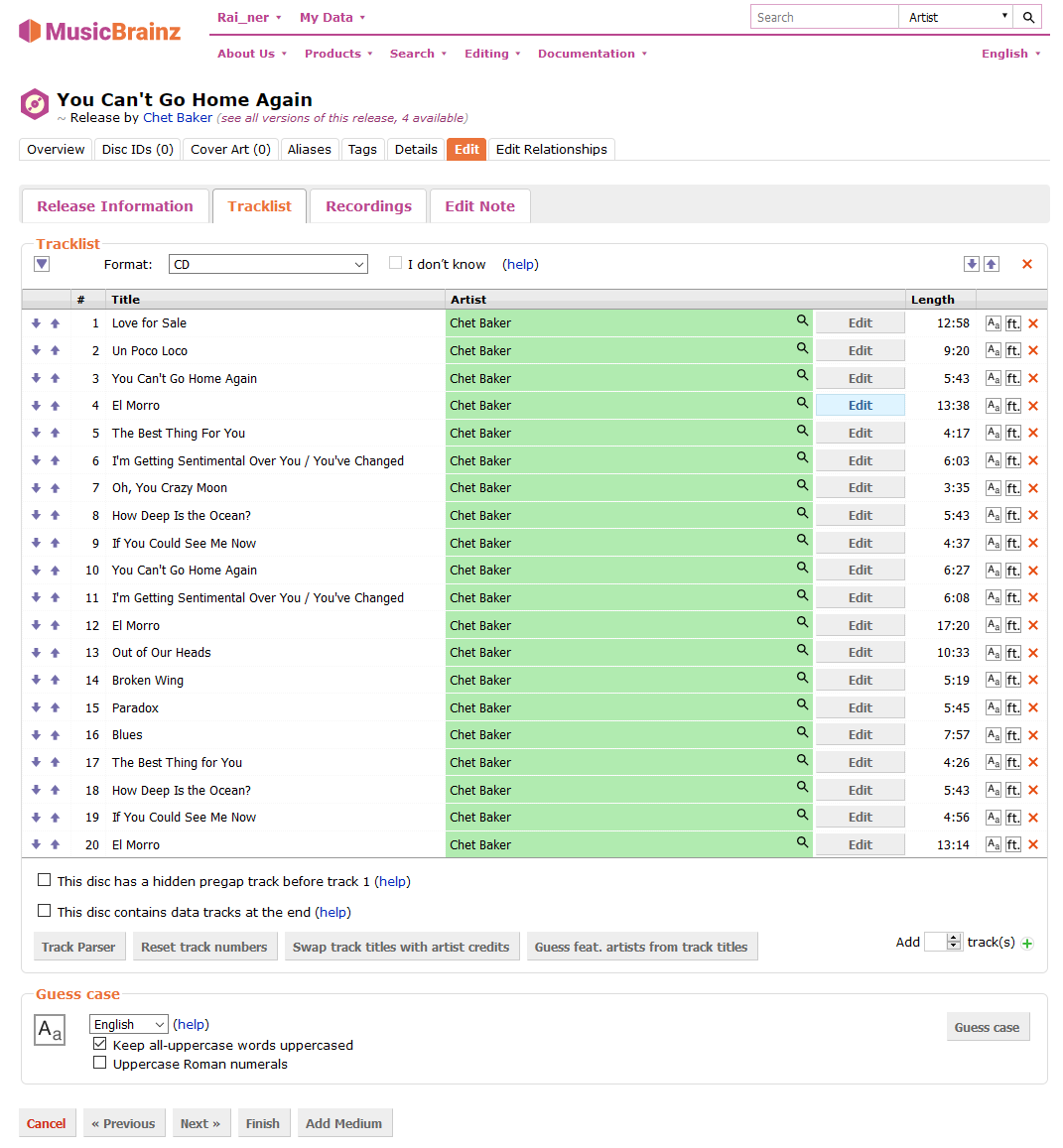 I would expect that I should use ‘Edit’ to add this disambiguation, but that button only seems to point to the artist, and not to the track.

I might be stupid or lazy (probably a little bit of both), but how do I get to this ‘track disambiguation’ from here?