Hello,
We had a discussion on the Release Group Redesign Ticket, which I thought can gather more opinions here. The feature is to display tracklists on the Release group.

If we display tracklists for every release on expanding, we see two problems here

For tracklist, I agree that what we should attempt at is not a “generic, combined” tracklist and come up with a smarter way to represent it. Taking tracks from the “base” release and marking out the ones which appear only on selected releases seems like a way to do it.

Would love your thoughts on this one. Attaching the mockup 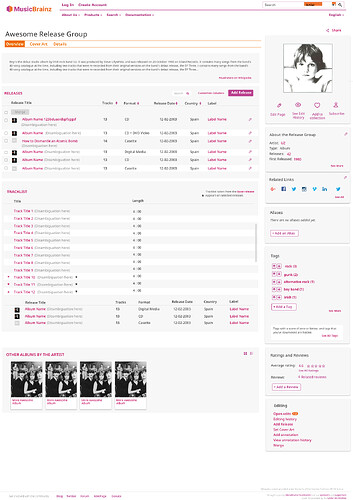 base release = the first release added to MB, from which other releases were duplicated? Am I right here?

base release = the first released release (by release date).

But I know some Japanese editions with bonus tracks that were released a few days before the local UK edition, with main tracks (canonical, original track list is there not the first ever released). Beyond that, we have individual release pages if someone wants the actual tracks. It is an extra step for users, but it also ends a lot of the confusion for users (and arguing amongst editors). WP has to display (collapsed) all of the releases on one page because that is how their system works - everything on one page. We have a different purpose, which is why all of our items are on separate pages - which is why taking the extra step of clicking on a release to get tracklists is acceptable.

Very cool! I use this feature a lot on discogs and do find it annoying having to click through a release group and then a release to see the tracks.

I would like it represented a bit more ‘seperate’ to the way the releases look in that mockup though, it’s starting to look like a lot of similar information on the page, which I think could be avoided. Again, discogs does this quite well I think.
I definitely don’t think we need to show more releases below the tracklist - what would be amazing would be if you rolled over a track or a release and it highlighted the releases or tracks that corresponded? Just a thought.
A related question - can we collapse these sections, and if we do, can mb remember this and collapse the tracklist in every rg we visit?

Maybe use the first release (by date) but also let us ‘set’ the base release like with rg cover art? If it can be done neatly.

Yeah, there will be cases where the first released release is not the “base release”, but this should still be the best way to do it and much better than using the first release entered into mb (I already mentioned this on the ticket).