First, a quick background: I entered two releases for something. They are mostly the same. The main difference is the media: one CD, and the other digital. There are other details, such as slightly different track lengths and audio formats, as well as other little things. But the most prominent ones, namely the title and the artist, are identical. In order to be able to distinguish these easily, I added disambiguation comments for the media.

Recently, however, someone removed those comments. When I asked why, they said the comments are redundant. I pointed out that without disambiguation, there are places where it’s difficult to tell these apart, for instance when entering a relationship or in search results. The other person blamed this on an interface shortcoming, and claimed that disambiguation is only appropriate “when all displayed data fields are same or similar enough to be confused”. Finally, I argued that the documentation only makes an issue of identical names. You can see the whole discussion in edit #62966473.

So, I want to ask, what is appropriate in a case like this? I know there have been similar discussions along these lines, but my main concern is to do with ease of editing. The below picture shows the popup with the two relevant releases. Can you tell just from this which is which? 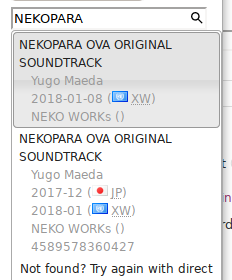 I can, but only because of the different release event details that I entered myself, and one has a barcode. To others, it probably won’t be so obvious.

Edit histories show even less information: just the title and artist. There may be other places where this is a problem, too, but these are the ones I’ve noticed.

IMO, disambigs are a simple solution for cases like this. Alternatively, as the other suggested, the interface could be enhanced to show media in such lists. What do you all think?

I don’t think we should use this kind of comment for things that already have their ad hoc field like medium type.

Disambiguation comment is necessary when we cannot see the difference from the release group page.

Otherwise we would have to comment all releases with redundant info.

So, then, are you saying the interface needs to be fixed?

I never really have this issue so I would not say that.
When I want to create a relationship to some specific entity, I always paste the said entity URL in the search field, so that it both switch to the entity type and immediately finds that entity.
I save huge time this way.

In some situations, that may save time. However, in others, I think it may be faster if you can type enough of the title, and select the right one from the drop-down (assuming this issue isn’t in the way). It exists for reasons, and that might be one of them. Of course, it depends on the individual editor’s habits, as well as the situation. In any case, the drop-down is not very useful if it doesn’t allow you to quickly see which is the correct choice. Whether it is the interface that should change or usage of disambiguation, I don’t know. But I would say it’s one of the two.

Also, the documentation I mentioned seems to say something different, as I mentioned in the edit comments. It consistently focuses only on the name/title being identical, and not any other part of the data (not even the artist, even though that’s usually shown too). It also says nothing about release group pages. I’ve been using it as a guide for this. Now, I’m being told (essentially) that I’m wrong. If true, that necessarily implies the documentation is wrong, or at least needs to be improved a bit.

Also, the interface for releases and only releases (for whatever reason) has a pop-up sidebar that states, “The comment field is used to help users distinguish between identically named releases.” No mention of any other aspect of releases (again, not even the artist), contrary to what some have said, and despite other aspects being visible on a release group page. So, is this out of date or what?

“The comment field is used to help users distinguish between identically named releases.”

That’s true in as much as the release Names are concerned. The first step in searching out a release is simply submitting just the release name. Everything else is secondary as you drill down to find an exact match. Sure the experienced editor can possibly script a means to go directly to an album or song they explicitly want. But what would happen when there are 6 more “Digital” releases with the same “Digital” disambiguation? You’re back to drilling down.

I would agree with @chaban & @jesus2099. It is redundant as a disambiguation, imho.

But what would happen when there are 6 more “Digital” releases with the same “Digital” disambiguation? You’re back to drilling down.

Fix it by adding just a little more distinguishing info? It’s not like there’s a rule it must say that exact thing. It’s free-form for good reason. Sure, at some point, it ceases to be worth it, but IMO it isn’t before this point.

So, does anyone want to weigh in on the interface angle? And the possible documentation problem?

(The only caution I have is that it does take time (far too long) to learn to recognize what infoirmation that disambiguates is already on many MB pages.)

I edit in places that are un-workable without disambiguations.
If it is the communities wish that editing be made impossible or overly painful in such circumstances then let’s make that explicit in the Guidelines.

Release names appear in may search results.
From a Recording page edit to add a Relationship between that Recording and a Release.
A drop down list of Releases appears.
If the displayed results do not adequately automatically distinguish between the CD and Digital Release versions then a Disambiguation is highly valuable.

The good thing is that all those in-line searches are the same, so we could ask for adding the format as CD+DVD, Digi., Cassette, etc. and it would be fixed in all places.
We could give it a try.

We could add another grey round bracketed text after the comment: 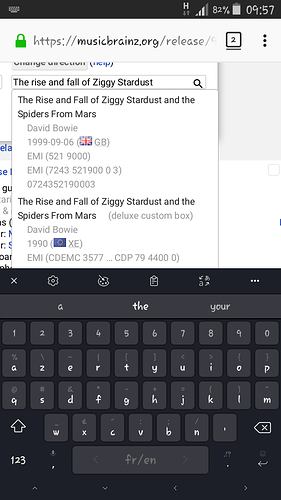 Yes, that could work. May not always completely solve the problem, as that example suggests, but I think at least showing the format can help for cases like mine.

So, should I go file a ticket, then? I don’t think anyone else has, but I want to check to be sure.

@fllthdcrb did you file a ticket? I’ve found an old one:

Displaying disambiguation comments is good ticket.
And also, we should display useful attributes, like explained there for artists but it’s a need for all entity types (already covered for works).

I’ve been putting this off for no really good reason. But now that old ticket has been brought to my attention, I’m not sure whether I should file a new ticket anyway, or necro the old one. What happened there, anyway? It looks like they agreed to look into it, and then… just didn’t.

There are thousands of open tickets so keep using this one rather than new ticket and also that explains why particular tickets are not treated, because there are so many.