OK, I did some research and I have to say that it’s a bit of a nightmare. It’s about the different releases in the following release group:

Journey to the Centre of the Eye

This album is a single piece of music, cut in two for vinyl releases. There’s a division into parts mentioned on the labels and back cover, with track durations. For the first CD release (Bellaphon, late 1980s), they applied track indices according to those track durations on the LP.

But all remsatered re-issues, starting with the 2004 Eclectic release, have the track indices at different places for the last 5 parts. (Although the artwork of the LP with old track durations is used on two re-issues that contain the new track durations, so even more confusing.) And not just a bit. I made the following image with a timeline for the second part of the album. Left is the LP and early CD, right is the 2004 and later reissues. 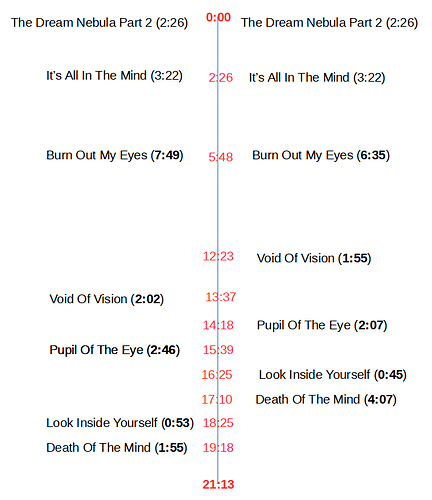 The thought crossed my mind of making Journey (the whole suite) as a single work and all recordings part of it. But it’s also about the links from releases to recordings.

How should I get this one into the database properly? Thoughts, ideas?

If the band only played the whole parts I would add only part 1 and part 2 as recordings and works!

When listening to the different versions and reading the sheet music book (from 1971), it’s my opinion that the original LP (and first CD reissue) tracking has the correct lengths, everything starting with the 2004 re-issue is incorrect. All later reissues followed the 2004 tracking (they used the exact same mixes, so for anything 2004+, there will be one MB recording).

These are clearly different recordings on different releases. But they can be connected with a common Work.

I have seen many cases where the initial CD pressings of a Vinyl release get the track names very wrong. The CD is being cut up and divided by someone who does not know the works involved.

These are clearly different recordings on different releases. But they can be connected with a common Work.

Good to hear but can you give an example? Take that Look Inside Yourself. Starting with the oldest release of the album, it now has a recording and a work, all with the same title.

I would love to be able to simply connect the titles and make a note the track indices are wrong - which is the case, in my opinion. I’d be happy to adjust the track durations on all the releases that have the wrong indices. But is that the way to go on MB?

I’d be happy to adjust the track durations on all the releases that have the wrong indices. But is that the way to go on MB?

Track durations for CDs should not be adjusted, because they are defined by the CD and its DiscID. (For vinyl releases it would be worth a thought to change them and put the wrong old durations into the release annotation instead.)

There is the possibility to assign multiple works to a recording with a partial recording of attribute, which is the best solution for cases like this IMO. Below is an example I created in the relationship editor with the help of your beautiful timeline

Unfortunately you can’t order these work relationships in the release relationship editor, to achieve this you have to switch to editing the recordings directly:

P.S. It would be nice if it were possible to add your timeline into the annotation of the RG, but AFAIK images can’t be embedded there

Track durations for CDs should not be adjusted, because they are defined by the CD and its DiscID. (For vinyl releases it would be worth a thought to change them and put the wrong old durations into the release annotation instead.)

That’s a pity. So all artist intent can be destroyed by someone placing an index wrong. One mistake that has nothing to do with the music changes everything. And for vinyl we can change what we like but only because of the disc ID we cannot do the same for CDs. Maybe MB should get something so we can deal with that?

I will not change the vinyl indices since they are the most correct ones. The first CD issue also has the correct indices.

I can try and make the timeline in text. But if annotations don’t take any formatting either (Markdown would be nice) it will never look good or clear.

Maybe MB should get something so we can deal with that?

This is a tricky one no doubt but looks like you’re doing a great job!!

Oh I didn’t suggest we’re doing it wrong here. I was looking at it from a developer’s point of view (I am a software developer) and there’s this common dilemma of having to chose between several ways of doing something: staying close to the disc IDs means losing some of the the artist intent in some weird cases like this one. The tools are there, it just feels like a lot for a simple mistake that has got nothing to do with the performance and recording.

But I think I understand how to solve this now.

This is a tricky one no doubt but looks like you’re doing a great job!!

Hi, I just wanted to provide you an example of how fellow MB editors already dealt with wrong CD indices (although this example is easier):

The Wall (made in Japan, printed in Holland) 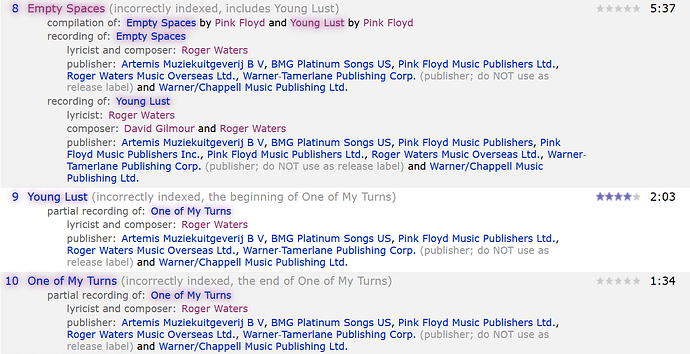 I took a screenshot of the tracklist, because without userscript magic you can’t see these grey recording disambiguations inside the tracklist (normally they are only visible on recording pages). These disambiguations help other users to understand why e.g. track 9 is linked to the work One of My Turns although it is titled Young Lust. I would strongly recommend that you make use of them too.

@kellnerd that is the exact example I was thinking of earlier. I just didn’t have the time to do as good a job as you have of explaining.

It is the manufacturer who chooses how to cut these things up. Especially a reissue on a different medium. And the Japanese manufacture of that Wall CD clearly misunderstood what was on the audio of the vinyl.

It is not “artist intent” - this is just manufacturing errors. Decades later they then get corrected.

This will be the same with @jerry1970’s example. Some lazy manufacturing company made a mistake. And MB is a great place to document that stuff.

Make full use of the disambiguation and annotations to make this clear. Make it obvious at the differences. When you have extra knowledge of an artist like you clearly have it is good to get this into the database.

Thanks @kellnerd and @IvanDobsky for the clear examples and explanation. I know how to go forward now. I will wait a while till all open edits are processed and then continue.