Conclusion of multiple digital media releases for 16 vs. 24-bit?

So, I read through Digital releases and also some older threads and… am unclear what the consensus is, if any. Or at least, what the decision is.

Personally, I don’t see the point of adding multiple digital releases, especially multiple lossless ones. OTOH, if I add another release, I could fix the track name typos w/o having to wait for the edit to apply… but that’s not exactly good for the project as that’d leave the audiophile magic pixie dust version with silly typos.

So, it’d be nice to have a style guideline of when there should be separate digital releases entered.

IMHO the one change should be “16bit 44.1khz and 24bit 48khz FLAC Audiophile Downloads available”

That way it notes the slight difference between the two.

And comedy typos in that entry. Never seen someone use both sets of quotes in one go - 'Winter Daydreams"

IMHO the one change should be “16bit 44.1khz and 24bit 48khz FLAC Audiophile Downloads available”

I meant as an annotation purely because that is where the previous editor had added their note. Makes it clear it isn’t just some low quality MP3. 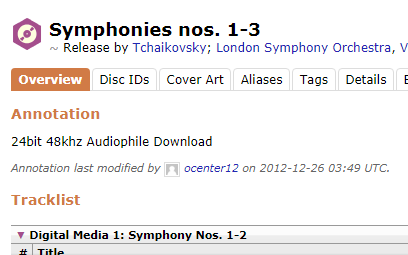 I’m fine with it as an annotation, sorry about that. I had quickly pulled back up the edit page when writing that — and, well, the two fields are right next to each other. Read it too quickly. Oops! (I’m more careful when actually editing, I hope.)

As an aside, please still no merging of releases where someone else has gone to the trouble of making separate ones and making the differences clear.

If a website offers the same music in different formats or with different quality settings, that’s almost definitely only one release.

How we want to improve the display of the file differences isn’t clear. Here’s some food for thought about file formats:

I realize formats are theoretically per medium, not per release

When seemingly the same music is released in different stores, it comes down to where we draw the line between different releases and that discussion is not in a guideline ready state yet even though strong preferences exist. At some point, MB may develop something like release variants or other digital release specific stuff. Real guidelines are easier to make when the model is clear(er).

I would nowadays probably create a new release if I wanted to add a relationship to a digital album from one store but the relationship doesn’t apply to the albums from other stores. Such relationships tend to be barcodes and sometimes catalog numbers. I probably wouldn’t separate a release only because it has different copyright holders on one store although in those cases the barcode is often different too.

About this thread’s case: I think only one digital release is appropriate, as has been done here.