Al Jourgensen and Paul Barker are credited as Hypo Luxa and Hermes Pan in engineering roles.

I want to move the “producer” relationships from release level to the recordings on this release: https://musicbrainz.org/release/b5fac77c-ddc5-3fa1-9765-42d78f1cc9a3. In the relationship editor I added Al Jourgensen (credited as Hypo Luxa) and Paul Barker (as Hermes Pan) for each of the recordings. But is seems that these aliases are ignored on the release page:

OTOH in the relationship editor they are displayed with the aliases I set: 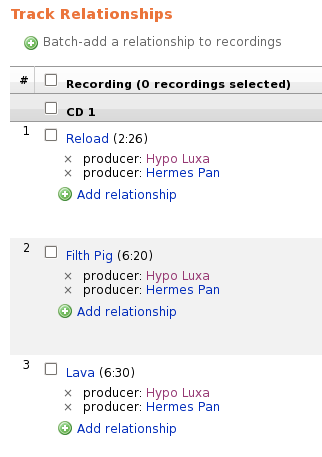 Did I do something wrong, or is this a bug?