I’m a bit confused and the Style guideline does not explicitly mention this (unless I missed it).

Which should be the best representation of a track title? And also, how does this apply in general?

If one of the tracklists (here the booklet’s) gives some interesting additional stuff, why not having them…
These are soundtrack references…
Sometimes the booklet tracklist add track artist credit information that is lacking on the back cover’s…
Your edit (removing booklet tracklist details) is not wrong, but I maybe would have kept them.
I’m not being very helpful. 🤦

Those production subtitles(?) were added not too long ago by @Misty_Pond

Yea, I noticed that @chaban . Just wanted to get some clarification on the namings. It is a tad confusing as places like Discogs and VGMdb (which are ones we use for linking releases) all listed names without production subtitles.

Unless I’m thinking of this the wrong way?

The style guidelines for classical music address this. I think it would be reasonable to apply it here as well.
https://musicbrainz.org/doc/Style/Classical/Track_Title

If it is chosen to not keep it in the track title, it can still be kept in the recording disambiguation comment or annotation.

They have different guidelines and should not be blindly followed.

If these are different versions of a recording, then the ETI is important - no matter if it comes from the booklet or rear cover. If it describes a difference in the Recording to another version it is important to include. Problem is in the example edit I don’t understand what the numbers mean so cannot comment.

They are the reference cue numbers in the soundtrack.
Music for soundtrack don’t always have title but always have this M-X, used internally to reference musics during TV series production.
But in public albums, we usually titles.
If I understood correctly.

I don’t have many TV series OST, I have set M-X in comments for tracks in the same case as this topic: discs 1 and 2.
The disc 3 contains almost only M-X, in the track and recording title, this time, as they are really only name that way.

There was a good edit note discussion that I should read again in that release: Edit #21877194 - MusicBrainz

I’m the editor who added the production codes – for lack of a better term – to the track titles from the album booklets. If you don’t know, there is also a compilation album, “Neon Genesis Evangelion S² Works”, which labels each track with their production code only, not the track titles (probably because the album also compiles a large amount of unused tracks that never received a “proper” title).

My reasoning for adding the codes to the track titles was that, since each code identifies an individual track, it could be used to help differentiate otherwise identical pieces of music, and – for people like me who are interested in that kind of thing – quickly reveal which pieces are “connected” to each other (e.g. rearranged or edited).

I’m fine with removing the codes from the release track titles if the majority declares so; admittedly, they do clutter the track titles up. I guess they are more trivia than anything. Keeping them in the recording titles seems like a good compromise, since that would help with identifying other versions of music – I know later Evangelion albums seem to often forgo the titles in favor of the production codes, probably because it’s just more convenient to write out

Yup, I do know of the S2 Works release (

Totally get your reasoning for the track title changes. After reading the discussion notes posted by @jesus2099 , I understand where he’s coming from and the edit he’s suggesting. It is a good compromise to add it as a recording note and I think we can reference back the recordings with future releases as well.

Understood what you’ve mentioned on the latter releases - especially the ones for the Rebuild movies, where production codes are added as titles as they were described in the back of the release album.

Let’s wait for consensus from the majority here. But glad to hear all of your inputs and I’m continuing to learn editing around here (still a tad beginner). 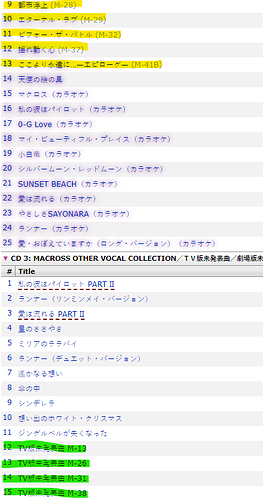 As long as MusicBrainz does not display recording comments in line (yellow), keeping this data in track title (green), is not bad, I think.