I have to add a release in the release group Notre-Dame de Paris
This release is similar to Notre-Dame de Paris: Intégrale : same disc Id (thus same recordings) for the two discs, but the catalog number is not the same.
I am wondering if there is a special thing to do when adding this release as the disc Ids are the same, and perhaps avoid duplicates recordings (or other data, the database model is a litle bit complicated for me) ?

Thank you for your response

This is very common. The same discs will be pressed for many years. And MB guidelines wants you to link up and share the recordings here as they will be the same recordings. You just make a new release with new cat nos \ barcodes \ etc and attach your discID.

When you get to the recordings page use the Edit button to find the original tracks from the search. Just watch out to match the same release.

So you did a CD Lookup with MusicBrainz Picard Tagger, for example?

Then you see a list of CD, but not yours.

Then you will see the same list of releases, but now on the MusicBrainz web site. 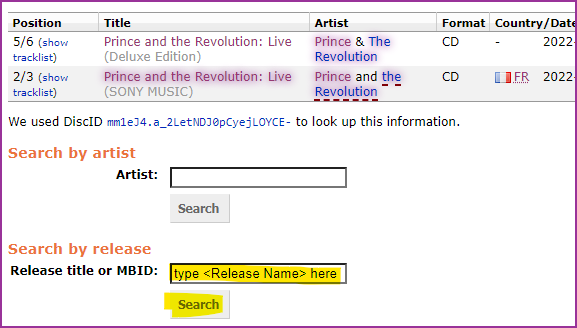 You should search your release. 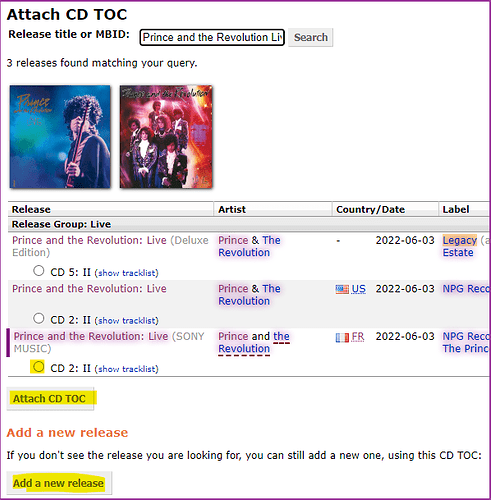 @jesus2099: thank you for the detailed process, I do like this to add new release. My questionning comes next.

@IvanDobsky: thank you too for your answer ! Following the previous steps, in the Add Release page, in the Release Duplicates tab (it get enable when sufficient information is filled), I have too choices:

select the similar release (same disc ID, so same tracks and recording): in this case, the Tracklist tab is already filled with track title and artist, and the Recording tab already has all recordings defined. Should I change something as I supposed all information is taken from the similar release I choose ?

This is the one. Assuming you have an identical track list, then you can just copy the other CD.

This then reuses the same recordings. In MB language these are the exact same recordings, just the packaging has changed. And you note those changes in the cat no \ barcode \ annotation on the first page of the release.

If you are re-using an existing release tracklist, your disc ID track times won’t be set, so don’t forget then to go to your new release Disc ID tab and click Set track durations link, next to your disc ID.

Thank you for responses. That’s what I have done