I am pleasantly surprised by some of the Australian towns and cities that are included in the Places list. Frankly, I was shocked when I found Blayney, NSW on the list. It has a population of just 3,300.

However, I was dismayed to find Geraldton, WA (population 37,648) and Toowoomba, Qld (population 169,010) aren’t included. They are both considered major cities by Australian standards.

I don’t how that list is compiled but it would be good to make worthy additions. 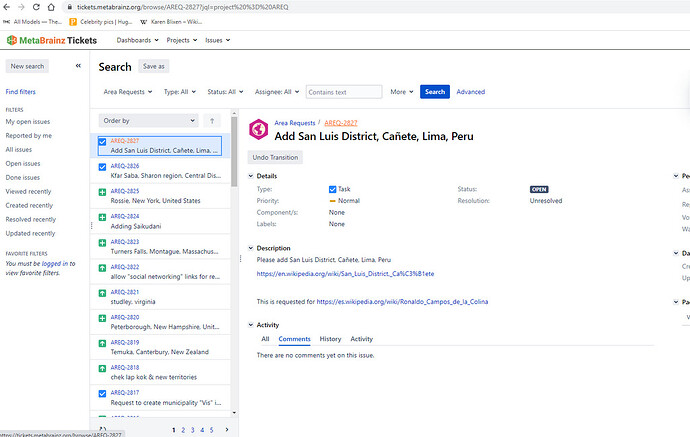 Then ask for the missing area, but I think you can’t just wish for a city you like to add. You usually add “This is requested for” + artist

Thanks for that and I thought you were writing some rude comment about Australia.

How did you know?
My first try included some nice reasons and comparisons, but the sentence turned out to be too complicated for my knowledge of your language. So I had to shorten it.

The good news is your instructions worked, I just created my first Area Request

Some of us have long memories

Place of birth / death - countries that no longer exist or renamed

Place of birth / death - countries that no longer exist or renamed

You aren’t really surprised, I suppose

I received a message several days ago telling me that my two requests for Places had been completed. I have tried several times since then to add the cities to the relevant author pages, however they are still not showing in the Place list.

Is there a delay between the addition of new places and there availability on BB?

The two places were Geraldton, Western Australia and Toowoomba, Queensland.

Is there a delay between the addition of new places

Since at least one of the apprentices of the area request officer in chief has to verify the existence of the requested areas personally, it will take a while in your special case for sure.

I tried it a few times and there was no delay at all, I hope that helps

Do you mean you tried adding those places to an author page and they were available? I just tried and I still can’t get a match.

Do you mean you tried adding those places

Sorry, not precise enough. I MADE some area requests myself and after getting the message there has been NO delay at all.

Is there a delay between the addition of new places and there availability on BB?

Very much so. Currently I have to copy the areas from one database to the other, which is less than ideal.
I will put it on my list to refresh with the newest changes.

Currently I have to copy the areas from one database to the other, which is less than ideal.

Thanks. I thought that might be the case. There is no hurry, I was simply unaware of how the system worked.