The tracks and times are a little off compared to this https://musicbrainz.org/release/c73530a0-c7ff-49c2-9e3a-affbf72f77ae and I can’t find any other versions anywhere. I don’t have the original, this was downloaded. It’s obviously the same, but Young Person’s Guide to the Orchestra Intro ~ Siberian Khatru is split in 2, In The Presence Of us only 1 track, Magnification ~ Don’t Kill the Whale is split in 2, and Awaken is only 1 track. I’m kind of bewildered here, but since I don’t have any data on this version I can’t very well add it to the DB. Or can I?

I did what we in Norway call “doing a Spanish one”. 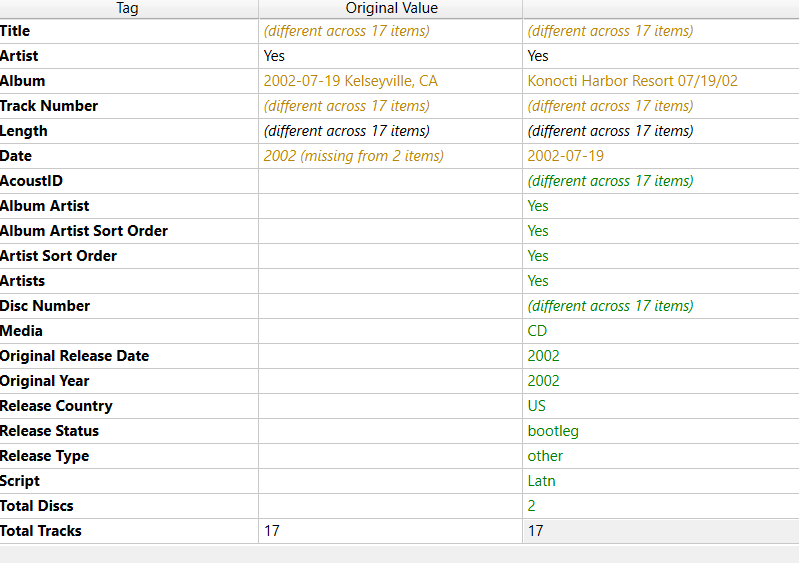 Bootlegs get bootlegged and repackaged sometimes. They may have both sourced it from a tape and just cut it up different. I see this happen with Pink Floyd a lot.

The MB release track lists matches the Discogs page - Yes – Yes 2002 - Konocti Harbor Resort 07-19-02 (CD) - Discogs.
Does your total album time add up the same, even if tracks are split different?
Does it sound correct when you listen to it?

Then I would add it to database as a new Release, mark as Digital Media as the source. And use your track names and times in that new Release. Stick it in the same Release Group. Any nfo file in the torrent package? Add the info that you do know. For example, your album it titled “2002-07-19 Kelseyville, CA”

If it is a bootleg that can be found, you are not going to be the only one with it.

To make adding the release simple, cluster it on the left and Right Click and look for “Add Cluster as Release” and it will use any tags that are in the files.

Why do I get these 2 errors? 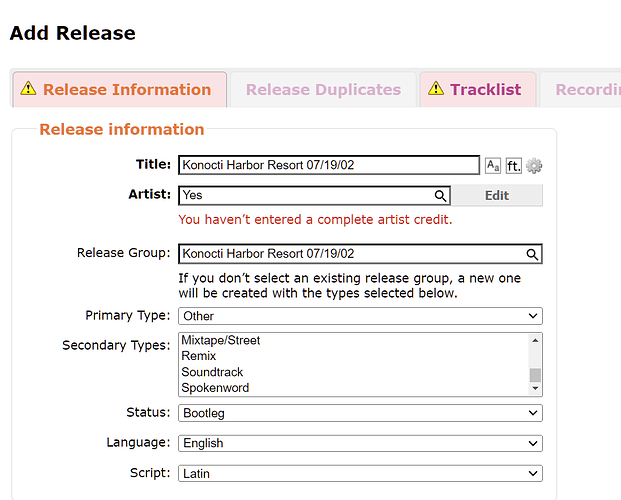 Ahh, so Yes alone isn’t enough. Too confusing for the DB?

You need to click the search icons for artist and release group. Also the type of album \ live.

Your album title should be what is in that actual downloaded item. Your original images show cleaned up date and different location “2002-07-19 Kelseyville, CA”. As you have seen with the matching in Picard, you need to stick to what is on the actual album as issued by the bootlegger.

I have had a look at your new release, and you have made a number of errors. (For example, you managed to copy part of the old track list instead of adding your own different track list)

I’ve added some notes to explain how to try and correct these. I also merged the release groups.

It doesn’t help that the first example you tried to copy has its own errors.

I gave up. It was late at night and whatever I did it wanted to add a second playlist (the original) to the one I was making. Is what I did saved somewhere? I can’t seem to find it. Maybe delete the whole thing, if possible?

As you are still within 24 hours you can just edit it and it will work now.

Try again with the data copied from Picard, but don’t link any recordings.

Or we merge this one into the other one and start fresh again. (No deleting here, has to merge)

Lets start fresh, please. It was late at night, hehe.

Yeah… makes sense. (I’ll merge the messy one away for you) I’ll help walk you through the new addition if you want. Start with using Picard to import the release.

Drag all the tracks onto the left hand side, and Cluster them. Then Right Click, “Submit Cluster as Release”. IF you have Disc 1 \ Disc 2 numbers set in the tags it will split the two CDs correctly for you. (Tip - fix those numbers in MP3TAG first before doing the submit).

This also puts all the track times in then.

I’ve set that first attempt to now merge into the one you copied the data from. So lets try again.

Reading @yindesu link would also be a cunning move. And some of the notes I left on your first attempt.

You can skip the bit about selection a duplicate release as the “Submit Cluster as Release” will do that for you.

It has to wait. I’ve been ripping and adding torrents all day.

I’m around most evenings (UK time). Do read the help files linked above. And don’t worry about making mistakes - you don’t learn anything if you don’t feck it all up and have to untangle it.

The main tip for errors is realise that you have a 24 grace period when adding a new Release that lets you correct that release until you are happy with it. Just post here any time you need help. (A tip - don’t start by calling the database stupid… that’s not going to get you good help

(Oh - and don’t mention the “T Word” too much as MB is about legit music from paid for sources. Talking about concert bootlegs like this is fine, just no pirates

or they may you walk the plank)

There are at least two entities named “Yes” and many more with variations of that name, so you need to click the seach magnifier and pick the correct one. When it turns green you’re good to proceed.