Should Promo releases that are simply physically-watermarked copies of the Official release be added as duplicate releases?

It’s common for a few “promotional” copies of an official release to be made by physically watermarking it. For example,

Should these be entered into MusicBrainz as separate releases from the Official release? I am pretty sure not, but I can’t find the relevant discussion(s).

At least Discogs treats them the same per their guidelines:

That’s funny, because the edit vote that spawned this is separated in Discogs.

Yes thanks @chaban for this doc because they are often separated by some Discogs users who don’t know this doc.

I think if it says it’s promotional on the sticker or stamp, it can be a separate release.

for example, my copy of Katrina and the Waves seems like it’s identical to the commercial release, save for the stamp on the front that says it’s a promotional release. (I also just realized the scan I added from Discogs is inaccurate, since it doesn’t show the stamp) 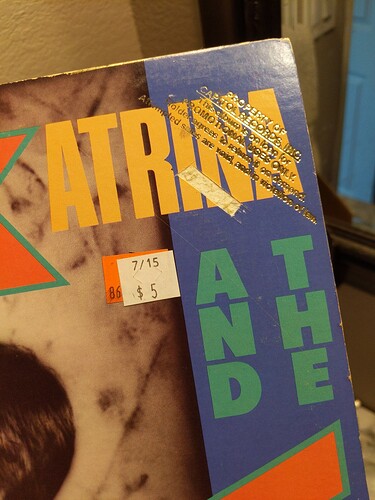 might be related, but if someone wants to document cut-out releases, I don’t think they should be merged, as long as they’re well-marked in the database with an annotation and/or disambiguation, listed as “Official” too

Pages for logged out editors learn more In the recording industry, a cut-out refers to a deeply discounted or remaindered copy of an LP, 45 RPM single, cassette tape, compact disc or other item. When LPs were the primary medium for the commercial distribution of sound recordings, manufacturers would cut the corner, punch a hole, or add a notch to the spine of the jacket of unsold records returned from retailers; these "cut-outs" might then be re-sold to record retailers or other sales ...

I would say the opposite to @UltimateRiff If it is otherwsie physically the same, I’ve treated it as the same. An example I own: Release “Levellers” by Levellers - Cover Art - MusicBrainz

That has gold text stamped onto a standard cover. I just uploaded that cover as alternate artwork. The CD construction, and all other artwork, is just a standard release.

This is something done after the production line has created the product. Someone grabs a few from the warehouse and stamps them \ marks them. This is the same as not treating a signed copy as a separate item.

Promos should be for when there is a real physical difference. Like the promo single sent out in a separate promo cover. This is just to stop the radio show\reviewer from selling their CDs

That hole punch thing - it also happens on excess stock. Sometimes the distributor will pass on excess stock to be sold cheap and they punch holes in barcodes to stop it being sold at full price.

Sometimes Discogs focus on being a shop stands out a little too much when they are trying to make some kind of “added value” on an item.

I’ve always thought the releases with any stamp like shown above were promo releases. It literally says it is on the release. I just don’t see how they shouldn’t be separate. Now hole punches, etc. that could be anything. And as far as Discogs, seems no one pays attention to that. I see promos like that all over that site.

I’m very much ‘why not’ when it comes to letting people add new releases, as long as well disambiguated and explained, and I feel the same way about the gold stamp (this is my first time seeing that). Pretty cool!

If some people collect those or have copies with and without it in their collection shouldn’t we let them track that if they want?

On the other hand stamping a hole in the cover or a promo sticker on the case is a bit less tangible, I probably wouldn’t split those. But maybe someone would have a great reason to that I don’t know about.

I’ve always thought the releases with any stamp like shown above were promo releases. It literally says it is on the release.

The way I literally read that is - here is a copy we have pulled from the normal production line. You are not supposed to sell it. It is for promotional use. So we damage the cover to stop you selling it.

When you get a proper promo single it is packaged differently and will have a different track list. It is made directly for promotion. This just has a simple to add gold stamp that could even be done in the shop.

My mom used to work for a radio station. I have some of these that are the same with just that gold stamp. They came from the label directly to the station. I always added them as promo releases. I’m surprised that others hadn’t been honestly. She never brought home any “white label” type promos. I suppose because we had them, they were handouts from the labels and not the ones they actually used on air, but I never really considered a distinction. I just thought of them as all promos. I don’t have a strong opinion on this, I’m just surprised that others didn’t mark these as promos.

As far as I remember, the discogs rules states if the promo copy was just altered by a stamp or sticker, punch out, it’s the same. It’s only a separate release when the promotional copy was physically changed, like printed “promo only” text on the cover or special etchings. This is the reason the Japanese promo copies are handled as unique.
I’m talking about etchings like this.

But it’s still debatable tbh. I like to keep them separately.

If it is otherwise physically the same, I’ve treated it as the same.

The main reason I categorise my albums as actual releases is because in my music collection these are my actual release version. If I found that Levellers album had been swapped to Promo I’d need to go and change my tags on Picard. This is just a normal CD with after production ink added. Just the same as signed editions by the band are not separate releases.

I see it the same as this naff sticker: 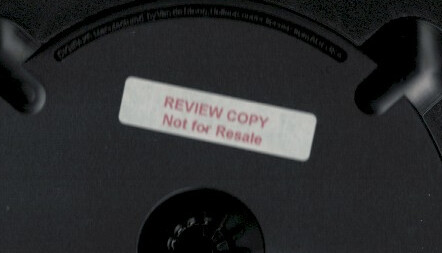 If this was a CD-R that had come from a different part of the production line I would file it under Promo. Or if the printing on the CD had changed - I’d have gone promo. Red ink stamp added after production doesn’t really change anything about the album.