What I am trying to do:
I am trying to add a Japanese album to my music collection. The album has track names officially in Japanese, but since I don’t read Japanese well I would like to have the track titles in, what we call “romanji”, that is the title translated to latin letters so foreigners can read it.

What I have done:
There was no release on Music Brainz that had the album tracks with romanji/latin letters. So I decided to add a new release, but link each track to existing releases.

What I expect to happen:
After adding the release to Music Brainz I proceeded to add the music to Picard. I did a manual search for reid:(8e313864-c3b5-4cef-8081-893ceee7846d) to match the release I just added to Music Brainz. So now I expected all the track titles to format into romanji (latin translation).

What is happening:
In Picard however, the tracks does not get romanji track names. They are still formatted in Japanese.

What I have tried:
I tried to remove the relationship type, but to no avail. The tracks still show up in Japanese.

Please help me out. I would love to learn how this works. I already love Music Brainz, but it is very overwhelming to learn.

It seems to work now

Perhaps it just needed some time?
Still a bit confused if I should use the track relationship or not though…

I’m not entirely sure what happened here, but you added separate recordings for the translated track titles in edit #66811795 and I think this is where it went wrong the first time. But actually this is not how this should be handled, the recordings need to be merged again.

But for some other notes:

I have entered merge edits for the recording again. Once the merged are through it could be you get the same behavior in Picard again, but I actually don’t know why. Picard is supposed to use the track titles, not the recording titles.

But maybe you have some plugin which is causing this? Which plugins do you have enabled?

So the release groups are merged now?
Seems like it is working in Picard. I get the same results after the merge 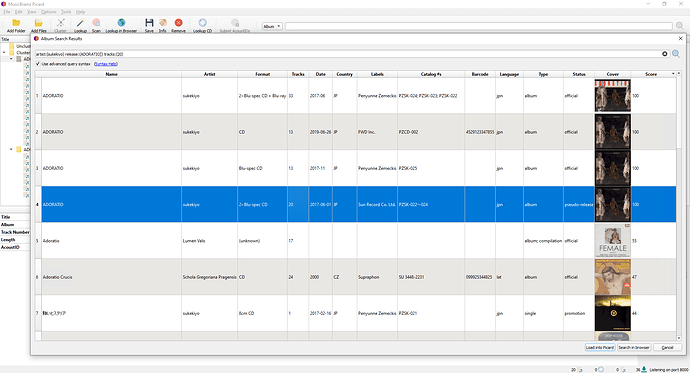 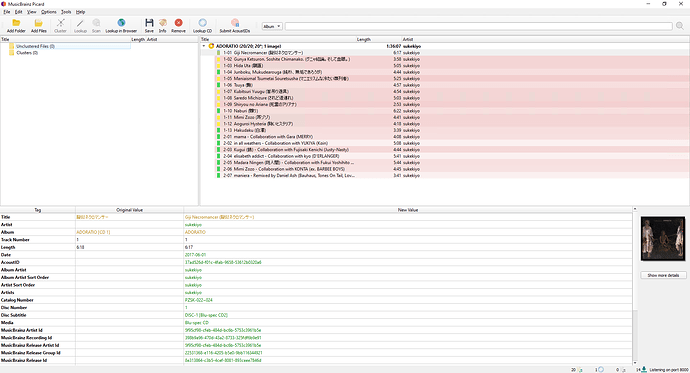