Renaming of files/folders not as expected

Hi.
I try to rename files, but it looks like these files is not renamed as they should, there is also no folder. Just saved directly a root.

The renaming script it the default.
Can anyone see why it is not working? 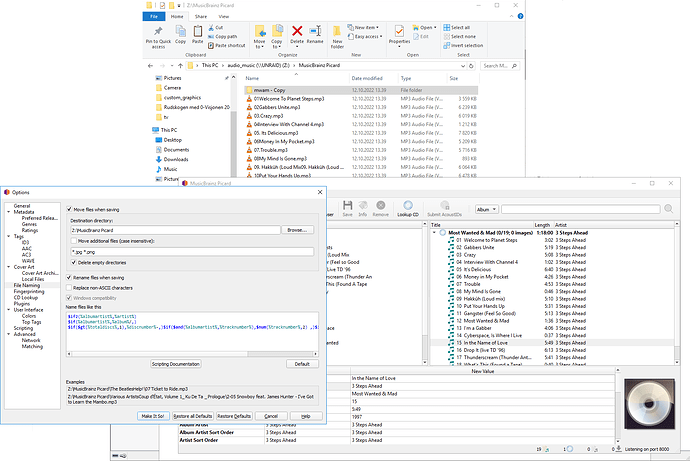 Welcome to the community. You came to the right place with your question, and we’ll try to help you through the process.

It’s tough to tell from the info you provided, but it appears that you are not matching the files in the clustering pane to the corresponding tracks in the Album pane. See the Matching Files to Tracks section in the documentation for more information. My guess is that the renaming script is trying to use metadata values such as “albumartist” which does not exist in the files’ existing metadata. In addition, there should be a slash “/” at the end of the first line of the script to force the creation of a directory.

I think that the script to do the naming the way that you want would be something like:

Note that this will always include a disc number, even if there is only one disc in the release. To leave the disc number off of single-disc releases, change the final line to:

There is also a brief tutorial on Writing a File Naming Script available, which may help clarify the example script provided above.

Finally, your screen shots seem to indicate that you’re using an old version of Picard. I suggest updating to the latest version available from the download page on the Picard website.

Thanks for a very good reply @rdswift. It is working now (however I see that the musicbrainz missing a lot of releases).
Is it possible to match by discogs?

anyway, did no manage to fund out how to select one of the tracks if I have multiple choises, like this: 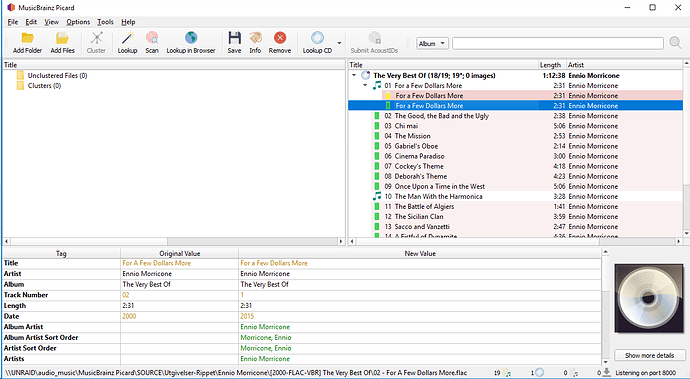 Is it possible to match by discogs?

No (Picard is the MusicBrainz tagger after all), but there are tools that help you importing releases from Discogs into MusicBrainz. See e.g. this discussion: Is it possible to import a recording from Discogs? - #2 by IvanDobsky

Just curious: Do you have some examples of the releases you could not find in MusicBrainz but on Discogs?

anyway, did no manage to fund out how to select one of the tracks if I have multiple choises, like this:

You can drag and drop files from one track to another.

View credits, reviews, tracks and shop for the 2008 CDr release of "Junkie Volume 1" on Discogs.

View credits, reviews, tracks and shop for the 2008 CDr release of "Junkie Volume 2" on Discogs.

The Sickest Squad - The Celebration Of Decerebration

View credits, reviews, tracks and shop for the 2008 CD release of "The Celebration Of Decerebration" on Discogs. 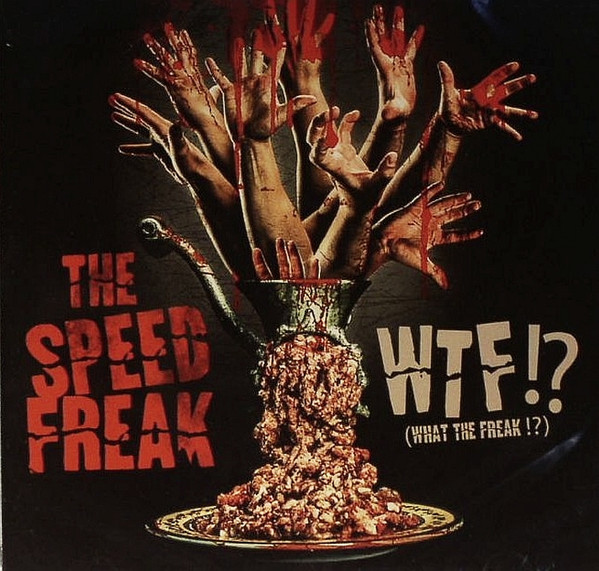 Edit: added last one myself with userscript. Gong to do it for the others aswell

added last one myself with userscript. Gong to do it for the others aswell

Thank you, and welcome! People like you are what makes MB awesome.