I use this workflow to tag my media…

While the above works, it feels like Picard could better allocate the tracks without assistance because all of the required information is there. So I feel perhaps I am doing it wrong.

You can drop the files directly on the release instead, then Picard will try to match the files to the tracks. If you drag a file on a track it will attach it to exactly that track. If you drag mutiple on a track it will assigne the files in order to that track and the following (that’s useful if you e.g. want to drag files 3-9 and manually match them, without having to select each tag. There is a bit of a hidden feature there also, if you hold the Alt key while dropping the files it will assign all the files to the same track. Usually that’s probably not what one wants, but there are some users who have multiple copies of the same file.

See also the documentation for this and more options. Also just for completeness: Instead of first loading the release you can of course also try to have Picard do this automatically by using lookup on the cluster.

While the above works, it feels like Picard could better allocate the tracks without assistance because all of the required information is there. So I feel perhaps I am doing it wrong.

I don’t think you do something wrong, rather it can probably be improved. But without knowing anything about your existing metadata in the files and the release you try to match it I cannot really answer this.

In general when you let Picard automatically match files to a release, Picard goes through all the files. First it checks if the file already has a MB recording ID, if yes and that matches any of the tracks it assigns it to that track. If not, then Picard compares the core metadata (title, artist, length, album, tracknumber, discnumber) to each of the tracks in the releases. It then assigns the file to the track with the highest similarity.

So either your file already had a (probably wrong) recording ID saved, or Picard indeed considered it more similar to that track then to the correct track.

Maybe you can give the above metadata for a wrongly matched file and for both the automatically matched track and the correct track. Then we could compare and see why.

Hi thanks for the reply, here is an example of a track in Picard that doesn’t get allocated onto the correct track 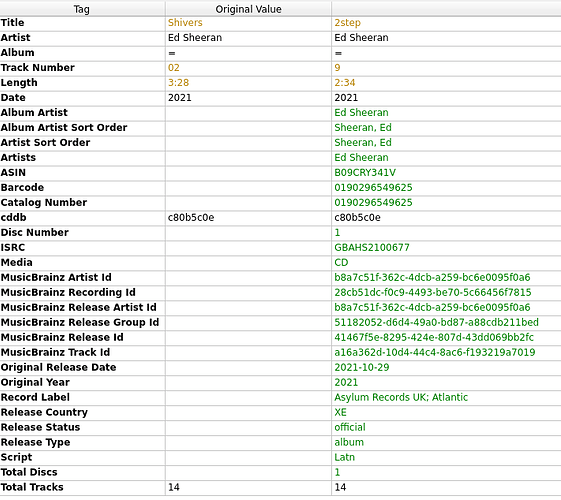 It was allocated under track 9 despite the file name. the metadata track number, length and title. It seems to me there is enough info there to make the right selection of track 2.

I can’t reproduce this. If I have an a file with that length and exactly your metadata and I drag this onto the release https://musicbrainz.org/release/41467f5e-8295-424e-807d-43dd069bb2fc on the right pane than Picard assigns it to track 2. The same happens if I just use “Lookup” on the file, or if I intentionally assign it to the wrong track and then use refresh on the release as in your original description.

Are you maybe doing something different? E.g. using “Scan” or so?

I made a recording but I couldn’t add it to the thread. You can access it here… out.mp4 - File.re temporary file sharing
It will be automatically deleted in 24 hours, on 30 November 2021 at 10:39 (CET)

That’s really strange, but definitely looks like a bug. I’ll see if I can reproduce that behavior. I wonder if it is related to some files going to the unmatched list first.

Let me know if I can try anything for you. Also, I just tried using “scan” (after installing Chromaprint, not installed with Picard on the Arch Linux I’m using. That detected all tracks correctly.

Also if it helps in any way, I can send you my env (I’m using a Vagrant box - I can sent you my Vagrant file and provisioner script, they’ll need slight tweaks for your host network etc).