Playlist Creation Is A Pain

So fellow MBrainz’er @UltimateRiff showed me that I can make playlists on LB, which is a cool feature I could work on.

Have an idea for a playlist (doesn’t really matter to this problem) and create it, then to add tracks.

First track is Purple Rain by Prince and the Revolution; pretty popular song, most people probably know it.

So I type in Purple Rain, the query results are: 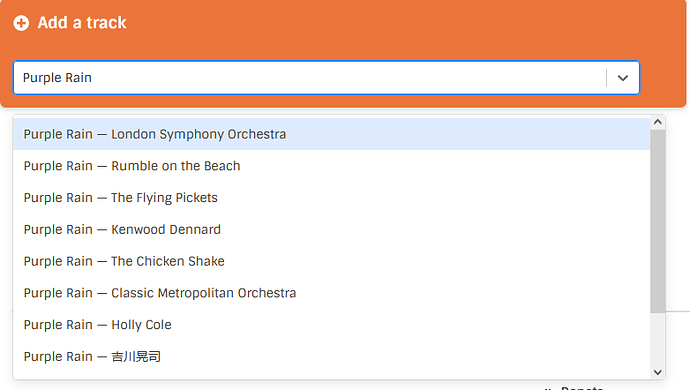 OK not great, it’s managed to pull a load of covers (probably) instead of the original. 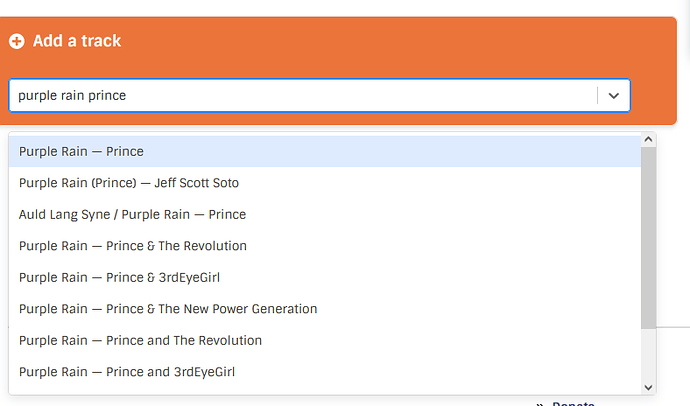 The first result, although the wrong artist (but lets take this from the laymans point of view of what would they chose) goes to a demo recording:

OK so let’s now say we chose the Prince and The Revolution option:

Live recording of Purple Rain by Prince and The Revolution
Duration: 15:10

Nope that’s a different live version, not even the one from the album

So I find the album:

Now I have the correct recording entity:

Live recording of Purple Rain by Prince and The Revolution
Duration: 08:41

In Short: how do I add Purple Rain to my playlist.

In Long: is there not some additional logic that could be introduced here, for example weighting recordings which have lots of links against them (such as recording entity 85a752f8-cbad-42e6-8828-bd81318e3c7d) over recordings which don’t?

This isn’t consistent however, for example the next track is Lay Lady Lay by Bob Dylan.

Type it in, first result is:

And yet it’s not like there’s only one Lay Lady Lay to possibly choose from (200+ possibles):

Thanks for your feedback – I totally see your point. The backend that supports this track search is actually an internal service we’ve exposed, mostly as a “lets use it, it should work ok. then we’ll see what users say” kind of moment. So, very likely not ideal from a user or from a hosting perspective.

I’ve got a number of ideas for how to improve this:

A good start would be for you to open a ticket on tickets.metabrainz.org and dumping the essence of this post into a ticket for ListenBrainz so can can track this issue and plan for an improvement.

I have created a ticket:

I hope this has enough detail, as I think this is the first one I’ve ever raised