Couple of questions about file naming

Hello there. I started to use Picard for 3 days, I totally admire it and musicbrainz project, even contributed some edits right away. But I’ll cut to the point since I have some little frustration.

I’m a coding brainlet, for any type of it. I made a simple script which was enough for me, but some tracks with slash or other OS cruical characters ended up with underscore. I looked up documentation but couldn’t figure anything. Need help.
The second concern is that some tracks show featuring or collaboral artist instead of the main artist in both filename and idtag. I want to make this as the featuring artist or & artist show at the end of filename within paranthesis, e.g
Röyksopp - Album - Number - Ice Machine (ft. Susanne Sundfor)
instead of
Röyksopp feat. (or &) Susanne - Ice machine

This makes it both complicated for me for file/folder hierarchy and player apps.

As you will see in the attached images. Hope I could make it clear. I want to get rid of _underscore and add any secondary artist to the end of filename, and only main artist to be considered in tagging.

Thank you. I’m just lost, hope you understand me. oh also if there’s anything special about classical tagging, as I felt, I’d like to have same filename type.
(Carl Orff - Carmina Burana - In Taberna Quando Sumus (London or Arranjeur etc.) 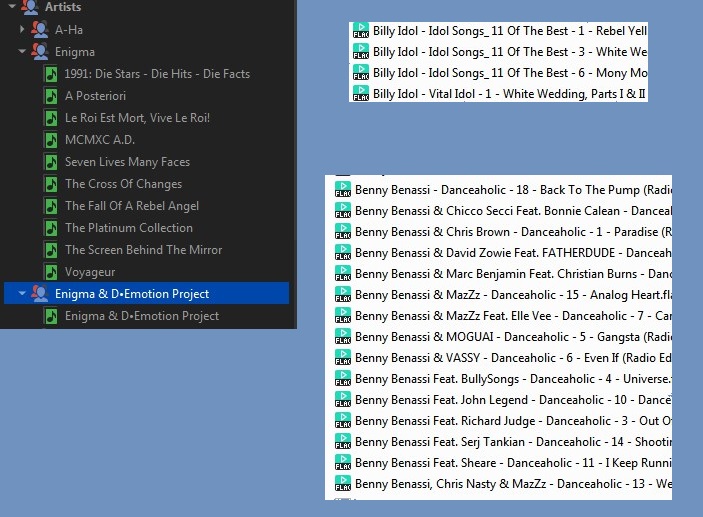 As far as I know, it’s not possible to change Picards behaviour in this case on Windows.

I want to make this as the featuring artist or & artist show at the end of filename within paranthesis, e.g
Röyksopp - Album - Number - Ice Machine (ft. Susanne Sundfor)
instead of
Röyksopp feat. (or &) Susanne - Ice machine

The Feat. Artists in Titles does that, it can be installed via Options → Options → Plugins.

thanks a lot. what about separating collaborating artists from the main? any ideas?

As far as I know, it’s not possible to change Picards behaviour in this case on Windows.

You can replace most characters by using the $replace function in your naming script. This works for all special characters except slash / and backslash \.

An explanation for this together with a workaround for that is at:

That’s actually not as easy as using $replace in the naming script. The slash / is a special character that is used as a folder separator in the naming script. To prevent that a slash in any variable is treated as a folder separator it gets replaced in all variables before the scripting is actually executed. That means if you have %artist% set to AC/DC it will be converted to AC_DC before being processed by the script. If that would not happen you would end up with a folder hierarchy of AC > DC…

With the “artist feat. artist” issue, it may be worth using the %albumartist% instead. This tends to be more consistent for a single album. Whereas %artist% is more specific to a single track and therefore attracts the “feat” bits.

Also look in Options and check the list of plugins. There are some that rearrange where the “feat.” bits go which may be closer to your needs. (Help files are a bit vague as usual so best to experiment with those)

thanks guys its been very helpful. about underscores and & artists, I’ll do it manually by windows explorer or if I can find any good software that bulk edits filenames like notepad++ does for texts.

wouldn’t %albumartist% make, like for music from compilations " VA - music.mp3" ?

Alright Update, since I hope this would be helpful for anyone in the future.

There is a free software called Bulk Rename Utility which is a powerful one. It done the job beautifully. I’ll post it since it’s a freeware.

for recursive renaming, checked “Subfolders” in the Filters(12) tab at the bottom.
chose the parent folder from folder select. then clicked list and ctrl+A for everything
then again from bottom area using the Rename(3) tab, I did the following 4 jobs in ORDER, otherwise would result in garbage;

Also for the annoying " & " features, in already renamed files, I replaced it with single comma using the same procedure. Artist1, Artist2 - asd.mp3

This was all I could do about & sign, still trying to find a way to throw second artist at the end of title as featuring. Better than nothing.

HAHA - I should learn to read the whole thread before reply. Have just deleted the first part of my reply as you found Bulk File Renamer.

Also have a look at MP3TAG.de as it has a pretty flexible system of using the tags as filenames and renaming files from that.

wouldn’t %albumartist% make, like for music from compilations " VA - music.mp3" ?

Yes - that would be true. So you could put an exception for those if you really don’t want the Various Artists bit. Personally I am tilted to keeping albums together.

VA albums it’s all their fault! lol. Thanks a lot I’ll take a look.

On Windows, you can use PowerShell to do quick renames.

will do your rename without having to install any third party software.

VA albums it’s all their fault! lol. Thanks a lot I’ll take a look.

That VA artist puts out more albums than almost anyone else does.

I have seen some scripts do something like if%albumartist% = “Various Artist” then use %artist%.

There should also be a Compilation flag of some form set for these kind of albums. (though, of course, there are compilations of a single artist)

online Documentation is not enough on that. does it completely use foobar scripts and them only? I’ll check it out if so.

I have seen some scripts do something like if%albumartist% = “Various Artist” then use %artist%.

Those should really check for the Various Artists’ MBID as there are at least three non-VA “Various Artists” bands/musicians who would potentially be caught be a simple check like that.