Compilations - are they useful?

This can be summarised as a compilation is either

I have a number of compilation CDs that I’ve ripped and encoded etc and loaded into at least one player with some non ideal results.

On another player (slimserver/logitech music server) all the artwork is organised by artist and then album. So for a various artists album there is no way to have artwork per artist… A common reason for buying a compilation CD is to get some songs (usually singles) cheaply… so why not split the compilation into singles… and make each song its own ‘single’? Not correct from a purist point of view - and doesn’t follow musicbrainz guidelines, but it allows:

A related, separate question is how should compilations ideally work? I struggle with the idea that a greatest hits album by an artist is a compilation and how to distinguish these from non-compilation albums from a single artist especially when the record company usually adds one or two new songs that have not been previously released to encourage all the diehard fans to buy the album to boost sales…

Sounds like that is more a Media Player issue than a MB one. I don’t use either of those players so can’t give a solution. You should be able to hack a Picard script together to tweak things for your chosen players.

I wrote a longer reply, then realised it is in that other thread. To me a compilation is a Release that includes tracks that have previously been released on other albums. Picard scripting will save you.

I see it in the overlap or ‘grey area’ of music players and metadata standards. I’ve not found any music player implementation of compilations and/or a metadata standard that make sense to me. I’m also not sure what ‘sense’ actually is! I’d like to think that I’ll know it when I see it. I thought I’d ask to seen what others think

In one case, (itunes + iphone music app), the artists for the tracks on a compilation are not listed in the list of artists and their songs

iTunes / Apple Music has a separate “compilation” flag that can be set on files and which triggers this behavior. It’s actually meant to be used for various artists compilations. I’d recommend to use it only for those, and not set it for the best of albums. That’s also what Picard does, it sets this tag only if the album artist is Various Artists - MusicBrainz.

iTunes / Apple Music has a separate “compilation” flag that can be set on files and which triggers this behavior. It’s actually meant to be used for various artists compilations. I’d recommend to use it only for those, and not set it for the best of albums. That’s also what Picard does, it sets this tag only if the album artist is Various Artists - MusicBrainz.

Yes, I’m aware of it this. When you turn it on, all the artists and their songs disappear from. being listed under artists… as I describe above in the original posting. It creates confusion. I think its a flawed approach to handling compilations. The ipod worked better.

When you turn it on, all the artists and their songs disappear from. being listed under artists

I think this depends on how you have your library displayed. I’m not an expert in iTunes, but it has lots of options for how you sort and organize things.

I’ve been using MusicBee for almost a decade, and (as most modern players do) it makes a clear distinction between Artist (i.e. Track Artist) and Album Artist. For compilations, you can choose to tag with an album artist like Various Artists or whatever you want to use (this is configurable in Picard), or you can leave album artist blank and take advantage of the iTunes Compilation flag to let MusicBee set the Album Artist for you. If you choose to order your library by Album Artist, then tracks might seem to disappear because their compilation tracks are organized under Various Artists (or whatever). But if you order by Artist, then an artist’s tracks will remain together, at the expense of breaking up the album across several artists.

An example of how it works for me: In Foobar 2000 I have my basic navigation displayed by folder structure, where I do separate out Various Artist releases: 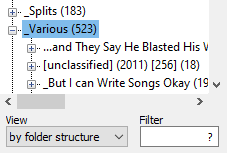 Typing an artist into the filter will give all tracks, including in various artist folders, by that artist: 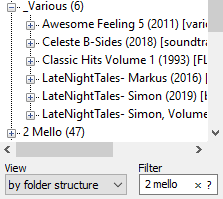 After I’ve pulled some or all of them into the playlist panel I can then sort by either Album Artist or Artist, and choose which (or both or none of them) to display:

Basically, Picard setting both tags is perfect for me!

How to set it up best for your preferences is another matter, and your player may have limitations.

It sounds like you might want to set up Picard to write the track Artist tag to the Album Artist field - this would cause your player to display each compilation track as a ‘single’, in that artists discography. No need to change MB’s guidelines! Would just be an extra line of code in your tagger script

This is just a pointer to the general approach of splitting up the compilations I was thinking of but didn’t explain well. Thanks to @IvanDobsky here.