My code currently can create the TOC data (lead out + start sectors of all songs), or if necessary i can hash together the “music brainz disc ID” (as distinct from the old freedb “DiscID”). not doing that now but if you think i need to, let me know.

i get back a list of “releases”, in this case, i get 12 items. but only two of them have one “media” containing one “disc”. which seems to be the list i’m looking for? i can stick’m in a menu by putting the “titles” in there, ends up looking like this: 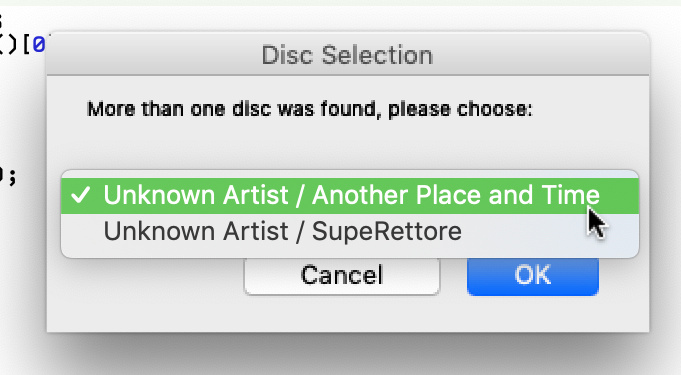 behind the scenes, the menu model tracks the “disc id”, in this case “C3ABjifq8EDMmxSSopt480krqr0-”, but then, how do i get a tracks listing with track, song name, artist, album, genre, for every track on that specific disc?
ie: what would be the cURL command to fetch the tracks from exactly one disc, and how would i specify that one disc, since even “musicbrainz disc id” can return multiple hits?

Also, how do i get the artist for that disc? it doesn’t come in with the “discid” lookup…

is there doc for “how to get the same info you got using freedb” or “a programmer’s guide to musicbrainz API for those who previously used freedb” ?

You can use the Inc parameter to specify what additional data to include. E.g. this will contain details about artists and the track lists:

The available parameters are documented at

that was quite helpful, i can now see artist info for each disc

and SOMETIMES those discs have something OTHER than N tracks (why am i getting info on discs that don’t have the same number of tracks as what i specified in the TOC? can i tell it not to return that?)

the “freedb” ui that used to be provided on top of the musicbrainz db, used to be able to include “in the style of” artist references for “cover songs”, eg: a karaoke disc is typically a compilation of songs from various artists, and each song in the list of tracks would have a separate “artist” entry, showing the original “in the style of” artist, not the “artist” who recorded this karaoke version of the song. how would i get “original artist” ? how did the freeb ui do it?

I’ve ran in to this issue before and it was a bug in my tagger for sometime before I realised it. When I “fixed” it, I didn’t question/change the parameters I was sending - I just filtered out the results myself.

and each of those can have ZERO or more “disc” items (why does it bother returning those media? can i tell it NOT to?)

The disc entries are for the actual disc IDs that are attached to a medium. As you are doing a fuzzy search you also get results for entries that have no disc IDs attached to them. If you would lookup the actual disc ID (instead of using the dummy -) you’d get only the results that match exactly the ID, with a fallback to also include fuzzy results if the disc ID is not found.

and SOMETIMES those discs have something OTHER than N tracks

The search is looking for matching releases, but then returns the full data for that release. If it is a multi-disc release you’ll get all of them. You’d need to filter out those.

showing the original “in the style of” artist, not the “artist” who recorded this karaoke version of the song.