The ensemble, Pygmalion, is credited but so are its members. This creates a very busy artists list and is not optimal for display when playing.

I would personally prefer the main soloists, conductor and the ensemble, perhaps adding individuals to ensemble definition, but the editor thought otherwise.

Do we have any guidelines regarding ensembles ? Did not see any in Classical Style Guide.

The main credited artist for a recording that has, say, both a quartet and its members is IMO the quartet, and that’s what I usually use as the recording artist. I’ll use the specific members though for a piece for violin and cello in the same album, even if the quartet is the album artist. This is not a guideline as such though, just what I feel makes most sense

Today I found this document, which is (apparently?) used by major labels. I find it very consistent and largely in line with our rules. In my opinion, we should adopt it 1:1 as our classical music style guide. (It also answers @nadl40’s question.)

This makes perfect sense, it will also work for let say Jazz or Rock.

Can this suggestion, after proper discourse, make it into Classical Style Guide ?

The release that I linked could be edited but I would not do it without Guide because the original editor might like it the way it is.

I would normally credit just the ensemble for Artist-Recording relationships even if the label had a full list of members in the accompanying booklet. However, in this case the label saw fit to highlight exactly which sections of the chamber ensemble performed on each track, and whether members performed a solo part. I followed their lead when adding the release and its recordings.

I’ve uploaded the booklet and do not see direct credits on the tracks page.

I do see credits later when Pygmalion ensemble members are listed 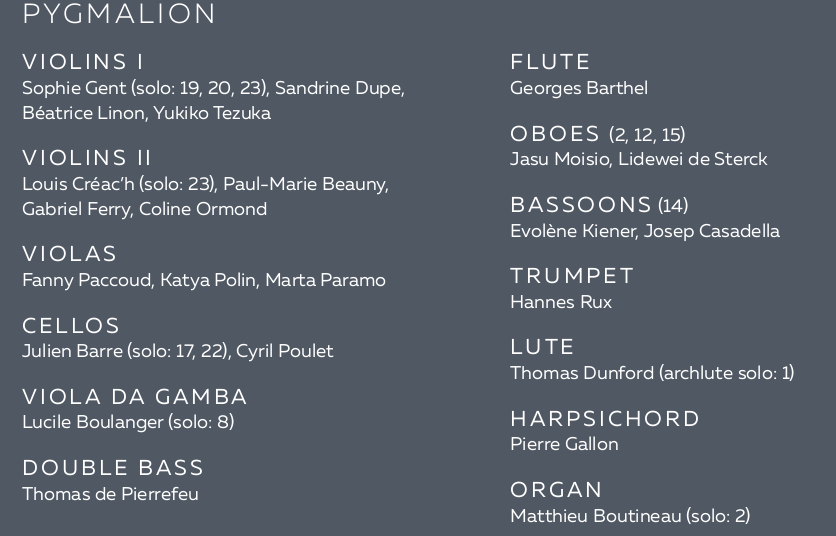 Some artists are mentioned as soloists, some are not. For example, Georges Barthel is not, although he is linked to all tracks of this album.

Record companies those days do like to list ensemble or even Orchestra members, seen this many times, but does this mean that we should link them to individual tracks ?

Record companies those days do like to list ensemble or even Orchestra members, seen this many times, but does this mean that we should link them to individual tracks ?

I think they should be individually credited at the recording level in this particular case for the reasons I gave. If, for example, a full list of members of a symphony orchestra were printed in the booklet without context (e.g. by not showing who played on which recordings), then I would credit just the named ensemble at the recording level instead of the entire list of individuals.

Agreed with crediting them at the recording level… but with relationships. I’d use the ensemble plus those players marked as soloists for the recording credit still