One of the current features of Picard is to allow the user to select which type(s) of images should be downloaded and used from CAA. The selection dialog looks something like:

Since the introduction of the Raw/Unedited type in STYLE-980, it became an issue that there was no way to exclude an image type. This was raised in JIRA ticket PICARD-1273. I’ve been working on this and am proposing a change to the way that Picard selects CAA images.

The way it works now is that Picard compares the list of types associated with an image against the list of types selected by the user. If there is an overlap between the two lists, then the image is accepted for processing.

My proposal sees the addition of an “exclude” list and some additional decision logic. The first part would be the same, accepting any images that have an overlap between their associated types and the types in the user’s “include” list. The accepted images would then undergo a second check to see if any of their associated types match any of the types in the user’s “exclude” list. If there is an overlap, the image would be removed from the list of images to be downloaded and used. In short, images with a type matching a type in the “exclude” list would never be downloaded and used.

The revised Cover art types selection dialog would look something like: 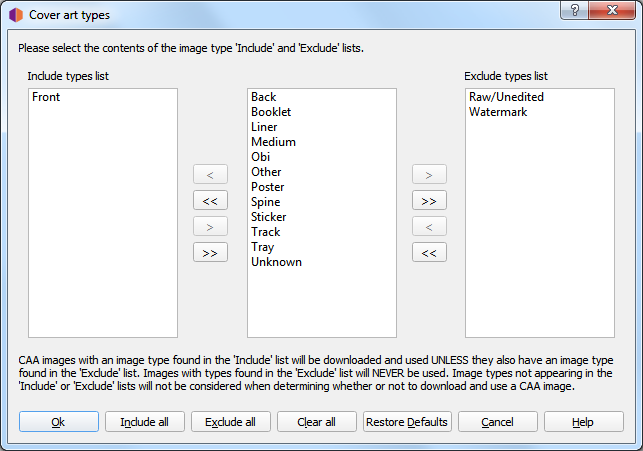 Picard Pull Request #914 has been opened to begin the process of implementing this change, and the code changes and discussion during development are available there. One of @Zas’s excellent suggestions was to open a thread here in the discussion forum to see what the community thought of the proposal and if there are any other comments and suggestions. What do you think?