Are there technical problems at AcoustID?

2 Likes
AcoustIDs not sent despite Picard says Sucessful when doing on more than one release
IvanDobsky February 8, 2021, 5:28pm #2

Hello, I loaded 3 releases in Picard: For teh last one I had to manually attached each track to the release Then for all releases I clicked Generate AcoustID fingerprints within picard When done I clicked “Submit AcoustIDs” Then no fingerpritns was appearing for Best of 2008 So I try to load again but only one track and submit AcoustIDs and then the fingerprint directly appeared in MBz Are we forced to send release by release?

@lukz are you following this?

!'ve also been trying for the last few days to add AcoustIDs to releases with Picard and with the https://acoustid.org/fingerprinter tool, but to no avail.

I’m also unable to add fingerprints. It must have been early on the 4th because that day has ~300 successful submissions.

Sorry about these problems. I was busy with other things and did not notice the import issues. I’m hoping to have them resolved soon.

Great to have you reporting in up for duty.

So are AcoustID:s “submitted OK” by Picard during this incident queued OK or lost?

They are not lost, but it will take some work on my side to get them imported.

It should be noted that the issues are not being reflected on the https://status.acoustid.org/ page. Can something be added there to let people know, possibly even with a link to this discussion and a note that the submitted ID’s won’t be lost?

Seems to me that while AcoustID is nominally up and running again, I am still seeing erratic behaviour from Picard when it comes to submitting new fingerprints and having them show up reliably in the related MusicBrainz Recordings. Clearly, Picard is not yet able to reliably provide this functionality. I can’t say for sure whether this problem lies 100% with AcoustID, Picard, or MusicBrainz. Given that AcoustID has had recent problems it remains the prime culprit, but I have to say I’m not entirely sure about that.

Clearly, Picard is not yet able to reliably provide this functionality.

Can you elaborate on this? You can enable Picard’s debug log (as described at https://picard-docs.musicbrainz.org/en/troubleshooting/troubleshooting.html#getting-logs) to see what is going on exactly.

Here is an album I have been working on: I load the tracks into Picard and scan for fingerprints. It identifies this album and loads into the right-hand pane. It then matches a selection of some of the fingerprints to tracks on the album. It never correctly matches all of the tracks, just some of them, and the selection of matched tracks is never the same. I can drag the unmatched tracks onto the album so that all of the tags turn green, and upload the scans. I’ll get a “submitted successfully” message. But then I can repeat this whole process over and over again (which I have been doing over the past week) with no real change except, as I said, the selection of matched tracks always varies.

During all this time, I have even seen oddball behaviour in MusicBrainz with this album, where I can look at the individual track properties for the various tracks, and most of the time they will not have any associated fingerprints. Then the fingerprint associations would appear, but shortly afterwards would disappear again. Today, the fingerprints are all showing up, and that seems to be permanent, and I had hoped this might indicate that the problems with Picard would have gone away, but no. Picard is still doing the same thing.

I could upload a Picard debug log, I suppose, but practically I’d have to upload a good half-dozen of them to be of value, since they woild need to reflect the erratic nature of the behaviour I’m reporting.

@Zas Let me know whether, given what I’ve described, the logs would still be of value.

@Zas I can’t see how to upload the log file. It will only let me upload image files

The log file is WAAAAAY too big to just paste in here as text (nearly 1MB).

In that case enter a ticket in the bug tracker, and attach the log file to the ticket.

There always had some delay issues in the past months (taking some minutes to display new sent fingerprints, loading times depending of the hour,…) but since this event now there are strange behaviors when loading releases:

Same happen on clicking a recording then the fingerprints tab, Sometimes I see some, sometimes not even one

example below: Seeing all fingerpritns without striketrough despite almost all were unliked since 2 days 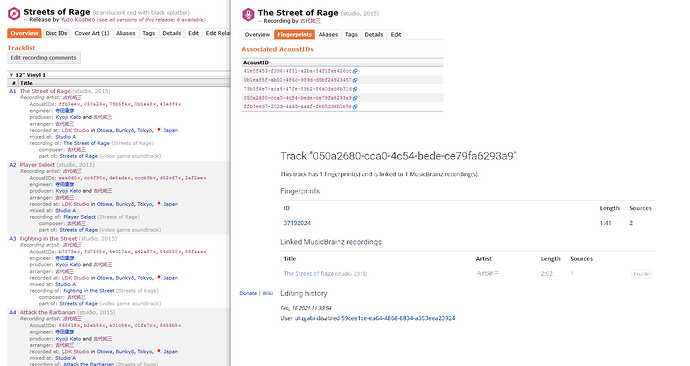 and for the release

The ticket @BitPerfectRichard created is at

On a possibly related note, I’ve got some fingerprints that consistently won’t return results, despite me having submitted them all (several times, in some cases).

Does this experience is similar than yours ? Track never recognized despite fingerprints was sent

If yes it is handled by the same ticket.