I have an album, it says "Insert this disc into your computer to see… " as it’s got some MPG files in the data partition.

When I drop the album on the left, since it’s never been tagged, I identify it, find a listing already in the DB, add the 17 audio tracks to it… 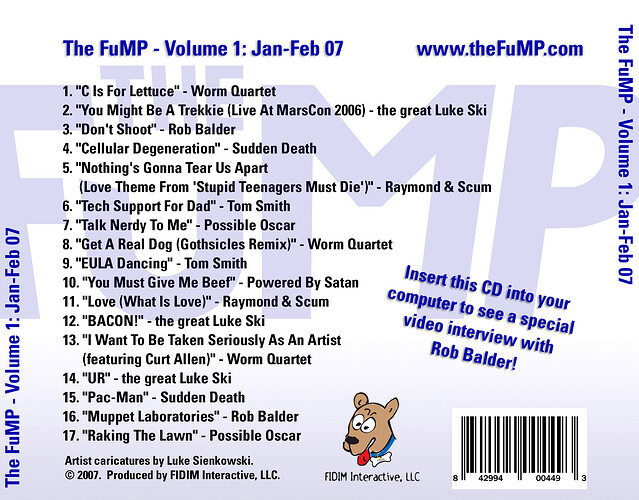 Then there’s the MPG files are still on the left, marked as errors.

…and they have zero for tags.

They’re not listed in the MBDB, though the Album Art does refer to them, so they’re part of the album, just not as tracks.

Would that mean I need to make a new release, version, or … do these just get left off and I have to put them over with the album myself, as iTunes et al, will deal with them.

Also, since there’s no tags, I added a title and it still saved it with a null filename. I’ve never messed with video files / files in a data partition of a CD.

I’m guessing that the Red Book original specification doesn’t deal with these, and maybe one of the newer revisions might? … or if it would, are they different than files on the data partition?

Often CDs are added as just plain CDs when they are actually Enhanced CDs.

According to the history, the original person who added that release to MB only typed it in from the website. Assuming you really do have the same exact edition with matching bar codes, that does imply they did not include all the data as they have never put the CD into a PC.

I think you should edit the current release, change it to an Enhanced CD, and add details of the two MPG Videos .

If an audio CD contains a data track at the end which is not visible in an audio CD player, it should not normally be included in the main part of the tracklist.

However, if such data tracks contain audio or video tracks, these tracks should be entered in the data tracks section of the tracklist (enabled by selecting the “This disc contains data tracks at the end” option in the release editor).

The second case applies here, so you should definitely add these tracks (provided you have the same release, as @IvanDobsky pointed out).

Then there’s the MPG files are still on the left, marked as errors

The others quite well explained how to edit the entry in MusicBrainz to add the files in the data section. But since Picard does not support MPEG video files you won’t be able to tag the files.

There was the videotools extension which at least allowed renaming those files (no tagging), but it is currently broken. I haven’t come around fixing it yet, actually I was thinking about removing it completely.

In this case, it does rename them, which since there are no tags, the naming results in nothing except any hard coded text I have in the file naming script.
In this particular case, the two files were in a directory within the album itself in case that makes any difference, because I also added *.mpg to the file extensions to move when moving an album. So they shouldn’t be getting left behind either.

Just so I’ve got this, - well, I guess I’ll find out by editing that one and then refreshing it on my end and seeing what it does as I’ve never dealt with an Enhanced CD in Picard before.

Otherwise, right now, if I moved the files to the right they go in the unmatched directory and don’t get touched at all. Not even just copies as part of the *.mpg setting.

Since I added *.mpg to the list of extensions to move/copy with stuff, shouldn’t they just get moved over as is, into the same directory when it’s doing the whole Album save? At least, that is what I thought the *.mpg was supposed to do. I have *.nfo, *.m3u and *.txt in there, and those move with it, and then the now empty directory gets whacked.

So if there’s mpeg files in there that are not tied to an Enhanced CD release, they should still get copied/moved at least. Which at the end of the day is at least all I want. If I’m not going to enter them into the DB at that time. I do put up Cover Art when I have larger resolution files, or others not there.

Other than this series of discs, I may only have one other, Weird Al, Straight Out of Lynwood. That one didn’t work in the car player I had at the time and the first thing I had to do was make my own from it.

Since I added *.mpg to the list of extensions to move/copy with stuff, shouldn’t they just get moved over as is, into the same directory when it’s doing the whole Album save?

Yes, but not if you have the file loaded into Picard at the same time. You have two options:

Okay, that’s all clear. I was actually editing my post down to just that, as the rest of my rambling was stepping all over itself. Plus you’ve confirmed what I am getting is intended.

I also changed it to Enhanced CD, added the two tracks and was going to re-try it after that edit got posted. That is, if I did it right at least.

Me, personally, I don’t care if they’re listed or not but since they are referred to on the Cover Art, then they should be listed. Otherwise, I always update Cover Art when I have something more/better than what is there.

Then I never have to worry about not having it later…

Picard may not support them fully today, but I am hoping you don’t give up on the video support @outsidecontext as there are a lot of mixed media disks like this around. And then there are those anniversary releases \ boxsets with DVDs and therefore MKV files post-rip. Even if the tag is just the main title and MBID this is very handy.

The renaming of the files to fit the naming scheme of the album is very useful. If they are tagged or not depends on what use one then plans to make of them.

I have found the Enhanced CDs listed in MB useful in unexpected ways as it has pointed out a couple of my CDs that I didn’t even know there were extra content on them. Though it is debatable as to how interesting an old grainy Quicktime movie at 300 pixels wide is!

@IvanDobsky
About that grainy Quicktime 1.0 rip…

That is basically the method behind the madness of the outcome from my naming script.

Steps 1+2 are combined as I own a physical CD. I have the original, and I have a rip, and both are complete.

Step 3 would be a horrendous idea for my OCD as it would be a faked replacement. Maybe there are higher res videos around, but they are not the one that was part of the original complete disk.

The whole idea of your script to me is a weird concept - I have always been an Album man, so I’d never have “Just a few tracks” picked up from somewhere, leaving a hole.

I’d also worry if someone is artificially assembling a playlist of tracks to match an album. I hope you don’t submit any AcoustIDs from that cobbled together set of files

We are all individually mad in our own ways - and I don’t need a script to remind me of that.

Picard may not support them fully today, but I am hoping you don’t give up on the video support @outsidecontext as there are a lot of mixed media disks like this around.

Don’t worry about this, I’m very much interested in this myself. I’m just not too sure about the videotools plugin. For now I’m working on a Matroska plugin with proper tagging capabilities. Maybe I will dumb down the videotools plugin then to provide only very basic functions for MPEG, MOV and AVI files (those are found frequently on enhanced CDs) so they can at least be loaded and renamed.