I already had this a couple of times. I did cluster, then lookup the album and I ended up with two tracks applied to the same position

although they have different track numbers. In fact the second track has the correct metadata. It is track 13, but a 13 track version of the album is apparently not to be found as a release on musicbrainz. I assume that is causing the trouble? 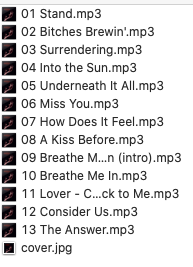 No problem - so I thought. But I don’t see how I can adjust the album structure.
I’ve set the total tracks to 13, but the track still won’t move to position 13.

How does one fix this?
Is this a user error? or a bug?

The problem is that there is no release of this album in the database with 13 tracks. The information that Picard downloaded shows only 12 tracks, so it won’t allow you to add a track. You will need to enter a new 13-track release into MusicBrainz and then link to that.

That’s clear. Now the question is whether I can use Picard to edit the album to then submit it. From your reply it sounds like I have to do that outside of Picard.

If you want to submit a new release using Picard, have a look at the “Add Cluster as Release” plugin which is availble at the Picard Plugins web page.