I’m just about to start adding poems and I think we will have to think about a few things.
First of all, we should try to avoid this: 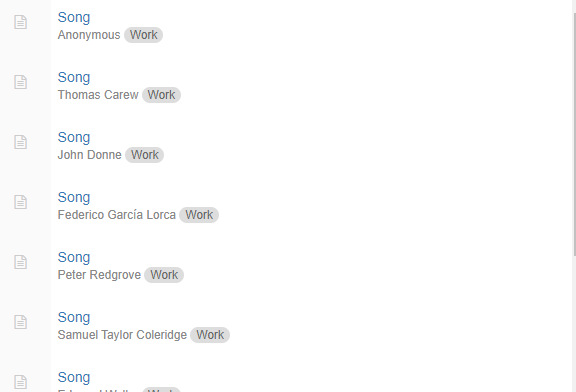 Many poems just have short titles or just a catagory as title : Ballad, Song, Sonet, Love, etc.
So the first line has to be added in all of these cases. Maybe we will have an extra field for this later, for first I will add the first line in square brackets […].

Many poems have subtitles or dedications below the titles (often in a different font). I will add these using round brackets “(To Agatha)” for first.

Many poems have no title at all. Do we want to use the first line as title then, or just add it with first line [Last night I dreamt of thee, sweet brain of books]?

There are many title variants especially when it comes to poems of earlier centuries. I think we should to try to find the earliest published version for the primary work. But that might be difficult sometimes, even if most of these old poems are very well documented.
We will have to deal with variants like this:

which leads to the question: Do we treat the Modern English version as translation or as an alias?

In many anthologies you find parts of large epic poems or abbreviated versions. How do we handle these fragments?

Personally, I don’t have a problem with a display list like your example because you can easily determine the correct poem by its author. It is only necessary to include a bit of the first line when someone wrote two poems with the same title (a couple of poems by William Blake spring to mind) as a method of disambiguation.

Unfortunately, at present on BB the author is not displayed alongside the title, so for the moment you could either add a bit of the first line (I would keep it to the minimum e.g. Hark the herald angels sing…) or a description “poem by William Blake”. If you go with the second option, then you could also add the first line of the poem to the Annotation section.

If the poem was originally published in a language that Modern English is derived from, then I would use the modern translated form. I think the number of people who can read West Saxon, Northumbrian, etc. is pretty limited these days.

Personally, I don’t have a problem with a display list like your example because you can easily determine the correct poem by its author.

You would have to know all poems of the poet to be sure. And the next editor? What should he do? He would have to check that,too. No you have to add the first line in all of these cases imo. There is no other good solution. All the more when you think of variants without title. Many titles like these short ones have been added later to poems that were originally released without title.

I just wonder how many poets wrote multiple poems with the same title? In my experience on Bookogs there were very few and I had a fair idea what was in the DB because every day I would check all the Works that had been generated in the previous 24 hours to make sure they were correct.

To use the poems of William Blake as an example, duplicate titles were disambiguated by including the year they were published: i.e. The Chimney Sweeper (1789) and The Chimney Sweeper (1794) plus the first line of each poem was added to the respective Notes section of the Works: https://books.discogs.com/credit/29150-william-blake?type=work

I just don’t think it is necessary to include the first line in the title of every poem when this could be included in the Annotation section.

However, I’m easy because I don’t think I will ever add poetry anthologies to the DB as they are too much work.

I just encountered another reason for adding the first line:

The poem “Der römische Brunnen” (The Roman Well) von Conrad Ferdinand Meyer has 7 different versions, Here are three of them:

You may imagine how helpful the first line in these cases (Not always of course) will be.

That relates to what I said about William Blake duplicate titles.

I just wonder how many poets wrote multiple poems with the same title?

There are many examples. And as I tried to explain before. It’s also important because you have many poems with changing titles. The first line stays the same.

And don’t forget: in many anthologies there are no explaining footnotes (no year, no version) just the poem. The first line is always helpful to find the correct poem you’re looking for.

As I previously stated that was not my experience on Bookogs, but to be fair that DB is in its infancy (and soon to die), and I certainly don’t claim to be an expert on poetry.

Maybe some other users on BB would like to add their thoughts on this subject.

I am not familiar with Conrad Ferdinand Meyer, but the example you gave appears to have different titles for each version (at least v4, v6, and v7 do). In English: The Fountain, The Beautiful Fountain, and The Roman Fountain.

Maybe some other users on BB would like to add their thoughts on this subject.

Hopefully, as you may have noticed, it’s an imortant topic for me. I’ve added thousand of poems to bookogs. And I will continue to do it here.
So I apoligize for maybe being a bit harsh. I tend to be a little impatient when it’s coming to things I’m interested in.

I didn’t mean for that comment to sound dismissive and I wasn’t upset by anything that you wrote. I don’t doubt you have more knowledge around this subject because mine is very limited.

I just think it would be a good idea to obtain some more feedback from the community.

One item for Editions and Works that BookBrainz is currently missing is a way to represent the subtitle.

Perhaps adding the first line as the subtitle could help solve those tricky situations where the title is not helpful?

That would completely solve this matter. Good one!

Perhaps adding the first line as the subtitle could help solve those tricky situations where the title is not helpful?

Yes, good idea! Then there are just a few cases left, where you have subtitles + first line

MARC bibliographic records formalize subtitle as “Remainder of title”, which in my mind justifies that it may be used by the wider bibliographic community to supplement the title, and not only for obvious subtitles (for example after a colon):
https://www.loc.gov/marc/bibliographic/bd245.html

For example when the title of a collection is composed of the titles of the works it contains:
Title Hamlet Remainder of title Romeo and Juliette ; Othello …
and also for differentiating purposes for a generic title:
Title Map of Nelson, Richmond, Motueka : Subtitle scale 1:20000.

Yes, good idea! Then there are just a few cases left, where you have subtitles + first line

If there is any way that we can solve an issue without using any possibly copyrighted material, then that should always prevail, considering all data entered in BB should be compliant with its CC0 license

Works in the public domain should be OK (taking care about translations, which might be more recent and not under the same licensing)

I don’t know why this didn’t occur to me earlier, but just add the opening line to the disambiguation section of the Work, and it will display similar to this: https://bookbrainz.org/work/1c3f79c8-acbd-4239-b714-e52defcb60d3

A subtitle section will be useful if you have a series of poems like these by Edgar Allan Poe which include a subtitle:

Damn they’re not subtitles, they’re opening lines, but I am sure this does occur.

I don’t know why this didn’t occur to me earlier, but just add the opening line to the disambiguation section of the Work

Yes, that was my very first idea to solve the problem, but then I thought that this place might be needed for author (similar poems) or versions (year etc.).

But maybe we don’t need this. If the author gets an automatic disamb. field as you suggested, the first line could go in the disamb. field and the versions to the notes.
Great, thx

“Suck it and see” is a saying in English. If it doesn’t work out we’ll go back to the drawing board.

I would like to see a subtitle field though as it would be very helpful. 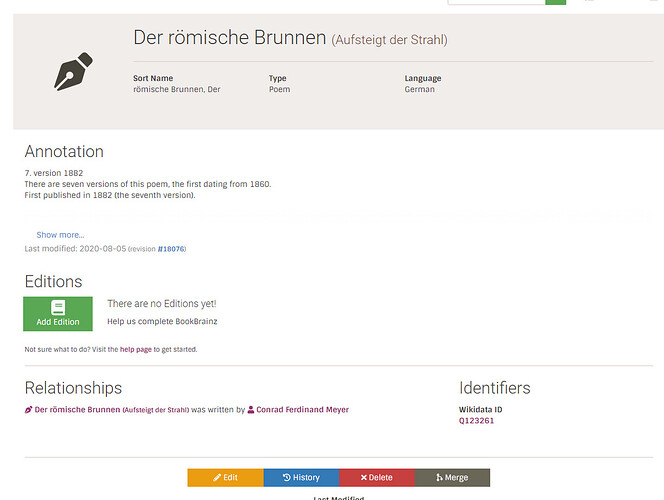 I would like to see a subtitle field though as it would be very helpful.