Hi, AcoustId currently has about 63M acoustids, MusicBrainz has about 25M recordings, so clearly there are many tracks in Acoustid that do not have a corresponding track in MusicBrainz

When Acoustids are submitted the basic metadata is stored with it, and when you lookup the Acoustid on the website you can see under the user submitted section columns for artist, title and album. What is not so apparent is that Acoustid also stores albumArtist, track no and year metadata as well, and track duration can be derived via the fingerprint.

As I have a combined MusicBrainz/Acoustid database I have been looking at this data and have been able to create Acoustid Albums that dont seem to be in MusicBrainz from the metadata.

The reports let you look at potentially missing albums, click on Show Tracks to see the tracks in the release and Import Release to seed the MusicBrainz release editor with the basic data, so I hope people find this useful. 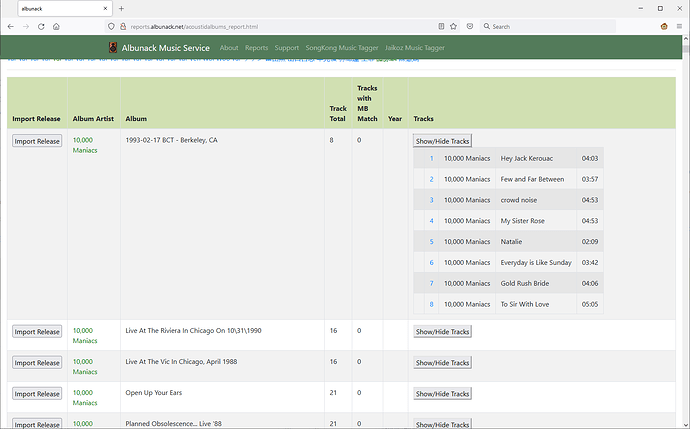 Note:I haven’t tackled multi disc albums yet, each disc will probably be listed as a separate album, and some albums will be listed as multiple times, the compare with MusicBrainz is based on text match so in many cases the album may alreay be in Musicbrainz with slightly different name so proceed with caution.

I’ve split into three reports, based on how many existing releases the artist has in MusicBrainz. So the first one is artists with more than 100 releases so I expect most people will recognize the majority in the list, and alot of the missing releases are live albums, and also many classical releases. This report is more likely than the other two to list albums that are already in MusicBrainz but just with a slightly different name.

The second is artists with between 2 and 100 releases, so these are smaller artists, and there are more missing original studio release but also plenty of live albums

The third is artists with one release or left, these are the really obscure artists, probably mainly self published releases.

Rebuilt with better matching against existing releases so that less likely to list albums already in the database, this is mostly a problem with the report for most popular artists.

Album Artist link takes you to the MusicBrainz Artist page for that artist, but only a link if that is the only artist with that case-insensitive name in MusicBrainz, because if there are multiple artists with same name we cant reliably identify the correct one. Similarly if you did Import Release it will use the Artist Mbid if can find unique name, but just enter name if cannot. 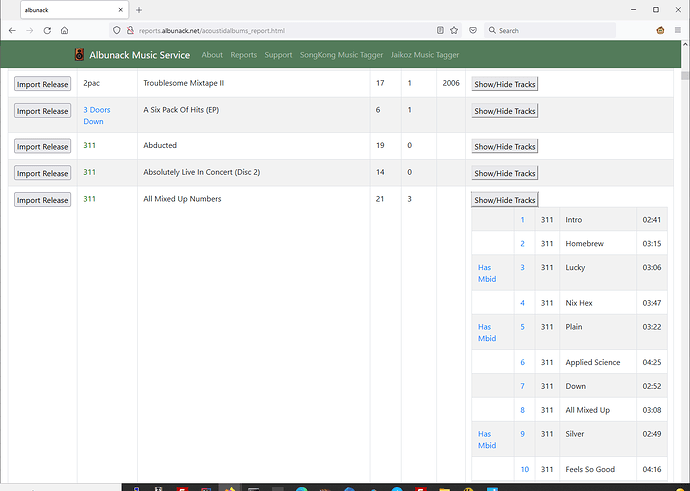 Made a few more changes: