A MusicBrainz or Picard or foobar2000 problem?

I need your help, I still try to find a way to fix the following problem:

If I try to rip the first CD for example foobar2000 find everything needed and works fine.

Any clue to fix this problem?

Sorry @no0ne, I am not really good at tagging support, but, do you mean you have trouble using foo_musicbrainz for foobar2000?

When you say rip, do you mean ripping the CD to you hard disk or do you mean adding the release to MusicBrainz online database?
Both your linked entities (release and release group) were added by you, indeed.

Things I notice when I look at these (I am a heavy tagger, but don’t use foobar2000 so not sure what it is doing different)

Firstly - Why is that 2 disk release still (unknown)? I suggest go into that and set the official\bootleg\psuedo-release status. Language. Script. Finish the entry off so it is the same quality as the single disk edition.

Next up - there is no discID attached to the one disk edition. So Picard will always go to the two disk edition for a match.

Third - I am confused as to what should be here in the Release Group. Are these two separate releases? One release is just a single CD, the other release is a 2 CD edition? 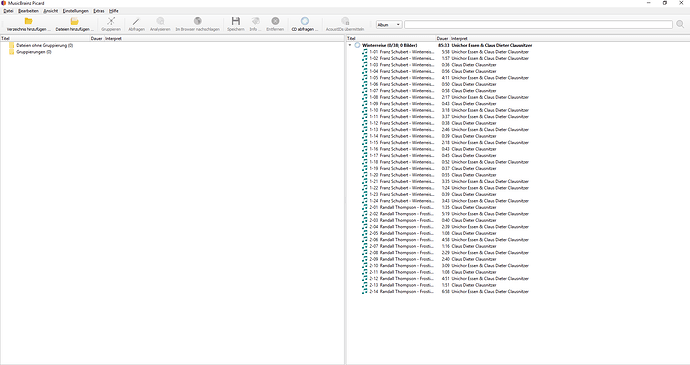 I think I damaged the musicbrainz database or I have to delete at least the entries. Or what do you think.

How many actual CDs do you have? Is that ONE disk or TWO disks?

As @jesus2099 states below, so far Picard seems to behave correctly here - matching that 14 track second CD to the 14 track CD2 of that two disk set.

What are we missing?

Picard chooses this link for CD2

What’s wrong with this?

I think this is expected behavior; when you lookup a CD, what Picard actually loads in that right pane is a release, including all of its associated media. So a lookup of either CD should give the same results (assuming there are correct disc IDs attached for both).

I don’t know why a lookup of CD1 is giving you only the tracks of CD1, though. That sounds as though Picard is matching the single-disc release, but as @IvanDobsky noted, there is no disc ID attached to that version.

I think a screenshot of what is going on when disc one is looked up may help.

Picard is working as expected. You are putting in CD2 of a two disc set. So Picard loads up the correct match for you. On the right hand side it correctly shows the whole two disc set.

Pop in CD1 and press the button and you’ll find the release will be the same on the right. Again correct behaviour as these two CDs both point to the same release.

When tagging the files, if you only have the files from CD2 then will match the bottom half of the right hand side. Lining up alongside tracks 2-01 to 2-14.

You have not damaged the database. It seems to all be working as expected. A multi-disc release will always bring all of the discs into Picard. This is a database of releases as you would find in the shop. It is not a database of individual CDs.

I will take look later.

First I don’t think we are talking about disc IDs here, since the single disc release currently does not even have a disc ID attached. The only time Picard would use the disc ID would be if you use “Lookup CD” with the respective CD inserted, and currently this should always load the 2 disc release.

So I assume you are instead loading the files and use Cluster -> Lookup. And this case the behavior you see is kind of expected. If you only lookup the files for disc 2 the only release Picard will find for this is the 2 disc release, so it will load this.

If you load the files for disc 1 Picard could fine both releases, but it somewhat makes sense that it comes up with the first one. Picard will always try to load the best fitting release.

In the end it doesn’t matter much. If you know you have the two disc release, just load that into Picard and drag and drop the files from disc 1 to it.