A discussion on a new UI of external links editor

No no your right, all.
On second thought, this really should be cleaned up
I just didn’t know about it yet, I never saw that fbclid, myself.

Although, if there’s a cleaning regimen that is applied to URLs regardless of type, I think the links editor should have a “don’t clean this URL” checkbox for those 0.1% corner cases where the thing that looks like a tracking parameter is actually essential to the URL.

without reading 102 posts to know what all was already said

Maybe something like this domain is used in position number 2

This won’t stop people from intentionally abusing the link system. But could make honest users aware of the fact that we don’t need a link to each individual page.

I think the links editor should have a “don’t clean this URL” checkbox for those 0.1% corner cases where the thing that looks like a tracking parameter is actually essential to the URL.

Yes we have a ticket for that, it’s just not implemented yet.

IIRC it won’t touch existing URLs unless they’re modified, both before and now.

IIRC it won’t touch existing URLs unless they’re modified, both before and now.

Definitely, in the version that existed 6 months ago, it would run the checker on all the existing URLs. Most of the time there was no effect, since for a URL that had been passed through the checker when it was first submitted, the checker would not suggest further changes on later runs. However, I do remember when the URL checker/updater was updated from preferring http: for bandcamp to preferring https: for bandcamp, I found that when I was editing artists that had bandcamp URLs, the updater would add a http:->https: edit of the bandcamp URL even if I had not touched it. (there may have eventually been a mass-edit to convert all the remaining ones)

Okay, it appears the new version of the links editor doesn’t mess with URLs that you didn’t touch when you edit other stuff about the artist.
As seen in

Hi! In theory, yes - but please add a style ticket requesting it, such as this example

Any vote for my request?

STYLE-1978 Add "jazzmusicarchives.com" to the "other Database Whitelist"

My favourite part of your new edit ability is that I can use the click on the links I paste in straight away.

BUT, sorry, I broke things

Have three links you don’t like. Delete all three links. Now try and add one back in again.

I found this as I was using the Clone Tool script and trying to make a new release.

Sorry, I can’t reproduce this. Could you provide more details? For example, the steps and the Clone Tool script?

I don’t think you need the clone script. Okay, the screenshots needed the script, but the issue is still there on a normal edit. Just with a normal edit there is a way of dealing with it.

Because the link I attempt to paste is technically still on the Release, but deleted in the GUI, I cannot paste it back in.

You can test on that live page above as no need to save anything. The error appears as you attempt to paste

Ah - I see a subtle difference here now I repeat it on a live page of a current Release. When I was working from the clone script I was therefore making a NEW Release. And that is how I got the second screen shot. I guess you did not expect to have a new release which already had links.

Install that. You find it on the main editing menu 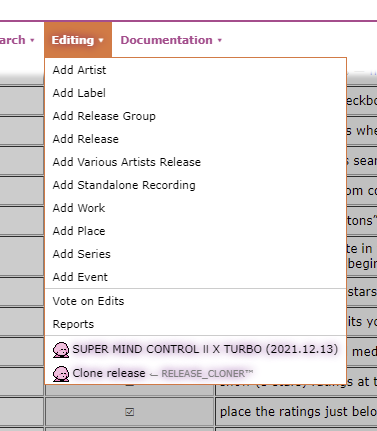 I now realise this is a side effect of a script coming in with links already in place. But this is a commonly used script as it is so darn useful.

This is actually a pre-existing bug, older than the new code

I have some code to fix it, IIRC, although I should check the status of it now that I’m back from my holidays.

This is actually a pre-existing bug, older than the new code

I can find holes in anything. Thanks for letting us know it can be ignored.

Now I see it is only on the clone, it isn’t much of an issue. Also it is easy to get around as I just deleted all the links, saved my edits, then came back and added the new one. Nothing lost.

This is not the script. It is just visible with the script as it is creating a New Release with pre-attached URLs. On New Releases deleting URLs makes them disappear from the page. Deleting URLs on an old Release keeps them in view. Compare the screenshots.

As @reosarevok notes, this is just the different GUI of a new or old Release. Not something for the script.