A cover that's not really a cover

Let me introduce you to Dreamcatcher:

Lovely ladies. Now this is MINX:

No problem, looks like two different groups, right? … Right up until you look at the relationships.

5/7 members of Dreamcatcher were originally in Minx.

Well Minx was given a Dal Shabet song called Love Shake as a title track to promote way back in 2015. It’s become almost a joke at this point among the fandom about “Minx sunbae-nim” and joking questions about if they’d “cover” Minx songs as Dreamcatcher.

And then it happened.

So. Obviously, this is a new recording of the song (stretching out 5 parts to 7)… but is it a cover if the entire original group is the one performing it (just with two additional people) just under a new name? The same question comes up with Beast/Highlight when they perform their old songs - is it really a cover if they (or the company in Dreamcatcher’s case) own the rights to the song and they’re the original performers?

Are the parts stretched by adding new music/lyrics or is the existing song just shared differently between the members? For the first case, it should be a new work anyway. For the second… I’d personally still set it as a cover, but I’m not sure everyone would

is it really a cover if (…) they’re the original performers?

Even if they perform in a different group, I would not use the cover attribute for this case.
It’s like a self-cover. Not a cover.

If any of the original members of the recording band record it, its not a cover. If this is not so, then there’s a lot to revisit including Eric Clapton/Cream and Taylor Swift!

At least, it’s my point of view: If any of the original performers or writers is re-recording a song, then it’s not a cover, IMO.

It would be more simple to not handle a cover attribute, manually, though.

Thanks for the advice everyone!

It’s still the original song, just different distributions of the song, with all of the second performers/singers re-recording it. (I say second, because it was released as Dal Shabet’s song on a b-side, then given to Minx as a title track.)

It was not clear to me in your first post with the lack of a third link.

Are you saying that this Love Shakes song was originally recorded by a band called Dal★Shabet?

In this case, both DREAMCATCHER and 밍스
(MINX) recordings are really covers.
There is nothing special case, here, eventually. 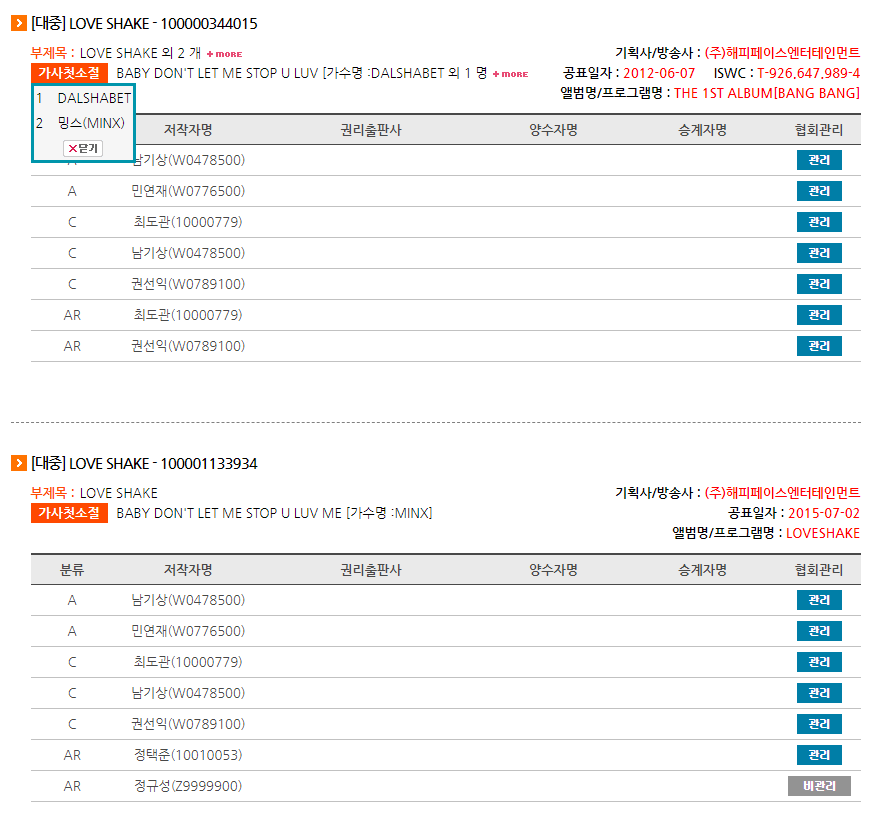 Fun times with multi-recorded songs! The first one (the one with the ISWC) says that both Dal Shabet and Minx used the song (though the Minx versions are only the instrumental/dj remix, not the promoted title track) and the second is… just Minx’s version?

See the song With a Little Help From My Friends, where the original Beatles recording is not necessarily more famous than the Joe Cocker’s cover version, albeit different interpretation, but still same work.

I guess It is often Cocker’s style that is later covered, but still same Beatles song, same MB work.

It doesn’t really matter if the original or the latter recording is an A or a B side, if it’s the 2nd or the 50th recording.

It’s always easier with the examples (I hope they are correct):

How should I deal with the different work IDs from KOMCA though? Just put both in on the song?

Well, yes.
I have seen several ISWC on 1 work and I have seen different several works sharing 1 JASRAC work code (because they group translations).
Everything is possible.

That would be interesting for Release group “Learning English: Lesson 1” by Die Toten Hosen - MusicBrainz