Rdswift Naming script is moving everything to [Classical] section

Using the excellent rdswift Naming script which does everything I need . . . . I have processed hundreds of files, but now I have a problem that just recently started on my past few albums, and I don’t know why:

Files are being moved to album folders located in [Classical] instead of the normal “~ J ~”, “~ P ~” folders, when they are not classical (say Folk, or Rock).

I’ve reinstalled Picard 2.5.6 and placed a fresh copy of the rdswift namescript, but it still happens!

Not even sure how to diagnose the issue!

I think I installed ‘‘Classical Extras’’ or some other plug-ins, but I turned them off and reinstalled Picard. Is there a way to step through the processing of the script to see what is happening?

Check to see if you have a tagging script that is setting a variable called _isClassical. If so, disable it and see if that takes care of the issue.

Thank you – I will check. For now, I’m having trouble with my MusicBrainz Picard hanging (freezing) when opening the “Options” (preferences) window so it looks like I have two problems to solve.

Hi Bob, thanks for your reply and I’m returning to this issue. (I had the same issue as before, and found my own posting … facepalm).

a user script must be enabled that sets the
_isClassical processing flag. This script can be a single line:

So, I do have this installed in my Settings, as shown: 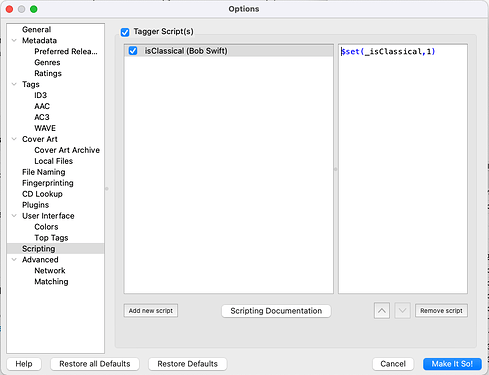 I checked, and yes, this mini-script is being run on ALL my files, when it’s enabled in the above ‘Options’ dialog box. I thought it would only be run when I chose to, like so:

Is that the expected behavior?

If yes, I guess I need to go to options and toggle that script to enabled/disabled depending on whether I want to operate on Classical music.

(Consequence: can’t load Classical and Non-Classical albums into the main Picard window at the same time.)

Is that correct? Thanks!

The easiest would be leave the isClassical (Bob Swift) script disabled in the Options settings, and then just run it as required using the “Run scripts” option for the selected releases (as you showed in your image above). That way, it would only be applied to the selected releases.

Oh, wait, is the behavior this:

The checkmark above, that I’ve marked #1, is to decide:

I thought the behavior of this checkmark was to decide:

This was not intuitive to me. Maybe the dialog box should say “RUN AUTOMATICALLY” above the checkmark. It looks like an enable/disable checkmark to me.

Got it. Thank you. I thought this checkmark was just to completely disable it, not to decide if it should be automatically run.

Thanks for all that you do for the community!

This was not intuitive to me. Maybe the dialog box should say “RUN AUTOMATICALLY” above the checkmark. It looks like an enable/disable checkmark to me.

Perhaps that would clarify it a bit, but the Scripting Options section of the documentation does say:

Thank you! I did not read the fine manual.

I’ll pull a ticket to request the words “Run Automatically” be added to the dialog box to help the next non-reader!