I ran a good portion of my library thru MB, I just realized (feat [artist]) was in the song titles so I found and installed the plugin that removes it. I thought I could just quick drop all the albums I’ve tagged with MB and have it fix things. Here’s what happening, I have a decent amount of Apple lossless files. When I drop an album in, it instantly pops up in the right column, but it lists all the songs as non-album tracks. I tried about 20 albums with the same results. I dropped 3 mp3 albums in and they came up as the albums, what I expected the m4a ones to do. Anyone have an idea what I can do here? I’m sitting with 700 non album tracks and I just want them to show up as albums. I looked at their ID3 tags and see all the MUSICBRAINZ stuff in there. So all I can come up with is it has something to do with them being M4A files.

From the 1st time I ran the albums thru MB till this issue, all I’ve changed was I added the plugin to remove (feat.) from the song titles.

Can you check whether those files have the MUSICBRAINZ_ALBUMID tag set? Without this and if they have only the MUSICBRAINZ_RECORDINGID set they will only load the recordings as non album tracks.

I just checked 3 album’s that come up non-album tracks, yes all have the MUSICBRAINZ_ALBUMID tag. They don’t have the RECORDINGID you mentioned though

Is it possible that you have the Ignore MBIDs when loading new files configuration option checked?

That’s very strange. Could you show a screenshot of how the files show up on the right pane and how the MusicBrainz tags look like in the metadata list at the bottom?

Here you go, MB just finished a scan for all the albums I’ve tagged, it looks like all the non-tracks are my M4A files. My mp3 albums are all showing up normally. One thing I’m noticing, I’m not seeing the albumid tag on the MB side. I opened the album in Tagscanner and MB right before I took this screen shot. And just to try something, I looked up one of the non-album tracks, pulled the album from MB and retagged it. When I drug it to MB again, non-album tracks for all of them.

I only have like 60 Apple Lossless albums so it’s not a huge deal if I have to manually import them again. But I would like to try and 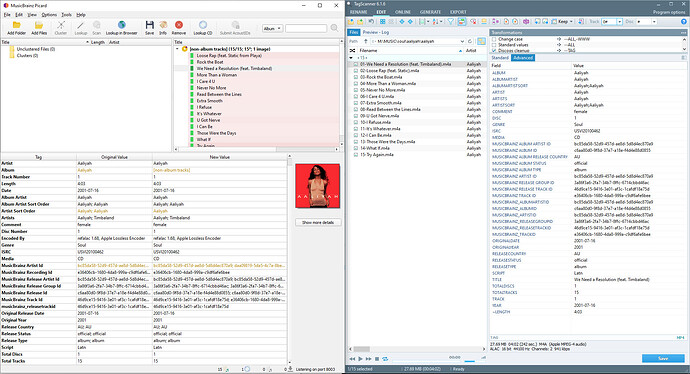 Thank you in advance, I really appreciate the help as I know I probably wouldn’t be able to figure this out on my own. I don’t see how this could matter, but I originally ripped the albums to FLAC and since have used Foobar2000 to convert them to M4A

So the problem is that in your files there are multiple values for the “MusicBrainz Release Id” tag. That for sure has its origin in the conversion from FLAC to MP4 using foobar2000.

Now you have files with both tags. According to its own mapping Picard reads the ----:com.apple.iTunes:MusicBrainz Album Id and interprets it as the musicbrainz_albumid. Then it reads ----:com.apple.iTunes:MUSICBRAINZ_ALBUMID, for Picard this is an unknown tag. But it reads those custom tags with just their name in a case insensitive manner, which means, this also turns out to be musicbrainz_albumid. And now you have two values.

The one issue causing Picard to fail loading now is that it does not expect multiple values for those tags when loading files, so it fails to load the proper release. I have prepared a fix for this for the next release, see:

The other issue is how Picard should handle clashes between custom tag names and its own tag mapping. We had a similar issue recently discussed here (for MP4 or ID3, I don’t remember, but the problem is similar). I have no good idea. Maybe Picard should just ignore custom tag names if they clash with own names.

Anyway, there is a workaround for your issue. It’s maybe a bit counter intuitive, but you should be able to delete the MB release ID tag from the files, then save them. Then load them again.

If my theory is correct this should result the files to load again with only a single value for the album ID (it will delete the official tag, but leave the custom one in the file). Downside is that with next tagging you will have duplicates again.

The cleaner solution would be to edit the tags, remove the duplicates values from the MBID tags, then save the files with “Clear existing tags” enabled. This would properly remove the custom tags. Downside here is that it would also delete other custom tags you might want to keep. So you have to add those to the “preserve these tags” list in options.

THANK YOOOOU! I used Tagscanner to remove all the custom MB tags MB adds and popped the albums back in MB and the albums showed up when I clustered and did a lookup. I saved them then dropped them in a 2nd time just check, showed up right away. Since you explained it I understand why it was doing it.