Picard thinks some early 1990s jungle techno sounds like M People's "How Can I Love You More?"

Why is the Scan feature getting this so wrong? 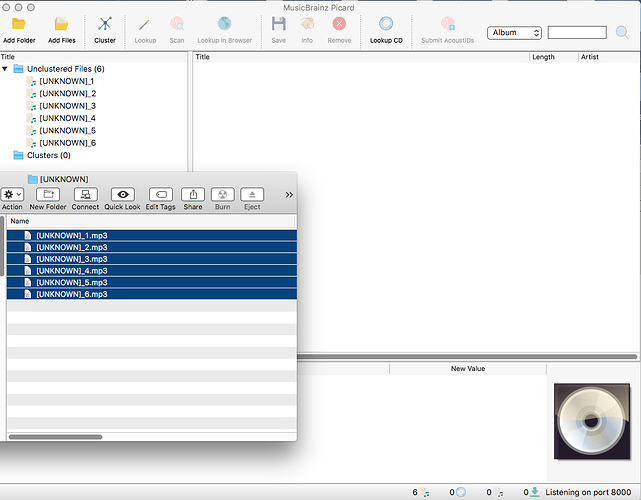 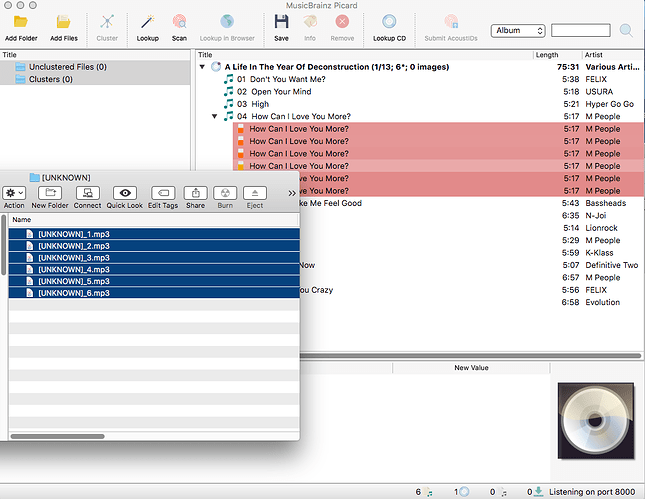 Thanks for explaining. Not a big deal but seemed strange since this is very different audio so it can’t be comparing fingerprints. Not sure how to attach MP3 here to show you. Are there any other tools you know of which could ID a track? Shazam and SoundHound rely only on submission via microphone which is no good in this instance.

Usually we can delete the duff items linked to AcoustID data. But the AcoustID server is currently being hit with a large hammer to make it behave. Once repaired bad data can be removed.

Bad data gets onto that server by sloppy taggers who upload it to the wrong artist. Likely the same people who try and tag 1000 files at a time. I have seen some VERY weird matches up ther, but notice it is only a single fingerprint in this example.

Better to make use of the GREEN Tagger Button in Musicbrainz. Do a Lookup in Browser on the track, then walk around the website to find the better matching album, then hit the TAGGER button to transfer that album back to Picard.

It is also very likely you have a track not in the AcoustID database, and if MusicBrainz has the album at all you’ll need to again use that tagger button to get it to Picard.

Thanks for the knowledge Ivan… Yes, I’ve stopped adding releases for artists where there are disambiguation issues myself as some artists in my library are just as new to me as to the database so if I haven’t had chance to listen to them yet there’s a chance that it might be a different person. As you may know, some artist entries on Deezer and Spotify have releases from more than one person with the same name on the same pages! I wonder who complains first, the artist or the consumer because I can imagine some folk music artists with the same name as full on American dubstep artists, for example, probably panic to know that their followers end up getting some noisy devil music.

Edit:
Unless there’s an option to “I don’t know” the disambiguation setting that I missed?

followers end up getting some noisy devil music.

Any automated system will have hiccups. Common names being a problem, but artists are fairly used to it and tend to change their names once they know. Music being worldwide make it a wider problem too. I don’t do Spotify so don’t know how much of a mess they have. I do see their date issues and know it is just a shop focused on profits, but I don’t want to go OT.

I treat something like AcoustID as a guide. Picard is asking me: “Is this your album? It seems a good match?” Most of the time the matches are good, but sometimes my music is just too obscure for it to be in the databases.

It is one reason I recoil in horror when I see someone throw thousands of tracks at Picard in one go and just hit Save assuming it will be accurate. That is the person who has now mistagged something that later gets uploaded and totally FUBAR’d AcoustID data.

Bad data gets onto that server by sloppy taggers who upload it to the wrong artist.

If I’m being generous I wouldn’t just blame the users - the ‘submit acoustID’ button is quite prominent in the Picard UI with no explanation of what it does/that it should be used with caution. I know you need to grab a key to enable it, but I’m sure most people just think that has something to do with ID’ing files and then they hammer the submit button as soon as it lights up

Long story short, as Ivan says AcoustID’s certainly aren’t foolproof, it’s quite easy to submit a few thousand incorrect ones with a click!

I think for this case it is rather the rest of the AcoustIDs that seem to be wrongly linked M People recording. The following AcoustIDs seem to be for some techno tracks:

The submitted metadata all indicates a different recording, but someone has linked them all to the same recording of How Can I Love You More? by M People. None of the three is linked to any other recording.

What I find interesting is that you have 6 files, but there are only 3 AcoustIDs. So either you have some duplicates or some of the tracks are similar enough that AcoustID considers them the same.

The proper way to fix this would be:

Unfortunately that requires AcoustID to accept submissions, I hope this will be fixed soon.

the ‘submit acoustID’ button is quite prominent in the Picard UI with no explanation of what it does/that it should be used with caution.

Yes, it really should show a summary and some explanation what it does. And probably an extra warning if some files have bee linked to tracks with questionable matches.

You are right of course

.
My example was just to illustrate how totally incorrect the AcoustID submissions sometimes can be; that AcoustID with incorrectly linked audiobook track by Eric Van Lustbader really has nothing to do with the techno tracks DerekFerric tried to find a match.

that AcoustID with incorrectly linked audiobook track by Eric Van Lustbader really has nothing to do with the techno tracks DerekFerric tried to find a match.

That’s exactly what I said

This specific mislinking is not the cause for the error.

But the other AcoustIDs I have linked have something to do with that. Here is the AcoustID for something probably called Burst Appendix by Techno Bros:

It is exclusively linked to How Can I Love You More?.

Similar for the two following, both again seem to be some techno tracks:

Ah yes, this is more likely the correct names for what I’ve got.
I’ve only ever pressed the Submit Acoustics button for stuff I’ve double checked after they’ve been tagged but I did wonder whether making that available would potentially pollute the database. Incidentally, I’ve noticed the Mixcloud auto-generation of tracklists for mixed sets sometimes gets things wrong and points to tracks their partners are selling which could cause disappointments.

Ah yes, this is more likely the correct names for what I’ve got.

I just don’t yet understand why you have 6 files, but there are only 3 potential AcoustIDs. Are some of the files very similar indeed? Would be interesting to see which tracks you actually have, and what is shown in the AcoustID tag after you hit Scan.

Now that AcoustID accepts submissions again I have disabled the link on these 3 fingerprints to the “How can I live you more?” recording. So if you scan now you should actually not get the wrong results anymore, if all our theories are correct.

I’m currently eliminating duplicates from multiple drives that I’m dumping in one folder on a 10TB drive so tend to eliminate duplicates afterwards so I can manually verify I’m not only deleting the smaller ones but also without the most necessary ID3 tags. For instance, if I have two 320s of the same 12" version of a song, I’ll keep the one from the maxi-single CD rather than from some compilation from Warner Bros or whatever, as I prefer knowing the original labels who released it than somebody who’s only licensed it years later.

I have the Basement Records one and the Orca 4AM ones but they were just 128 rips, probably from YouTube which had no embedded tags, hence they became untitled when I was running a tag to filename task on MP3Tag without first ensuring that the filename was converted to tags.
Also I was wondering if a way to eradicate bad/wrong fingerprints might be to have them ranked by similarity so eventually the one with the most identical submissions becomes the one used and others fall down the list? Not sure how to explain better than that, hopefully you get my gist.
PS I’m sorry to report a lot more wrong matches have come up since I posted this topic so I’m glad I’m checking everything before hitting Save! I guess others have experienced this if they have big libraries.

Btw I don’t think you’ve got anything to worry about.

If you care about correct matches, which you clearly do, then submit away after tagging. (Maybe not with these file with no tags though, depending on your accuracy there)

a lot more wrong matches have come up

Trying to ID a file with no existing tags, that is a lone song (e.g. not with it’s other album tracks), is a worst case scenario for Picard. Scan will do it’s best to save your butt, but yes, there will be mismatches. Are you unlinking the incorrect IDs? That is very helpful for later users

one with the most identical submissions

Unfortunately an incorrect fingerprint match early on can lead to a bunch more of that fingerprint being submitted, as you can imagine. So the number of submissions doesn’t help that much.

Sometimes there’s another problem at play, like a track has been mis-named on a release. Now you have everyone tagging ‘song b’ as ‘song a’ on that release. It’s not a well known song so nobody really notices, until suddenly you are tagging a different release, and scan matches ‘song b’ to the differently titled ‘song a’ - and lots of fingerprints for both! And then you really gotta dig to untangle the mess…

Also I was wondering if a way to eradicate bad/wrong fingerprints might be to have them ranked by similarity so eventually the one with the most identical submissions becomes the one used and others fall down the list?

gotta dig to untangle the mess

I’ll see if I can unlink wrong stuff in the future but right now I’m still trying to grasp submitting fingerprints to a compilation album which i’ve finally just added. Hoping this will all get easier. As a new editor the first thing that strikes me is it’s not easy to see which fields are mandatory. To know that from the beginning would maybe help newcomers not feel overwhelmed by the potential research needed.