How to credit releases from a local music school?

I have a few releases from a local music school that give an overview of its repertoire (mostly classical music and jazz). The recordings were done either by single students or various ensembles/orchestras/bands of the school.

What option (if any) would you choose for the following:

(In the last case, I intend to add every performer as an artist. Even if insignificant, they are now part of music history. I mean, except for the choir of 7‐year‐olds, the musicianship is probably (definitely) higher than for many “professional” artists)

What would you do?

I’d probably name the artist as “LocalMusicSchool”. That is the “group”, and the members have changed over the years. The school is the common thread that they performed under.

I would credit most of the musicians where possible as individual performers. At the time they were part of the group and performing under the group\school name. If was Fred playing Triangle in 2005 and that is especially interesting if he went on to be part of famous band.

Even if Fred never performed again, he was still an Artist on that day.

Project names seem more like a Release title to me. Or as an alias for the school “artist”. (I’d have to see the flyers or covers)

The “one off projects” are still part of the school, and maybe are aliases. If they performed many times as a group, you do have an option to make a “sub-group” relationship.

Or if that group then went off on their own, then there are other relationships that could be of use in here: 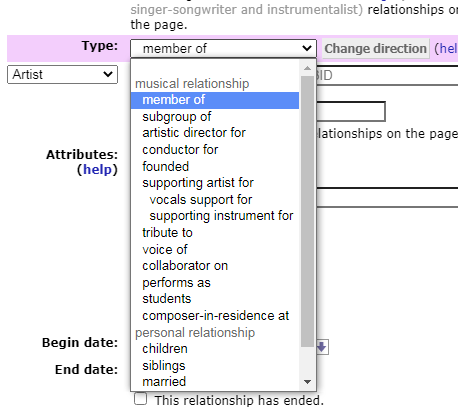 If a famous group started within the school, and they split away on their own, then I’d be crediting them by name on that Release.

I would have thought classical editors can give a more structured example.

As far as performer relationships, I think that is only limited by how much energy you want to put into it. I don’t always create an artist entry for the person credited with additional backing vocals on track 16, but I would never discourage anyone else from doing so.

I would suggest though that you add disambiguation comments to any newly created artists if their names are at all common.

A trick worth doing on a large project like this will be is to make plenty of use of the Annotation field. Initially dropping a lot of the credit texts into there first while energy and time is found to add every individual one by one. I am one of those people who do enjoy getting into those extreme details so I understand the satisfaction in a mission like this.

Okay, thanks a lot for the answers!