How to add performers to a recording?

So I found this recording, and I want to add the performers that play on the recording.

This is the Musicbrainz page for the recording:

And this is a page that has the content (the musicians) I would like to add to the recording.

"Birdland" is a jazz/pop piece written by Joe Zawinul of the band Weather Report as a tribute to the Birdland nightclub in New York City, which appeared on the band's 1977 album Heavy Weather. The Manhattan Transfer won a Grammy Award with their 1979 version of the song, which had lyrics by Jon Hendricks. Quincy Jones won two Grammy Awards for the version of the piece he included on his 1989 album Back on the Block. "Birdland" marked the peak of Weather Report's commercial career with the releas...

That should be simple no?

But, I have by now clicked on pretty much every link, icon, tab, pixel on the Musicbrainz page for the recording, but I can find nothing that leads me to a page where I can enter/edit the performers for that recording.

Very frustrating, what am I missing here? 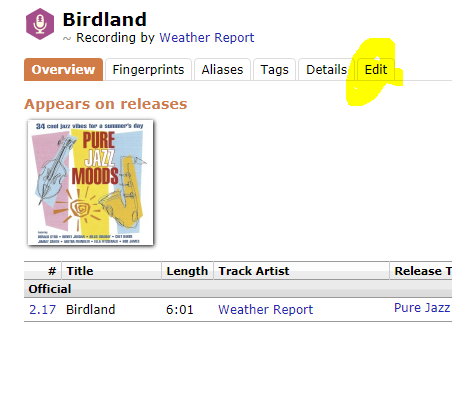 Now use the ADD RELATIONSHIPS on that page 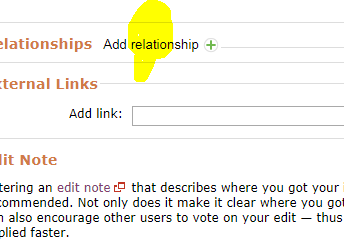 Select ARTIST and now you can add the performers, and select their instruments.

I clicked that too, but it opens a panel that only allows to specify some technical recording details: 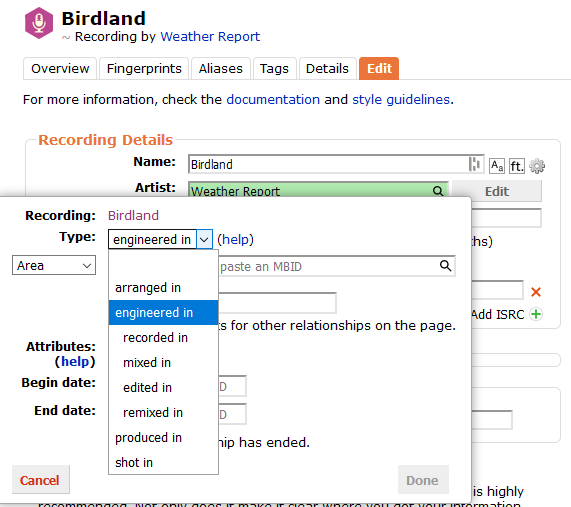 Click on the box that says AREA and change to ARTIST 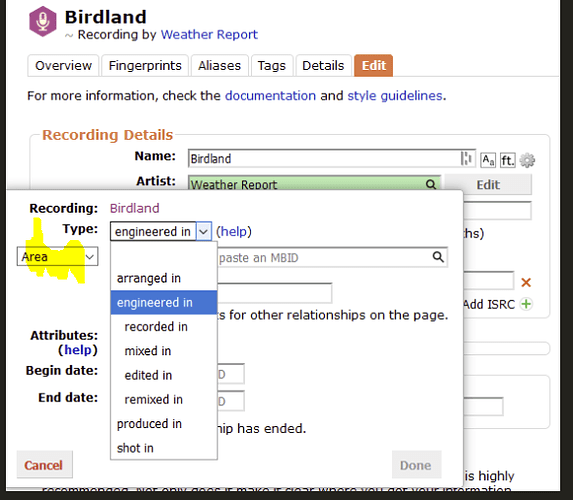 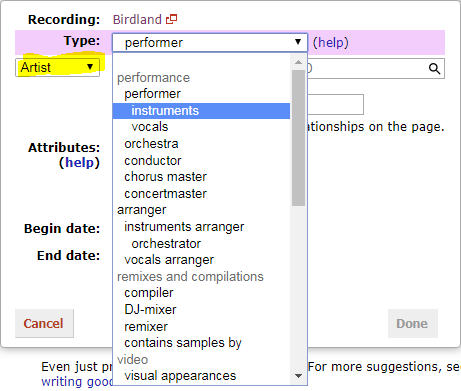 A strange user interface design though.
So the primary option (area/artist etc.) is located beneath the secondary option.

Same as the weird search behaviour I mentioned elsewhere, this I have also not run into before with other software.

It seems I will have to learn a completely new search / user interface language to become comfortable here.

Anyway, the responses and support on this forum seems top-notch, so thanks again, and I will not give up just yet…

It seems I will have to learn a completely new search / user interface language to become comfortable here.

The interface is certainly unique, but it has to cover a LOT of areas at the same time. I think there was a plan to redesign it but I believe the programmer went totally insane and ran away to the desert never to be seen again.

Ask questions, and we’ll try and help. Making mistakes is the best way to learn. There is some documentation at the top of the editing page, but sometimes that can just confuse things more.

I’ll see if I can become a better CrazyUser of CrazyBrainz then.

Have you see how much data there is here? And how many links? And all the little relationships? You have to be crazy to enter all of that in by hand. These is some extreme dedication from many editors over the years. This place can become an obsession.

After a while you better understand the unusual interface. And then you start to add userscripts to make it even more powerful. Plenty of editors don’t like the GUI and have upgraded it to make editing faster and more efficient. Especially bulk changes. It is these userscripts that mean some of my little screen-snips may look slightly different to yours. But we don’t want to confuse you too much yet.

With your initial question it may help to also see the Edit Release Relationships page. That way you have something to compare your edits to. 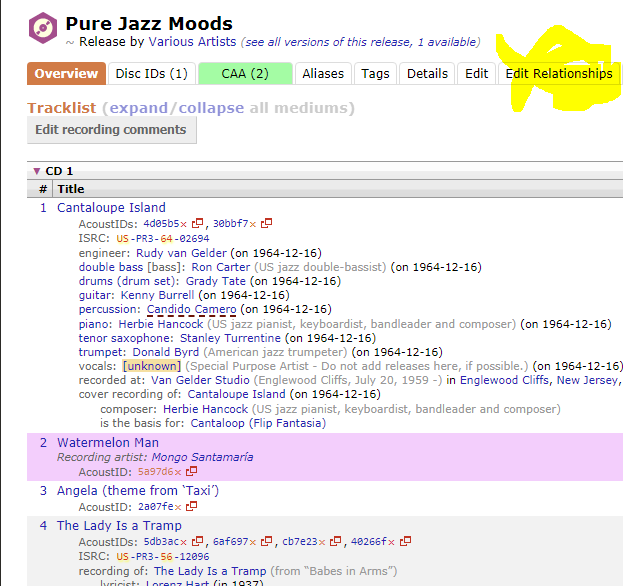 If you click on this Edit Relationships it puts up a combined page. This is the best page to have on hand if you are working from an actual CD booklet. On the right are the Works (or the written sheet music). This is where the writer credits go. On the left you see the Recordings as found on this CD. This is where your instruments go.

You picked a slightly tough example as it is a Various Artists compilation. So that page is a little scrappy. It is good to see what kind of information goes where.