How do you file your classical music? Why?

I have a terrible dilemma. When it comes to organizing my classical music files, I wonder if I should register them by opus or should I register them for support. I will explain:

Using the album as a classification unit is valid for modern artists, since they usually publish their work on these media (be it CD, vinyl, sacd, etc. etc.). This is easy because usually the composer is the same person as the director and the interpreter. On the other hand, with the classical authors the subject is more complicated than we would like because although the composer is invariable for each theme (I do not take into account the arrangers), everything else is changeable: the director, the orchestra or the interpreter can change.

To curl more the curl, the same orchestra with the same director can have different recordings of the same theme. For example: the movement “Canon” of “Canon and Gigue in D major for 3 Violins and Basso Continuous” of Pachelbel appears in the vinyl LP “Adagio Karajan” edited by DG in 1973. The interpretation was given by the Berliner Philarmoniken directed by Herbert von Karajan, and the recording was made at the Französische Kirche of St. Moritz, Graubünden, Switzerland on 1969-08-05. This same theme appears on the CD “Albinoni: Adagio / Pachelbel: Canon”, also edited by DG but in 1984. It was performed by the same orchestra and directed by the same director, but eleven years later and this time in Berlin. Same theme, same director, same orchestra … different sound. It is worth having both recordings, but

How do we catalog them in the directory structure of our disk?

Or would it be better to archive them with this structure, with one entry for each disk?

The real experts will be along soon, but it is worth looking at how Classical Records are added to MusicBrainz to get a quick picture of how MB sees Classical.

These are a few pages from the “Style Guide”. Instructions on how users are supposed to add their Classical Releases to the MB database. This will be where Picard gets its data from, so will help if you build your layout in a similar way.

I haven’t got to my Classical disks for cataloguing yet, so not the best person to help…

Another tip: See that “classical” tag in the title of the thread? 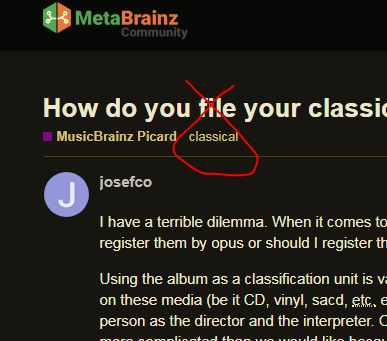 Go click on it and you’ll find other Classic posts. Some of those will certainly help.