Have you ever heard of Jaxsta?

Hello,
Just run this afternoon on an article from last 15th of march, it’s about a deal between Jaxsta and Warner Music Group and how this will work. I let you read it if your are interested, but that Jaxsta description as “a massive database of official music credits” who mostly intrigued me. A short video also explain more about.
For the moment I didn’t find any concrete information bu according to the Facebook about section, a Jaxsta Music Database API is planned and probably soon as “the Jaxsta platform will launch in the first half of 2019”.

@Fabe56, Thanks for this post, it is indeed intriguing.

I like how the comments are disabled on their videos.

BTW, that article also links to a DDEX video, that seems interesting (despite them trying to be funny with their very lousy jokes making far‐fetched parallel between metadata and sex — I wonder if they purposely included Herbie Han(cock) in the video for that matter)!

For the moment I didn’t find any concrete information bu according to the Facebook about section , a Jaxsta Music Database API is planned and probably soon as “the Jaxsta platform will launch in the first half of 2019”.

Impressive while browsing top major artists¹. Much less so when I tried to check out some lesser known ones². At this point I’d say their database is largely empty.

Hopefully their API will be part of the public release and not behind the pro paywall.

They have managed to find credits for a West African release or two by the T.P. OK Jazz Band and Orchestra Poly Rhythmo. While missing … well I’ll guess at well over 300 recordings in total.

And Soviet era conductor Gennadi Rozhdestvensky seems to have had an accident with a StarTrek matter transporter, been split into >9 artists, but been credited with <100 recordings. Not much to show for a lifetimes work that was used to demonstrate the cultural superiority of Soviet Communist classical music over decadent capitalist counter-revolutionary bourgeois classical music.

I ran the following through the Google Translator setting it to translate from “Marketing Spin” to “Reality”;
access to the credits of more than 80% of global music releases

Hopefully their API will be part of the public release and not behind the pro paywall.

For the moment, API page don’t provide a lot of information but the first sentence leaves a big innuendo: “The Jaxsta Commercial API is being developed to offer bespoke web-services based versions of the data in the Jaxsta database - an invaluable tool companies can use to enhance their existing content”.

I am thinking:
How might MB be able to position itself as a low cost competitor of Jx in the eyes of companies who want what they think Jx offers?

How might MB be able to position itself as a low cost competitor of Jx in the eyes of companies who want what they think Jx offers?

I think we’re already in a decent position:
https://metabrainz.org/supporters

There’s the caveat that Jaxsta seems to claim correctness (which is important for royalty payments!) while MetaBrainz specifically says that our data may be inaccurate:

Without limiting any other provisions of these T&Cs, we and our licensors will not in any way be liable to you for any kind of loss or damage incurred as a result of your use of the Service including, without limitation, any viruses or other malicious software that may affect you while using the Service or for any faults, failures or interruptions or for the accuracy, timeliness, completeness, security or reliability of any communications (including any transactions) made using the Service.

Cool to have another site to crib notes from!
Not sure how our MB’s UI design is going, but check out that great filter: 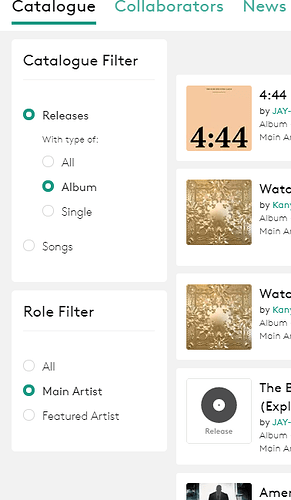 This may be more of a direct competitor to Discogs, since MB’s user and contributor base is already pretty niche.

I wonder what their ‘hook’ is. Discogs has its marketplace, MB has its plug-in-ability - maybe Jaxsta will just make enough $ to pay people to enter data.

Some news, I notice today three new properties for WD are available since the last 23rd of July:

I guess that’s mean the interaction between Jaxsta and MB could be easier?

And the album covers next to the text.

Round here the words being whispered are “sniks htiw scihparg”.

I had dinner with an employee of jaxsta today.
They are working on getting all the credits right from the poor quality data the rights societies and music provide.

COVID-19 has been devastating for music industry professionals. To help, we’re making Jaxsta Pro FREE for 2020. Claim your Jaxsta Profile now to promote you and your work. Sign up for Jaxsta Pro FREE now, https://t.co/asWshjlhAe
3 Likes
InvisibleMan78 April 24, 2020, 8:12am #17

Because I have never heard of Jaxsta before:

The evolution of digital music means we’re losing the CD booklet and album ‘jacket’, and along with them the opportunity to discover and recognize the people behind the music. Jaxsta rectifies this. We are the official credit roll for the lost ‘Jacket Stars’ or ‘Jaxstas’ of the music industry.

How is Jaxsta different to other music sites?

We do not accept crowd-sourced information. Jaxsta delivers official data sourced exclusively and directly from the custodians of that data, such as major and independent record labels, publishers, royalty agencies and industry associations across the globe.

Jaxsta looks shit to me, I looked for Crass and almost all the info for Feeding of the 5000 release is wrong, wrong release date, wrong label, wrong distributor, wrong producer. So I don’t know where they get their info from, for Crass it’s not from the band, label or distributor and all the correct info is widely available, so I can’t see how they could get it so wrong