Go to the bottom of the page and check the Copy all track titles to associated recordings. checkbox

What @IvanDobsky wants to do is the inverse of this. He wants to copy recording titles to the track ones.

Ah ok I got it wrong.

Then what I use in your case here usually is the search and replace tool from TRACKLIST_TOOLS from SUPER TURBO script.

@paulakreuzer and @Freso have understood my copying direction here. I want to bring those corrected recording titles back across to the tracklist. I often make use of the checkboxes @jesus2099 points to when going the other direction. I was hoping there was a simple way of doing this in reverse.

I have used the track parser before, but it is not really going to be feasible with so many tracks on so many disks. It depends how easy it will be to lift a “clean” set of track names. I’ll add it to my TODO list of experiments.

As to SUPER TURBO Search and Replace - it has already been handy to use elsewhere, but just too much work here. Trying to get all 200+ of those speechmarks done would drive me up the wall.

I want to bring those corrected recording titles back across to the tracklist .

I wished for this feature more than once

I think we rely too much on userscripts to enhance MB, and since redesign is on the work it would perhaps make sense to integrate such feature (see Your favourite User Scripts for MusicBrainz?! (so that they can be used while redesigning!)).

Yep - agree with you Zas. Though the language of MB is a complex barrier for noob editors stuff like this needs to be slightly hidden to avoid total disasters. At least when Scripts are installed and activated that is a chosen step by the user.

On the current GUI there are these two boxes:

The language here is confusing already. When I am doing updates to a track list I will often make use of these. But what does “all track titles to associated recordings” actually mean? Does that mean it is only relevant to this page and ticks all the boxes for me on the page to copy from track to recording.

OR is it also going to sort out ALL of the associated recordings in one go?

It is this latter reading of it that was leading me to hope I could some how use these to push the “good” recording names to all linked versions of the recordings. A one to all copy if that makes sense?

I would think that if the recordings are correct than there would exist a tracklist somewhere with those correct names. Perhaps you could find it and use copy and paste with the track parser.

As you say, this feature needs to be “hidden” so new or inexperienced editors don’t mess up the data too much. Also, we already have a ticket for that: https://tickets.metabrainz.org/browse/MBS-2970 - it would be great to be able to propagate the recording change in one release and in multiple or even all releases (e.g. fixing a typo).

Trying to get all 200+ of those speechmarks done would drive me up the wall.

You can try this:
Shift+click the Search→replace button so that it applies on all mediums.
Then use the regular expression Search: /"([^"]+)"/g — Replace: “$1”.
But the simplest is Billy’s advice:

I would think that if the recordings are correct than there would exist a tracklist somewhere with those correct names. Perhaps you could find it and use copy and paste with the track parser.

Actually, the ticket that I posted only talks about recording -> track, not about all recordings on release -> all tracks on all releases so we might need another ticket or have this to be a part of MBS-2970

@Billy_Yank and @jesus2099 the example I am working on here is extreme. We are talking huge “audio drama” set of disks. Twenty Five CDs with average 20 tracks on each disk. Many of those tracks are multiple parts so multiple speechmarks opening and closing.

The example above is part of that larger box set. So we also have this as separate releases. And that is where the hiccups start as some of those separate releases have had the speechmarks done, but others haven’t.

Yeah, I can see how with search and replace and messing with various rules I can try and catch the speechmarks - but this is complicated by the Unicode need of different quotes for opening and closing. And then as we have quotes in quotes (see track six above) there is going to be quite a weird rule that needs constructing.

Copy and Paste will be similarly messy as I’ll need to have a staging post in Notepad++ where I clean up anything I move. Though that is going to be the least complex to do I think.

I’ll work something out. I came here hoping for a “magic button” as I assumed I wasn’t the only person who has seen this occur. There must be many places where a recording appears on multiple releases. I’ve often had to manually go through multiple copies of the same to propagate a correction back up from the recording to all the separate releases.

@culinko Reading your ticket I think you get my point exactly. As someone else said on the ticket, it is something that needs to be visual and show you all the tracks about to be changed. And it must get hidden behind some kind of advanced\expert mode as that could cause utter chaos for new users!

Propagating corrections like this could be made simpler. And if it was simpler, I’d do even more of them.

A simple image to show the issue clearly: 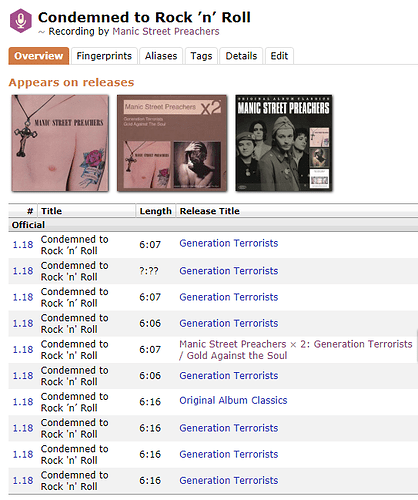 The Recording has been corrected to use the right apostrophes.

According to your image and using the appropriate MB terminology:
The recording name is correct as well as 3 track names.
Remain 7 track names with typewriter apostrophes.
So what you would like is “Update all tracks” (from recording).

LOL - and there was me trying to carefully get the terminology right, and missed that last one.

(And yes - I knew the counts were wrong. They are more wronger now as I’ve been updating some…)

For those who came across some releases that would completely freeze their browser, an INLINE STUFF performance bug has been fixed today, and it should no longer happen.
Thanks to @Mitch2323 for suggesting an important clue on how to fix this old bug:

Daft question - do these scripts auto-update (I am using ViolentMonkey)?

The Monkey said “Yes, all is updated”. I can see the new version details at the top of he script source.

Quick question @jesus2099 about the AcoustIDs that INLINE STUFF puts on screen. Will they have an effect on this: Adding rate limiting to the AcousticBrainz API

When I open up a five CD set with 20 tracks on each disk that is at least 100 AcoustID items being pulled from somewhere. Just curious if this is coming via that API? I may toggle these off on my screen if they are as I rarely look at those numbers or interact with them.

AcoustID is not the same as AcousticBrainz. If you are specifically asking about AcoustID, then there’s no problem because it’s unrelated.