As I understand Artist credits for classical releases should have composers listed first - all good so far. However should they have an English translation added?

This is particularly relevant with composers like Rachmaninov / Rachmaninov.

You want the credits for the release to appear as they do on the release artwork. The Musicbrainz record for the artist (composer/performer/band/etc.) is generally created using the artist’s own language, but on a release, you can use the name as it appears on the album as the “as credited” name:

so the release will be displayed as:

which matches what appears on the album cover: 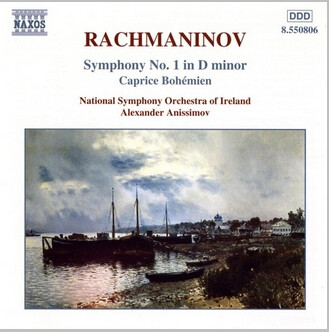 There is only one MB record for any artist, but there can be any number of aliases, which allows you to search, sort, etc., in your own language. If you search for the artist “Rachmaninov,” what you’ll find is “Сергей Васильевич Рахманинов.” But if you look at the Aliases tab, you’ll see a long list of variations of the name, including the English, in all its various spellings. 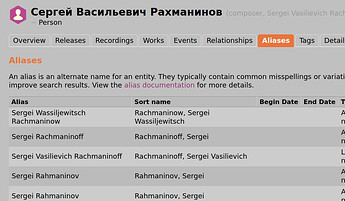 Thanks … I was a bit confused if artists should be anglicised so thank you for confirmation.

I actually discovered why I was having problems with one release - Valery Gergiev’s entry (Cyrillic alphabet) had been translated into English as Rachmaninov rather than Rachmaninov’s entry!

I can see how that would be a problem!