About the concept of genders 2.0

But pronouns and gender identities are completely different things. We don’t need to store preferred pronouns in the database because there is no automatically generated text about the artist anywhere like: “[Artist] was born in [location]. [Pronoun] is/are active since [year].”

Or do you expect some people would still say “I’m not male, female, nor non-binary/genderqueer, I’m something else entirely!” and expect yet another option?

Would “gender non-conforming” be a better catch-all?

As long as gender is a fixed list, MB is making decisions about which identities are significant (enough to be on the list), which ones are synonymous, which are meaningful etc.

I agree that MB shouldn’t be involved in that sort of decision (which, of course, is currently the case), which is why I voted for “Free-form writing (e.g. tags)”.

Would “gender non-conforming” be a better catch-all?

To me gender non-conforming means you identify with one gender (usually the one the doctors assigned to you at birth), but don’t stick to many of the “rules” society puts on you regarding how someone with that gender should look and behave.

Gender variance, or gender nonconformity, is behavior or gender expression by an individual that does not match masculine or feminine gender norms. People who exhibit gender variance may be called gender variant, gender non-conforming, gender diverse, gender atypical or genderqueer, and may be transgender or otherwise variant in their gender identity. In the case of transgender people, they may be perceived, or perceive themselves as, gender nonconforming before transitioning, but might not be Th...

So it’s not necessarily related to gender identity.

I still don’t understand why MB is aiming to make up a new list. MB should be driving to a standard so that other users of the data can work within a standard. Any list made up by a single person here at MB will have bias in it that will come back to bite at a later time.

What happened to the suggestions about Wikidata’s gender list? I know I have seen a few suggestions here pointing to officially agreed lists. If MB pushes to that standard then won’t that also help the standard to be taken up by other websites and databases too?

If every database makes up their own lists that just leads to more of a mess \ confusion \ argument.

Yes, we should have a list of choices. But importantly MB should not be setting the contents of that list.

Rename gender to sex and use tags for transgender, etc.

This suggestion would help biologist to get less confused

I can tell you.
Some explanation

After reading both threads, this proposal seems effective at representing multiple gender identities in MB; I agree the best approach is a pre-defined list of gender identities with an optional disambiguation free-form text box.

This discussion is important. I agree by offering a gender field in MusicBrainz, it creates space for this topic. When thinking of gender, it should be thought of as fluid and changing like culture. So, building in ways to capture the fluidity of that data is useful. Since MusicBrainz captures data about music, people, and art, consider what these represent of culture. Music is a component of human culture. Labels for artists already exist as their birthplace or current area of residence. Nationality and citizenship are a part of human culture. In the same vein, gender is part of human culture. Over time, culture and perspectives change. To consider the nationality example, the break-up of Yugoslavia into several nations is a change captured in MB already. Gender can also be this way. It is challenging because a gender binary is deeply-rooted in many societies and thus our information systems. However, multiple gender identities won’t go away in 1, 5, or 15 years. If discussion does not happen today, then it will in the future. Capturing accurate data and avoiding a bias that leaves some people out of the documented music history are important considerations.

Thus, I believe the proposal of a pre-defined list with disambiguation box is effective at standardizing gender data to a limited extent, and offering more flexibility where needed. An externally-curated list for gender options could be used initially. I believe this is a good compromise to create a standardization mechanism while also permitting infinite options.

To go a step further, the gender disambiguation could work similarly to genres created from tags. If a disambiguation is used frequently, it could be included in the list. Or be distinguished in another way.

However, this approach does not address the open-ended questions of what happens if an artist changes gender identity after their career starts.

If questioning whether this data is valuable to collect at all, I believe there is value. Gender identity is an interesting social characteristic of music. Interesting areas could be explored by MB gender data in relation to tags, artists, and more. To erase gender is to erase this possible social exploration. Additionally, this metric can be a useful metric of diversity and ways to improve data coverage. If Wikipedia leads a Wiki Women in Red group to improve coverage of women on Wikipedia, a similar campaign could be sustained by knowing this data: 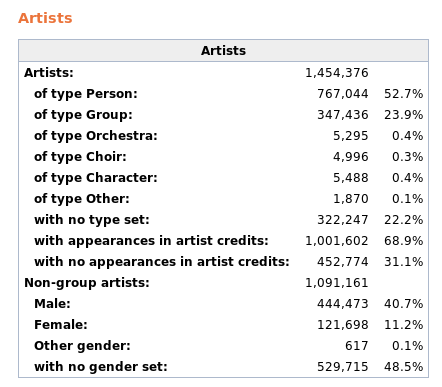 All else aside, I think gender is interesting to capture because for some artists, gender is a defining component of their recording identity and themes in their music.

Adopting a better standard for capturing gender is important, but it should allow for basic standardization of data with flexibility to grow and adapt in the future. I think this proposal captures that.

@jflory This is an excellent comment, thank you. I especially like how you emphasize how both gender and music are important parts of our culture and both are connected. This shows how the discussion about gender in MB is actually relevant and has value in itself. I fully agree with you on what you have written.

hey! i’ve submitted a proposal for a pronoun attribute, if you’re interested:

hello, everyone. i’m not very active here, but i wanted to propose this! MB currently has a gender field for artists (other/female/male), which can be set for individuals only. since gender and pronouns don’t always align, i think we could use a field for each artist’s primary pronouns. since the list of neopronouns can be extensive, and for internationalizations we’d have to discuss translations of these, i initially propose this with the following general structure: singular neutral femal…

For now, I added non-binary as an option. Sure, it’s fairly generic, but it’s still less othering than literally “other”.

the guidelines should be updated accordingly.

I did completely forget that our guidelines had a gender section (and also missed your comment, sorry!). I made a tentative change now, but I’d like for people who know more about this than me to check it and make sure it makes sense - we can amend it further if needed.

I’m also deprecating “other” since it feels “non-binary” and “not available” cover the lot, but I won’t remove it yet - some use cases I didn’t think of might come up either with discussion here or while trying to clean up the existing “other” entries.

The new text for the guideline:

The “non-binary” gender is not intended for use with entities for which the concept of gender is illogical, such as companies. For those, use “Not applicable”.

The “other” gender option is deprecated and should not be used.

Sorry to revive this old thread, but what should we do in the case of drag queens? Should we use the gender they identify as or the gender of the character they perform as? Those are usually female, but there are gender-bending drag queens as well as drag kings.

Should we use the gender they identify as or the gender of the character they perform as?

I would expect the drag queen artist would be in the gender of the performance (whether that’s “character” or “person” I guess is an open question?), and if you have a legal name artist (because the artist also performs out of drag for example) that’d be the gender of the performer. But I’m not really that familiar with the drag scene, so if people who are disagree then we can revisit

Everything sounds good to me, but to add some more ‘meat’ (wahey!) to the discussion:

I would say a drag performance/album is in the gender of the drag character.

Usually this is made easy by the drag character having some outrageous name, which the performer only really uses when in character. So the MB ‘performs as’ (or whatever the character version of that relationship is) relationship will work perfectly.

There’s exceptions, RuPaul probably being the most well known (uses the same name in and out of drag… but they sure as heck understand their ‘brand’!)

As an aside, the queens/kings I know and know of are perfectly happy for their drag personas to be called ‘characters’. This differs completely from a trans person, where there is no ‘performance’ aspect. A drag performer themselves might be queer or trans and so on, but the drag character is separate to that.

This is my experience obvs, not everyone is the same

Yeah, I’m gonna need to take a look at all the drag queens I know, many are gendered “male” or “other”.