@IvanDobsky, @paulakreuzer and @Lotheric have suggested this idea and I have added the following new user script to my github repo:

Bear that in mind if you want to share an artist link with right‐click/copy, you will get the modified URL.
If many people prefer that the script does not modify the URL when right‐clicking, please comment in this ticket.

※ I will soon stop using greasyfork and openuserjs mirrors

Brilliant! Doesn’t seem to work for me at the moment though? Edit: It works, just not when I click on your forum link for some reason

While I have your brilliant mind handy, how hard would it be to indicate whether there are various artist releases somewhere before clicking the link? Like you’ve done with the cover art tab (tells you how many images are there before clicking).

That might be useful for people adding podcasts on MB.

Description: from an existing recording page, create a new release of Broadcast type containing only this recording (i.e. follow the official guideline for podcasts). 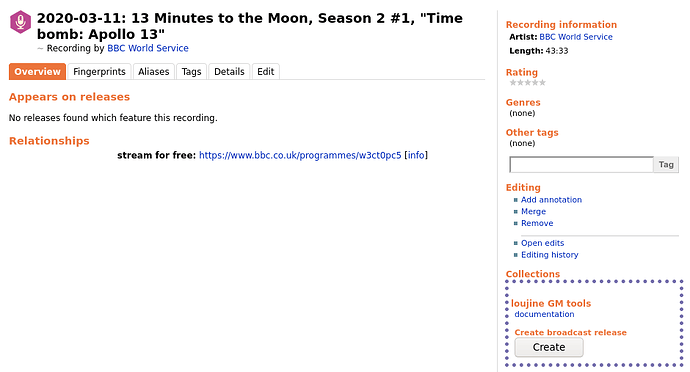 You should be able to just validate the “add release” edit, since all fields should be prefilled correctly: same release title and artists as the recording, track with the same title and same artist, using the preexisting recording (also copy the “streamed for free” link if existing) 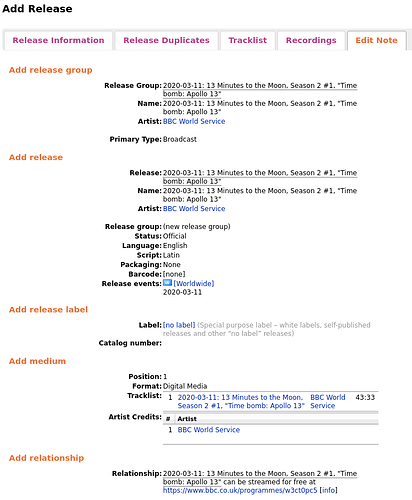 An often asked-for script: clone relationships from one recording to some others in the release editor.

Credits, attributes and dates should be cloned too; recording-recording and recording-work relations are skipped.

Ping me here or open an issue in case of trouble, I only tested a few basic cases

2 posts were split to a new topic: Need help creating a user script

I’ve got two userscripts to share with you all today.

ISWCNet is a great resource to find a bunch of work identifiers, but copy-pasting all of them into the work edit page is quite the chore. No more! When installed, it’ll add a button to each work in ISWCNet’s search results, and a button to each work edit/create page in MusicBrainz. Click the button on ISWCNet, switch to the edit page, click the button there, and spend the time you saved in other useful ways.

This script has been such a godsend that I honestly forgot that it was a userscript and not built into MB. Displays the dimensions of images on CAA inline, underneath each image. 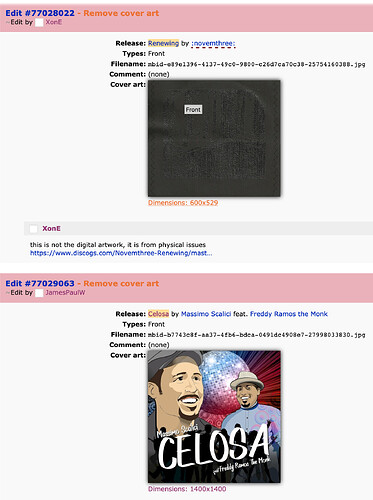 Can also be found on GitHub (direct install link).

To get these dimensions, the script loads the full-size images in the background. This can be a burden on your network, especially for pages with many images, so loading is deferred until the first time the image is visible on the page (i.e., it won’t load until you scroll to it). In addition, loading is aborted as soon as the dimensions are known, so effectively, only a small portion of the full-size image should actually be transferred for it to work.

A user script to improve handling of the green tagger button

A script that allows you to print your collection on paper sheets, nicely.
Ideal for second hand shops, feal markets, with your what you already own list, in hands:

Now my script is fully functional on collections. 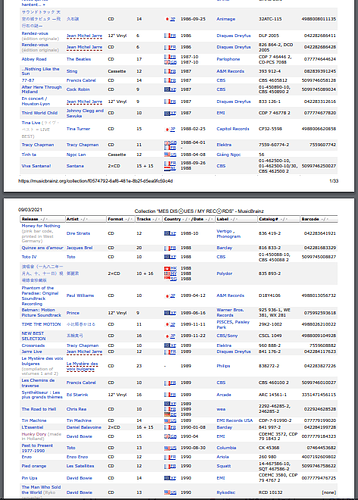 Announcing not one, not two, but three new userscripts that went live just a little while ago.

Have you ever noticed the vast amount of empty space on the right hand side of cover art edits? It’s free real estate. Let’s use it to supercharge voting on cover art edits! 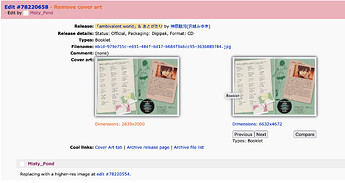 While voting on edits here, I began to notice potential bias in my reviews. There are often edits where I see a familiar name as the editor and think “Well I’ve never seen this person do a bad edit of this type before, so most likely this one will be fine too and I don’t have to check in depth as much as I usually do.” I decided to try to eliminate some of this bias, so I wrote this little script. It blinds out the editor’s name on open edits on which you have not voted, as well as the names of voters and the votes cast so far (to prevent peer pressure). Whenever you select a vote, the details are unblinded. I’m not sure whether it will provide a better or more reliable voting experience, but it’s a fun experiment nonetheless. Install here.

Since I’m probably the root cause of the rise in work attributes because of the work code importer, when I saw MBS-11535 and MBS-11537, I felt it to be my duty to provide a userscript as a temporary workaround. Not much else to say here, it does what it says it does

Should work on every page where work attributes are displayed. Install here. 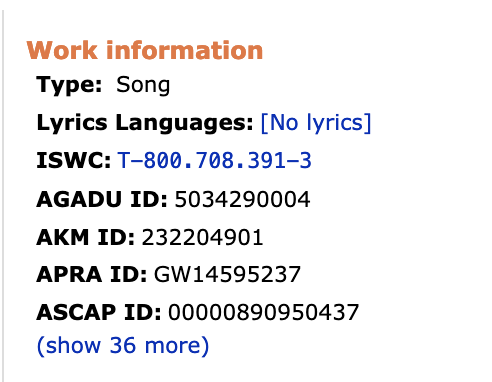 Problems? Feature requests? File an issue in the GitHub repo or reach out via IRC.

Can show a pop-up dialog enabling more detailed comparison between two images, either side-by-side, or in overlay mode (hover over the images to switch between two versions).

The work code script gets better and better with every update. Would it be possible to adapt it to the JASRAC service (http://www2.jasrac.or.jp/eJwid/)? It only gives the JASRAC ID and the ISWC, but filling those in + getting JASRAC in the dropdown still slows things down a lot.

I’ve grown a bit tired of seeing my desktop cluttered with covers of random releases after a short editing session.

Fairly straightforward: Copy an image URL, paste it in the text box, the userscript will download the image into memory and add it to the upload queue. It’ll attempt to figure out the correct image type via magic numbers (reused from MB’s own implementation) since some sites may use incorrect extensions.

Recommended to use in conjunction with maxurl to get the highest-quality images on various sites.

Download blob, turn blob into file, create fake “drop” event containing the file, trigger the drop event on the drop zone to coerce MB into adding it to the queue.

Now, if you’ll excuse me, I have a desktop to declutter. 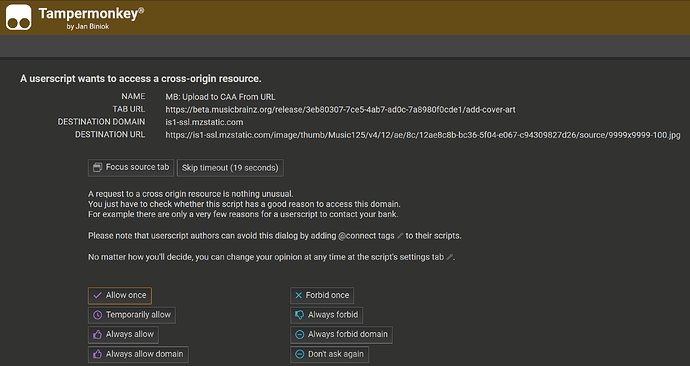 It sounds super great! I will use it on Linux.

@Lotheric, this is not needed on Windows, where the file selection dialog already manages URL.

Hmm, it seems Tampermonkey is warning when a userscript attempts to make a request to another domain, as sort of a CORS mechanism. It’ll probably ask again when entering another URL, or a URL on another domain. I’ve pushed a small update to the script, it’s not going to completely eliminate the problem, but according to Tampermonkey’s docs, it should allow you to click “Always allow all domains”, so that it shouldn’t ask it ever again.

Super excited about this. As you said, I have a giant pile of files sitting around that I downloaded and re-uploaded and then never care about again.

To celebrate my 1-year anniversary at MB, I’m releasing three smaller QoL userscripts which should hopefully save everyone a lot of time, clicks, and keystrokes. Just a small description of each, no screenshots today, sorry!

Add buttons to the release editor to select all “Update recordings” checkboxes. Differs from the built-in “Select All” checkboxes in that it doesn’t lock the checkboxes to a given state, enabling you to deselect some checkboxes. Comes in quite handy if you need to update most, but not all recording titles.

Display all tracks and releases on which a recording appears from a release’s tracklist. Makes it easier to check whether live or DJ-mix recordings are wrongly linked to other tracks. Saves you from having to open each recording separately and check the tracks. Note that they aren’t loaded by default, you can find a new button/link at the top of the tracklist (next to the “expand all mediums”, “display credits inline”, …) to load and display this information.

Seed the recording comments for the batch recording comments userscripts with live and DJ-mix data. Can save a bunch of keystrokes when setting live or DJ-mix disambiguation comments. DJ-mix comments are derived from the release title. Live comments are derived from “recorded at place”, “recorded in area”, and “recording of work” advanced relationships. Also uses Unicode punctuation by default. Should be able to handle US states and Canadian provinces. Should also be able to set individual comments when venues and dates differ per track. Note: Please carefully check the suggested comments, I haven’t tested this one in great depth and there are probably many ways things can break. Also requires the batch recording comments script to be installed and enabled, of course.

I have been using this heaps!
I was wondering if it’s feasible to make a couple of improvements?